FIND AN OFFICER BY SURNAME: – Click on the drop-down menu above to find a biography, or alternatively enter the surname in the Search box above to find all entries for that officer.

This section will eventually contain biographies of 1,200 officers who rose to the rank of admiral, or achieved success, fame or notoriety as post captains, during the period 1776-1815. Officer biographies will be added as and when the individuals appear in the Chronicle. 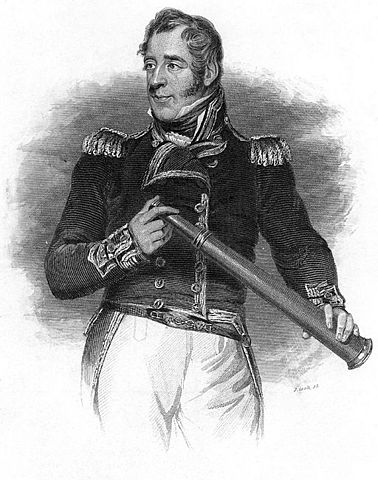 Lord Thomas Cochrane – one of the most famous officers of the time.

In a world where the population of her immediate continental neighbours was more than four times that of Great Britain, and where a succession of wars throughout the Eighteenth Century had pitted the country against those very European powers, an efficient and resolute Royal Navy was undoubtedly the nation’s most vital asset.

The Navy not only formed the country’s first line of defence against invasion from the continent, but its mastery of the seas allowed it to support the Army and any allies Britain could find in confronting her enemies across the globe. Its dominance of foreign waters in an ever opening world would also allow it to claim or capture lucrative overseas colonies that would fill the Treasury’s coffers and form the basis for the development of the British Empire during the Nineteenth century.

As such, the senior officers of the Navy were in the forefront of society. They swelled the ranks of the members of parliament. They found high office at the Admiralty. Victorious admirals such as Howe, Duncan and Nelson were treated to the adulation of the mob whenever they stepped ashore. Occasionally, as with today’s media, they would be taken down a peg or too, usually by the cartoonist James Gillray who never hesitated to lampoon the character failings of the great and the good. Nevertheless the Aristocracy would move heaven and earth to find a berth for their sons on the ships of reputed officers, knowing that once their feet were on deck a great career could await them.

It was not just the senior officers who found publicity however. Dashing frigate captains were the premiership footballer pin-ups of their day. Their exploits were revered in ballads and committed to canvas. Sir Edward Pellew’s fame and adulation in the ports of the West Country was on a par with Alan Shearer’s profile on Tyneside. When Lord Thomas Cochrane brought his frigate into Plymouth with three prize five feet high Mexican gold candlesticks adorning his mastheads it was the equivalent of Bobby Moore raising the World Cup. These naval officers were quite simply the heroes of their day.

No wonder the incomparable Keith Richards has a biography of Thomas Cochrane by his bedside! Even he must find these cats cool!

I hope you’ll enjoy learning about their exploits through this website and will feel inspired to read more.