@1740-1823. He was born at Castlerig, Fifeshire, the son of Alexander Schanck and his wife Mary Burnet, daughter of the minister of Moniemusk, Aberdeenshire.

His early time at sea was with the merchant marine before he entered the navy in 1758 aboard the Duke 90, Captain Thomas Hanway. Transferring after but a few weeks to the Shrewsbury 74, Captain Hugh Palliser, e remained wither until March 1763, being promoted from able seaman to midshipman during the last six months and seeing service at the reduction of Quebec, in the Mediterranean and on the Newfoundland station. 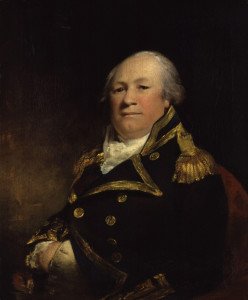 He continued his career as a master s mate in the Tweed 28, Captain Charles Douglas, going out to the Newfoundland station in 1763 where one of his shipmates was James Cook. On 10 January 1766 he passed his examination for lieutenant, joining the Emerald 32 with Captain Douglas which sailed to the North Cape of Lapland to observe the transit of Venus, although sadly the weather intervened and prevented any sightings. In 1771 he was aboard the Princess Amelia 80, flagship of Vice-Admiral Sir George Rodney in Jamaica, and next served with the Asia 50, Captain George Vandeput, going out to North America. During this period he famously saved the life of the drowning son of Sir Charles Whitworth, the eminent politician, when his boat overset in Portsmouth Harbour.

Schanck was finally commissioned lieutenant on 2 January 1776, and shortly afterwards was given command of the armed schooner Canceaux 6 in the St. Lawrence River. He was then placed in charge of the naval establishment at St. Johns, Canada, and this role was extended to cover the establishments at Quebec and Detroit. Over the subsequent months he built a number of vessels including the largest ship, the Inflexible 18, which he commanded at the Battle of Lake Champlain on 11-12 October 1776. Following the action he was one of three lieutenants to publicly condemn their senior officer, Commander Thomas Pringle, for his unsatisfactory conduct and rush to seek glory. Whilst attached to Lieutenant-General John Burgoyne s army in 1777, Schanck assisted with the construction and transportation of over seventy miles of floating bridges, most of which unfortunately fell into the colonists possession after the British defeat at Saratoga.

Schanck was promoted commander on 8 April 1780, and promoted captain on 15 August 1783 but he was not re-employed until the war of the French Revolution, although he was active in providing various designs to the Admiralty throughout the peace.

He married Margaret Grant, a sister of Sir William Grant, the Master of the Rolls by whom he had a daughter who married Captain John Wright in 1800 but died twelve years later.

Schanck was nicknamed Old Purchase , as by 1776 he had invented a cot fitted with pulleys which allowed the incumbent to hoist it up. He also successfully submitted to the Admiralty a scheme for a boat with a sliding keel which led to the construction of several vessels on similar lines, whilst in his role as superintendent of the coastal defences he advocated the setting up of the Sea Fencibles . He was well respected by his contemporaries and was a fellow of the Royal Society