Nowell joined the navy in 1769 aboard the Portsmouth guardship San Antonio 60, commanded by his patron, Captain Clark Gayton, who helped him achieve various appointments over the next few years. Whilst serving as commander-in-chief at Jamaica, Gayton commissioned Nowell as a lieutenant of the sloop Badger 12, Commander Charles Everitt, on 19 November 1776, which vessel returned to England in April of the following year.

Nowell next joined the Resolution 74, Captain Sir Chaloner Ogle, seeing service off the coast of Portugal and Spain, and forming part of the Channel fleet that undertook the controversial retreat in August 1779. She was later attached to Admiral Sir George Rodney s fleet that sailed at the end of the year to relieve Gibraltar, and she accepted the surrender of the Princesa 70 during the Moonlight Battle of 16 January 1780. Nowell was charged with taking possession of the Spanish vessel, a task that initially proved difficult when he was repeatedly felled by her flapping rigging whilst attempting to board her. Thereafter he had to battle three days of atrocious weather, and also had todeal with the trails of loose gunpowder that caused repeated explosions aboard the prize, but three weeks later he eventually got her into Gibraltar to be thanked by her Spanish officers, and with the promise of an introduction to the King of Spain come the peace. 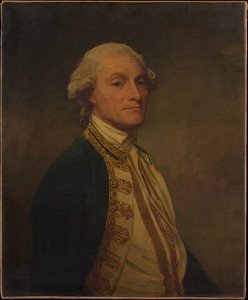 Nowell enjoyed the patronage of Admiral Sir Chaloner Ogle during his early career.

On the voyage back to England, with Lord Robert Manners acting as Commodore Ogle s flag-captain, the Resolution captured the Prot e 64 after a half hour action and without the loss of a single man. Shortly afterwards Nowell quelled a mutiny aboard the ship by punching the chief mutineer to the deck and threatening to run his sword through any other dissenter. On 13 July the Resolution sailed for North America with Rear-Admiral Thomas Graves squadron, and she then moved on to the Leeward Islands to join Admiral Sir George Rodney s fleet. During the capture of the Dutch island of St. Eustatius on 3 February 1781 Nowell was charged with negotiating the honourable surrender of the Dutch frigate Mars 38, although when he allowed her to fire her cannon as a signal of token resistance she was fired upon by several sail of the line including the Resolution.

He then to England aboard the sloop Swallow to rejoin his patron, the newly promoted Rear-Admiral Ogle, but when this officer could not find employment Nowell took a berth instead as first lieutenant of the Hercules 74, Captain Henry Savage, in which ship he fought at the Battle of the Saintes on 12 April 1782. Here his captain was wounded and obliged to quit the deck whilst engaging the enemy flagship Ville de Paris, whereupon Nowell assumed command for the remainder of the battle. With Savage hospitalised Nowell also refitted the Hercules at Jamaica. After sailing to North America with Admiral Hugh Pigot s fleet and then returning to the Leeward Islands, the Hercules departed for England at the peace and was paid off.

Nowell remained on half pay until he saw service between 1787-9 aboard the Edgar 74, Commodore Hon. John Leveson-Gower, as her second lieutenant. During the Spanish Armament of 1790 he was aboard the Queen Charlotte 100, flagship of Admiral Lord Howe, and having finally been promoted commander by that officer with seniority from 21 November he was appointed initially to recommission the fireship Incendiary 8, and he then commissioned the Woolwich 44, armed en flute, which he paid off in November.

In April 1791 Nowell was appointed to the brig Ferret 14, serving in home waters, and later going out to Jamaica where she delivered provisions to a population which had suffered immense depravations as a result of the civil war on Santo Domingo. Whilst employed ashore he was a witness to a number of atrocities, including the roasting of a mulatto chief. He was also employed at the end of 1791 by Captain Thomas Macnamara Russell of the frigate Diana 28 in seeking the repatriation of Lieutenant John Perkins, who was being held prisoner by the French at Jeremie under sentence of death for alleging supplying the blacks with weaponry. When a promise to release Perkins was reneged upon the Diana and Ferret visited Jeremie, and Nowell went ashore with drawn sword and one compatriot under the most perilous circumstances to force the three hundred Frenchmen to hand Perkins over.

The Ferret returned to England at the end of 1792, and she joined Rear-Admiral John MacBride’s squadron in the Downs at the beginning of the French Revolutionary War in 1793, capturing a number of prizes including the Jean Bart 6 and Jeune Marie off Dunkirk on 21 February, and the Fantaisie 8 on 15 April. She then served with the Channel fleet in its unsuccessful summer and autumn cruises, in the North Sea where she took a number of further prizes, and in attendance on the Royal Family at Weymouth. However, Nowell was badly injured and temporarily obliged to retire from active service when he banged his head and slipped into the sea whilst going aboard a cutter during a gale, causing severe impairment to his vision.

Nowell was posted captain on 24 October 1794 but thereafter remained unemployed for several years.

In the early summer of 1801 he resumed active service on being appointed to the Glatton 54, serving in the Baltic following her participation under the command of Captain William Bligh at the Battle of Copenhagen, and returning to England that autumn. He next commissioned the Isis 50 in the Downs, and in August 1801 he joined the Ardent 64 in which he commanded a squadron guarding the Thames estuary for the remainder of the war. The Ardent was paid off in the spring of 1802.

After a further long period on half-pay Nowell served as flag-captain to Rear-Admiral Thomas Foley aboard the Monmouth 64 in the Downs from 1811 until he himself became a rear-admiral on 4 December 1813. He was further advanced to vice-admiral on 27 May 1825, and he died at his home, Court Place, Iffley, near Oxford on 19 April 1828, leaving a widow, Sarah.

Nowell was well-built, strong and active, and apparently a great athlete who was a dextrous fencer and prodigious jumper. Legend had it that he could jump across the gateway of the Gosport Works, which were about twenty feet wide. He could be gloomy, yet was also fiery, and he was regarded as a fine officer and gentleman.