1763-1833. Of Irish descent, he was born on St. Kitts in the Leeward Islands, the fourth and youngest son of the Hon. John Davis Fahie, the judge of the vice-admiralty court at St Kitts, and of his wife, Sarah Georges.

Having been entered to the books of the Deal Castle 24, Fahie went to sea in August 1777 aboard the Seaford 20, Captain John Colpoys, serving in the Leeward Islands and after July 1778 in the Channel. He removed with Colpoys to the Royal George 100, flagship of Rear-Admiral Sir John Lockhart-Ross in November 1778. In October of the following year he joined the Sandwich 90, Captain Walter Young, the flagship of Admiral Sir George Rodney, in which he fought at the Moonlight Battle off Cape St. Vincent on 16 January 1780 and in the engagements with the Comte de Guichen in the Leeward Islands on 17 April and between 15 and 21 May.

Fahie was a native of St. Kitts, and he was present at the battle of the island inn January 1782

In August 1780 he was appointed acting-lieutenant of the Russell 74, Captain Robert Haswell, in which ship he was present under Captain Andrew Sutherland at the Battle of Fort Royal on 29 April 1781, and under Captain Hon. Henry Edwyn Stanhope at the Battle of St. Kitts on 25/26 January 1782. Here Rear-Admiral Sir Samuel Hood prevailed upon his intimacy with the island by asking him to go ashore and attempt to reach the besieged garrison, but on his second attempt he was obliged to surrender to the French. Nevertheless he was chivalrously released and rejoined the Russell at St. Lucia in time to participate in the Battle of the Saintes on 12 April where the ship was commanded by Captain James Saumarez. After that engagement he removed into the captured Ville de Paris 110, Captain George Wilkinson, and four months later sailed to North America aboard the Sibyl 28, Captain James Vashon. He then transferred into the Tartar 28, Captain William George Fairfax, and returned to Jamaica.

Fahie s commission as lieutenant was confirmed on 13 January 1783 but he remained unemployed for another ten years, bar a short period in 1790 as first lieutenant of the sloop Martin, Commander George Duff. During the years of peace he resided with his family at St. Kitts.

On the commencement of war with revolutionary France in 1793 he joined the Zebra 16, Commander Robert Faulknor, at Jamaica, taking part in the Leeward Islands campaign led by Vice-Admiral Sir John Jervis from 10 January 1794. He joined the intrepid Faulknor in his brilliant attack on Fort Louis, Martinique on 20 March before moving into the flagship Boyne 98, Captain Hon. George Grey, and he saw further boat service in the attack on Guadeloupe.

On 5 August 1794 Fahie was promoted commander of the Woolwich 44, an en-flute cruiser on the Leeward Islands station, and his promotion to post captain came on 2 February 1796 when he was appointed to commission the Perdrix 22, a recent capture from the French. Continuing to serve out of the Leeward Islands he effected the capture of the French privateer L Arme d Italie 18 in forty-two minutes after a sixteen hour chase off St. Thomas on 10 December 1798. Unfortunately however, his period of command was most conspicuous for the cold-blooded shooting of his temporary replacement, Lieutenant Charles Peterson, by Lieutenant Lord Camelford at English Harbour, Antigua, on 13 January 1798, on the flimsy excuse of mutiny. In August 1799 Fahie sailed for England with a convoy, and the Perdrix was broken up at Deptford.

He returned to St. Kitts and several years of unemployment before rushing back to England in 1803 upon the resumption of war with France. In April 1804 he was appointed to the Hyaena 28, a recently purchased Indian-built vessel, serving once more in the Leeward Islands and escorting a convoy to England. He was next appointed to the eighteen-pounder frigate Amelia 38 in the summer of 1805, serving once more in the Leeward Islands and taking a couple of well-laden Spanish prizes in December. With this vessel he assisted Vice-Admiral Sir John Duckworth in the destruction of the French ships of the line Imp rial 130 and Diomede 74 following the conclusion of the Battle of San Domingo on 6 February 1806. 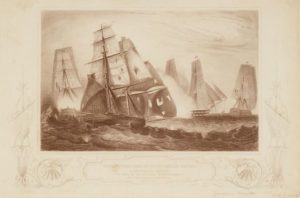 The capture of the Hautpoult 1808

In March 1806 Fahie joined the eighteen-pounder Ethalion 36 in which he was present with Rear-Admiral Hon. Sir Alexander Cochrane s squadron when it fell in with Rear-Admiral Willaumez, prior to the Frenchman s ships being dispersed by a hurricane on 18 August. He later assisted Cochrane in the capture of the Danish West Indian possessions between 21 and 25 December 1807.

He continued in the Ethalion until he was appointed to the Belleisle 74 in November 1808, superintending some of the landings at Martinique in January 1809 which resulted in the capture of the island on 24 February. In March he exchanged with Commodore George Cockburn into the Pomp e 80, which vessel was blockading three French ships of the line and two frigates in the roads off the Saintes. On 17 April, and with the gallant assistance of the sloops Hazard 18, Captain Hugh Cameron, and Recruit 18, Captain Charles Napier, he was able to bring the Hautpoult 74 to action, and with the further assistance of the frigate Castor 32, Captain William Roberts, and the perseverance of the Recruit he was able to capture her within ninety minutes. During the entire action Fahie convalesced on a chair upon his quarterdeck.

Four months later he was appointed to his prize which had been renamed the Abercrombie 74, and after Vice-Admiral Cochrane had sailed for North America in November he raised his broad pennant aboard her as a commodore in the Windward Islands. In early 1810, following Cochrane s return, Fahie directed some of the landings at the reduction of Guadeloupe on 6 February, and after taking possession of Basse-Terre with two hundred marines he commanded the naval forces with the rank of commodore at Brigadier-General George Harcourt s captures of St. Martins, Saba and St. Eustatius. By June he was on his way to England with a convoy, and in December he joined Vice-Admiral George Berkeley off Lisbon.

For the next three years Fahie remained in the alien waters of the Channel and off Spain before the Abercrombie was paid off in February 1814. The following year saw him appointed to the Malta 80 in which he joined the Mediterranean fleet, becoming senior officer on the coast of Naples and co-operating with the Austrian army during Napoleon s hundred days in power following his escape from Elba. In respect of these services the Kingdom of the Two Sicilies invested Fahie as a Commander of the Order of St. Ferdinand and Merit, whilst previously in 1814 he had been appointed a colonel of marines and in 1815 had been nominated a C.B.

He was promoted rear-admiral on 12 August 1819, and in January 1820 was appointed commander-in-chief in the Leeward Islands in succession to the late Rear-Admiral Donald Campbell, taking passage in the Tribune 36, Captain Nesbit Josiah Willoughby, and arriving in May. He flew his flag in the Salisbury 58, Captain John Wilson, until she was sent home in the summer of 1821 whereupon he shifted into the Pyramus 36, Captain Francis Newcombe. From September 1821-4 he was commander-in-chief at Halifax with his flag temporarily in the Forte 44, Captain Thomas John Cochrane, and once more in the Salisbury 50, Captain William Maude. In October 1824 he became a K.C.B. and on 22 July 1830 was promoted vice-admiral.

For the remainder of his life Fahie lived in the West Indies, and he died at Bermuda on 11 January 1833.

On 13 March 1786 he married Elizabeth Renee Heyliger of St. Eustatius with whom he had issue four daughters, and following her death in 1817 he married on 12 July 1823 the 17 year-old Mary Esther Harvey of Bermuda, a daughter of a member of the council for that island.