Fotheringham was initially employed in the merchant marine from 1757 before he was commissioned lieutenant on 13 December 1760.

He was promoted commander of the sloop Martin 14 in the Leeward Islands on 1 April 1765, and paid her off in April 1767. In October 1770 he recommissioned the Merlin 18, going out to Jamaica from Spithead in June 1771 and paying her off after arriving at Portsmouth in February 1773, having been obliged to cut away her mainmast after she was badly damaged by a violent gale off the Lizard.

Fotheringham was posted captain of the Garland 24 on 9 October 1773, which vessel also went out to Jamaica and returned to Spithead in June 1774, being paid off in the following month. 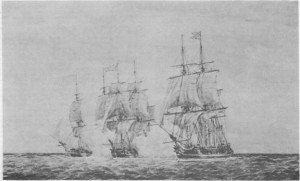 The capture of the Fox

In October 1775 he commissioned the new Fox 28, sailing for Newfoundland in March 1776 and returning to England to go around to the Nore in January 1777 in order to be refitted at Woolwich. During April she returned to Portsmouth from the Downs before going out to the Newfoundland station with the trade from Poole and Dartmouth.

The undermanned Fox was captured by the American ships Hancock 34 and Boston 24 on 7 June 1777, but Fotheringham was aboard the Hancock when she in turn was taken on 8 July, as was the Fox, by the Rainbow 44 and Flora 32. He returned with the Fox to Portsmouth from Halifax on 16 February 1778 and at his subsequent court martial aboard the Centaur 74 in the harbour on 3 March under the presidency of Admiral Sir Thomas Pye he was honourably acquitted..

He commissioned the new Resource 28 in July 1778, departing Portsmouth on 1 January 1779 for Jamaica with a convoy, and undertaking a mission to the Spanish Main. His final command was the Ruby 64, which he commanded from the beginning of 1781 with the flag of Vice-Admiral Sir Peter Parker at Jamaica.

During the summer of 1781 the home newspapers reported that Captain Fotheringham had died at Port Royal, Jamaica in May.

In 1773 Fotheringham took up residence at 15 Orange Street, London