Having served as a midshipman aboard the Plymouth guardship Carnatic 74, Captain John Ford, Hunt was commissioned lieutenant on 26 August 1789 following the King’s Naval Review on 18 August, and during the Spanish Armament in 1790 he served as the first lieutenant of Vice-Admiral Sir Alexander Hood’s flagship London 98, Captain William Domett.

He was promoted commander on 22 November 1790 and joined the fireship Tisiphone 8 when it was ordered to be recommissioned in March 1791, continuing with her when she was converted into an 18-gun sloop in the autumn of that year. Operating out of Portsmouth in the Preventative Service, he seized the cutter Kite off Berry Head in May 1792 with an illicit cargo of tobacco, and at the end of June sent another cutter into port with goods estimated to be valued at three thousand guineas. Weeks later he sent in a Dover cutter laden with silks, satins and tea. The Tisiphone was stationed off Weymouth in early September during the Royal Family’s annual holiday, and shortly afterwards came into Portsmouth having sustained significant damage to her masts, sails and rigging whilst on a secret mission to the coast of France.

At the end of January 1793 the Tisiphone returned to Portsmouth from Jersey, and in the middle of February, following the commencement of the French Revolutionary War, she took a convoy out to the west from the Hampshire port. On 5 March she captured the Marseilles vessel Outarde 12, loaded with brandy and soap, and she took her into Plymouth where both vessels were sent into the Stonehouse Pool to perform quarantine. Hunt’s command then joined a small squadron that was sent to defend the Channel Islands upon rumours, which proved to be false, that they were about to be invaded by the French.

He was posted captain of the Amphitrite 24 on 22 May 1793, going out to the Mediterranean that month with the fleet and serving at the occupation of Toulon from August. Unfortunately, his command went aground on uncharted rocks to the south-west of Leghorn on 30 January 1794, and as it proved impossible to haul her off she was set on fire. The court martial into the Amphitrite’s loss aboard the Victory 100 on 3 February acquitted Hunt and his officers of any blame.

Hunt served ashore with the naval brigade during the Corsican campaign from February 1794 where he commanded the batteries at the siege of Bastia, although there was some confusion with Captain Horatio Nelson of the Agamemnon 64 as to who led the seamen, and some further jealousy when Hunt was chosen as the officer to be sent home with despatches after Vice-Admiral Lord Hood had afforded him more credit than Nelson. Shortly after arriving in London Hunt was presented to the King at a St. James levee on 10 June. 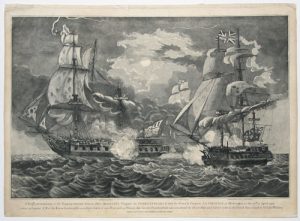 Towards the end of July 1794 he was appointed to the Concorde 36, with which he enjoyed an early success in the recapture from the French of a Danish East Indiaman. At the end of September the Concorde went up the Hamoaze at Plymouth, and she was back in the Sound by December awaiting the arrival of Commodore Sir John Borlase Warren, whose frigate squadron she had been ordered to join. At the beginning of 1795 she went out with the squadron from Falmouth, and when Warren returned on the 24th it was without Hunt’s command which had been left off Brest to secure a French vessel carrying naval stores from Bordeaux.

On 1 March 1795 the Concorde sailed under the orders of Captain Sir Edward Pellew of the Indefatigable 44 to serve with his frigate squadron off the French coast, and six days later this force captured fifteen vessels out of a French convoy near the Penmarcks, the Concorde accounting for nine of them as well as forcing the surrender of a cutter before that vessel took the opportunity to escape in thick weather. When the Indefatigable grounded off Cape Finisterre shortly afterwards the Concorde escorted her into Lisbon to effect repairs, and she was back at Falmouth by the beginning of June. On the 14th of that month she put out of Plymouth to join Commodore Sir John Borlase Warren’s expedition to Quiberon Bay, being charged with the escort to the Isle Dieu of a brig carrying munitions for the royalists in the Vendee and generally assisting the force until the late autumn. At the end of November Hunt was landed at Weymouth from where he took off for London with dispatches whilst the Concorde returned to Plymouth with several transports and was taken into dock for a refit.

Upon coming out of port and awaiting a fair wind, men from the Concorde assisted Captain Pellew in the dramatic rescue of passengers from the stranded Dutton at Plymouth on 26 January 1796. At the beginning of March she put out once more from Falmouth with Pellew’s squadron, and after she was present at the capture of the Unité 32 off Brest on 12 April she delivered the telling final broadsides at the capture of the Virginie 44 on 20 April, following the interception of that French frigate off The Lizard.

Whilst the Virginie was undergoing repairs at Plymouth Hunt was appointed her commander on 6 August, taking his first lieutenant, Robert Evans, with him and sailing from the Devonshire port at the beginning of November. Shortly afterwards the Virginie embarked on a cruise in Irish waters with the Jason 38, Captain Charles Stirling, during which Hunt suffered from ill health but oversaw the capture of a French transport off Cape Clear with some five hundred cavalry and twenty field pieces aboard. The two frigates than ran into the French invasion force headed for Ireland, and upon losing contact they headed straight for Spithead to report, arriving in the second week of January.

When the fleet mutiny broke out at Spithead on 26 April 1797 about thirty or so men attempted to rebel against the Virginie’s officers, although the majority of the crew remained loyal. Hunt was ashore at the time but the redoubtable Mr Evans continued in effective command, and he thwarted a threatened broadside from the mutinous Defiance 74 to keep the frigate on duty. Shortly afterwards the Virginie was ordered around to the Nore to join a small force of frigates that was to escort the newly married Prince and Princess of Wurttemburg, the former Princess Royal, Charlotte, from Harwich to Cuxhaven, the departure of whom was delayed by the mutiny spreading to that station. Upon reaching the Downs Hunt helped put down a mutiny aboard the Beaulieu 40, Captain Lancelot Skynner, before being sent to cruise off Kent to prevent the flight of any Nore mutineers.

At the end of September 1797 Hunt took the Virginie from Portsmouth over to Cowes to embark the new governor-general of India, Lord Mornington, and his suite for passage to India, and here Rear-Admiral Sir Hugh Cloberry Christian, who had been appointed commander-in-chief at the Cape, hoisted his flag aboard the Virginie. After remaining wind-bound for several weeks at St. Helens they sailed in mid-November to arrive at the Cape on 28 January 1798. On passage they were chased by what was perceived to be a larger French ship and were forced to jettison a good deal of cargo, reportedly including the governor-general’s carriages, before the stranger was identified as the homeward-bound Intrepid 64, whose captain, Robert Parker, had recently drowned at sea.

Leaving the Cape on 20 February, the Virginie arrived at Madras on 27 April from where she delivered Lord Mornington on to Calcutta. In the Ganges River Hunt fell ill to a fever that took the lives of seventy-five of his crew, and he died at Fort William on 10 August. He was buried in West Park Cemetery, Calcutta.

Hunt was well respected and liked by his men, and his death was greatly mourned by Lord Mornington who described him as ‘amiable’. Earlier, newspaper reports had described him as spirited and skilful.