c1725-76. He was the father of Vice-Admiral Sir James Nicoll Morris. 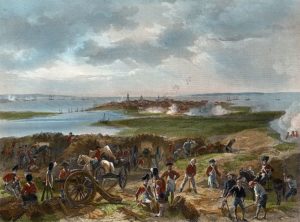 Morris was fatally wounded at the Battle of Charleston in 1776

Morris was commissioned lieutenant on 10 July 1755 and promoted commander on 7 January 1771 of the sloop Lynx at Chatham, removing shortly afterwards to the sloop Otter 14. He was employed on the Newfoundland station until paid off in November 1773, sailing out in the early summer and returning each early winter.

On 15 October 1775 he was posted captain and appointed to commission the new Bristol 50 at Sheerness, going out to North America from Cork in February 1776 with the broad pennant of Commodore Sir Peter Parker.

Whilst commanding the Bristol on the unsuccessful attack on Charleston on 28 June 1776 Morris had two bones in his forearm shattered by a chain-shot which necessitated an amputation above the elbow, and also suffered another wound to his neck. Astonishingly he demanded to be taken back on deck, only to receive a further wound to the body, to which he succumbed after being moved to the hospital ship Pigot on 5 July.

A government pension of £100 was awarded to his widow, Elizabeth, and in addition to his son he left two dependant nephews and a dependent niece.

Morris was a protégé of Admiral Hon. Samuel Barrington who following his untimely death took great notice of Morris’ son.