On 3 May 1776 Lieutenant-General Sir Henry Clinton assumed command of a British army of four thousand men, part of which had recently arrived off Cape Fear, North Carolina, after a torturous two-month voyage under the escort of Commodore Sir Peter Parkers squadron from its assembly port at Cork, and the remainder of which had been brought south under his command from Boston. Clinton’s instructions from the unpopular secretary of state for the colonies, Lord George Germain, were to support the loyalist campaign in the southern American colonies, a strategy which caused much consternation to Vice-Admiral Viscount Howe and General Sir William Howe, who would have preferred the troops to join them at New York. Having been informed that the defences at the strategic port of Charleston were still under construction, Clinton was persuaded by Commodore Sir Peter Parker to open the campaign with an attack on that town by the combined army and naval forces. 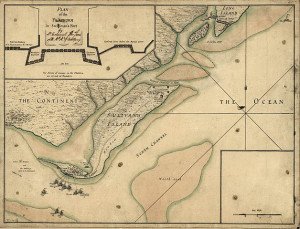 Charleston, the principal city of South Carolina, lay on a peninsula with a large natural harbour, protected by batteries to the north on Sullivan’s Island and to the south on James Island, and at the entrance some further way to the south by a lengthy sandbar. The channel running in from the bar made a passage to the north; hence Sullivan’s Island had been selected by the rebels for the hasty erection of their principal defence, an apparently embryonic structure which was named Fort Moultrie in honour of its commander.

When the British arrived off the bar on 4 June, a month later than had been intended due to a delayed departure followed by mid-Atlantic storms, they were unable to take advantage of the spring tides. Although the frigates and other vessels crossed the bar on the 7th, the heavier pennant ship Bristol 50 was required to remove her cannon into the transports before she could cross three days later. By the 15th all the troops had been landed on Long Island with the intention of fording the channel between Sullivan’s Island, immediately to their south, and the mainland in order to take the land batteries. With the cannon being returned to the Bristol, all that was required to launch the attack on Charleston was a favourable wind. But unfortunately, Clinton has been misinformed as to the depth of the channel – instead of a mere eighteen inches it was as deep as seven feet in parts, the discrepancy being explained by the effect of the prevailing winds on the its depth. With the Americans also setting up an artillery emplacement opposite the proposed landing beach it was left to the Navy to undertake the assault, and it little helped that the confusion had allowed more Americans to arrive and bolster the defence directed by Major-General Charles Lee, although it did at least allow for the arrival on the 25th of the Experiment 50, Captain Alexander Scott, which was also obliged to unload her cannon before crossing the bar.

After several false promises, the wind arrived on Tuesday 28 June, and having been signalled to weigh anchor at 10 a.m., the Active, Bristol, Experiment, and Solebay moved into their positions three hundred and fifty yards below Fort Moultrie on the western end of Sullivan’s Island forty-five minutes later. The remainder of the squadron consisting of the frigates Actaeon 28, Active 28 and the sloop Sphinx, were sent to take up a superior position to the west in order to protect a fireship attack and both cut off supplies to the fort and any subsequent retreat from the fort.

Two facts immediately became apparent to the capital ships attacking the batteries. Firstly, the waters before the fort were too shallow for the ships to work in as closely as they would have wished, and secondly the unprepossessing fort was in a far better fighting condition that the British had been led to believe. Evidently the rebels had prepared well whilst waiting for the impending attack. At 11.15 a.m. the British men of war commenced their bombardment, the bomb-vessel Thunder being actively engaged in deploying her shells into the fort, although most landed safely in the vast quantities of sand about the defence, and her two mortars were later incapacitated after an artillery colonel aboard her ordered that more powder be used. Once the British came easily into range the rebels replied with their twenty-one pieces of artillery from Fort Moultrie that guarded the channel, and the duel became particularly ferocious.

Although the British ships fired at seven times the rate of the Americans the latter were more accurate. During the day-long engagement two British ships, the flagship Bristol and the Experiment, suffered most severely, sometimes from red-hot fire, although the frigates were spared the cannonade due to the American lack of ammunition. In return the two larger ships caused little discomfort to the rebels, whose fort constituted of palmetto logs and sixteen feet of earth, with the embrasures being high enough to prevent the sailors in the British fighting tops from picking off easy targets with their musketry.

In time Fort Moultrie’s fire slackened as the last reserves of powder were saved for Clinton’s expected assault, and between 2pm and 3.30 pm the American cannon did not fire at all. Their situation was helped somewhat by the fact that the detached two frigates and a sloop in attempting to reach their position to the west had run afoul of each other and run onto a shoal known as the Middle Ground, Parker later blaming the ignorance of the pilot for this catastrophe. The sloop Sphinx, having lost her bowsprit, and the Siren 28 got off at 1.30, but the third, the Actaeon 28, remained fast. 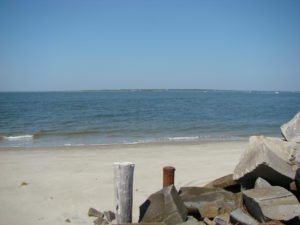 With the tide on the ebb the Bristol let go astern her small bower in order to prevent her swinging round with the tide, but at about 4pm the fort’s renewed fire parted the spring on her cable and the pennant ship swung around to her best bower, allowing the rebels to rake her again and again. A young midshipman, James Saumarez, made three attempts to replace the spring before the situation could be resolved. One shot took off the arm of her captain, John Morris, and shattered his other hand, these being his fourth and fifth wounds respectively. Nevertheless, he bravely returned to the deck where Commodore Parker was the only officer still standing, albeit having suffered the indignity of seeing his breeches torn off by the passage of a cannonball, and then Morris received another shot which later cost him his life. Even so, the British did not let up their fire and frequently drove the rebels from their guns, but with the latter being able to throw reinforcements into the fort unhindered following the failure of the detached vessels to reach their station, the batteries thereafter never remained silent for long. Consequently, after ten hours of constant action there was nothing for Parker to do but retreat, which he did on the ebb tide at 9 p.m. During this retreat the Active 28 grounded, but was got off, albeit that she had no ammunition left.

Next morning the crew of the Actaeon set fire to their ship and abandoned her after receiving further damage. With incredible nerve the Americans then boarded her and fired three guns at the British squadron before making off with her bell and her flag, the latter removal causing much distress to her erstwhile crew. Shortly afterwards she blew up, and she continued to burn fiercely until the waves lapped above her remaining charred timbers.

The Bristol suffered forty men killed and seventy-one wounded in the thirteen-hour battle as well as losing her main and mizzenmasts. Captain Morris died of his wounds aboard the hospital ship Pigot four days later, whilst Lieutenants Tobias Caulfield, Anthony Molloy and Charles Nugent were wounded. The Experiment suffered twenty-three men killed and fifty-six wounded including Captain Scott who lost an arm. The squadron was withdrawn on General Clinton’s orders that night, having in total suffered sixty-four men killed and one hundred and forty-one wounded against the American losses of twelve killed and twenty wounded. At least some skill was shown in getting the ships back over the bar, and three weeks later Clinton’s troops were re-embarked.

Parker was later castigated for advocating the attacking in the first place and then not bypassing Fort Moultrie to attack the less well defended city. It was also felt that the two services had not co-operated to the best of their ability. To add to his problems, Parker’s detractors in London ridiculed him in song. As the reduced squadron left Charleston on 3 August and made the best of its way to New York to join Lord Howe on 14 August, his seamen however spoke of the tenacity of the American defence with respect.

The despatches concerning the assault on Charleston were carried home by Captain Charles Hope of the armed ship Friendship, whilst Lieutenant Caulfield was posted captain of the Bristol in the stead of the late Captain Morris, and Lieutenant Molloy was promoted to the rank of commander and appointed to the Thunder in place of Commander James Reid who was also posted captain. Lieutenant Ambrose Reddall, who had fought the Experiment in the place of the wounded Captain Scott, was taken aboard the Bristol as her second lieutenant and shortly afterwards he too was promoted commander