Drawing on over two hundred and fifty published sources, the work is a comprehensive and readable reference guide to the golden age of Naval History from the commencement of the American War of Revolution in 1776 to the termination of the Napoleonic Wars in 1815. It is in two parts, and in addition there is an Appendices page:

By the end of the project this will contain biographies of over 1,200 officers who rose to the rank of admiral, or achieved success, fame or notoriety as post captains, during the period 1776-1815.The vast majority are not included in the Dictionary of National Biography

A sample of officers to be included in the dictionary are:

The great admirals such as Nelson, Rodney, Howe, St. Vincent, and Hood. 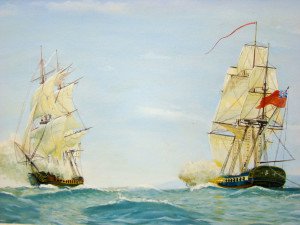 By the end of the project this will consist of approximately 500 articles on operations and events for the years 1776-1815. Each year of the Chronicle will begin with an historical overview of the year, followed by the events in chronological order, with lists, where applicable, of participating ships, admirals, captains and casualty figures where appropriate.

Example operations and events are:

Over 40 fleet battles and actions such as Trafalgar in 1815, Ushant in 1778, the Saintes in 1782, St. Vincent in 1797, the Nile in 1798 and the Glorious First of June in 1794.
Famous single ship actions, including the Chesapeake v Shannon in 1813, the Serapis v Bonhomme Richard in 1779, the Nymphe v Cl op tre in 1793, and the Mars v Hercule in 1798.
The great fleet mutinies of 1797, the mutiny on the Bounty in 1789, and the bloody affair of the Hermione, also in 1797.
Disasters such as the sinking of the Royal George in 1782, the wreck of the Lutine in 1799, and the fire aboard the Queen Charlotte in 1800.
Huge combined operations to invade Egypt in 1801, Philadelphia in 1777, and the Schelde in 1809.
Voyages of exploration to the Pacific, Canada and Australia by Cook, Vancouver and Flinders.
Court martials investigating such incidents as the marooning of a boy seaman on a desert island in 1810, or the captain accused of murder when leading a press gang in 1794.
Curiosities including the tale of a young British lieutenant who found himself summoned to Paris during the midst of the Revolution to be crowned with a civic crown, Sir William Sidney Smith s defeat of Napoleon Buonaparte ashore at Acre in 1799, and the assault on a British flagship by an American submarine in 1776.
Prisoner of War escapes, including Smith s from the Temple in Paris in 1798.
Smaller actions such as the celebrated Cornwallis Retreat of 1795, Pellew s hounding of a French sail of the line to its loss in 1797, and a fireship attack on Gibraltar in 1780.
Political events, such as Lord Hood s notorious Westminster election campaign of 1784, Lord Cochrane s trial and imprisonment in 1814, and the Earl of St. Vincent s assault on the Navy Board in 1802.
Sir Edward Pellew astonishing feat of bravery in bringing off the passengers and crew of the wrecked transport Dutton off Plymouth in 1796, and a midshipman s daring rescue of stranded Frenchmen from Arab cut-throats two years later
The cutting out of the Chevrette in 1801 and the Hermione in 1799.
Coastal assaults typified by Nelson s on Boulonge in 1801, and Smith s in the Brest Roads in 1795.
Enriching or eventful cruises such as that enjoyed by Lord Cochrane off Catalonia in 1808, and treasure captures from the Spanish in 1799 and 1804.
Campaigns and expeditions on the North American lakes, in the East Indies and on the coast France.

Here you will find listings of relevant government officials and commander-in-chiefs by station, honours earned by the 1,200 officers, and lists of those officers who served as MP s.

Why is the work useful

Do you want to know more about the fictional Jack Aubrey s great friend Heneage Dundas Then learn that, amongst many other adventures, he survived the burning of the Queen Charlotte off Leghorn on 17 March 1800, and indeed was most active in fighting the fire. In the same article you will discover that Lord Cochrane fortuitously survived the fire that killed so many of his shipmates, because he was acting as a prize master of another vessel at the time.
Naval enthusiasts will know that the pious and cautious Admiral Lord Gambier failed miserably to destroy a French fleet at the Battle of the Basque Roads in 1809, but will be surprised to discover that he was the most belligerent captain at the Battle of the Glorious First of June just fifteen years before.
You ll find out why the Lutine Bell came to find itself at Lloyds of London, what caused the Americans to paint the White House white, and even why the gallant Pellew s son was given the unfortunate middle name of Bastard!

Who will find the work beneficial

The work should aid not only naval historians, but also interest enthusiasts who read the Hornblower and Jack Aubrey books and simply wanted to learn more about the real-life heroes of the period.

Why is the work different to the others

This work fills the gaps which other biographers of this era do not cover. The contemporary works, such as those by Charnock, Marshall, O Byrne, and Ralfe were written whilst many officers were still alive, or only covered part of the period 1776-1815. The work is also unique in so much that upon reading a biography you can obtain further detailed information regarding events in that officer s life by cross-referencing to the Chronicle.

Because almost every work of this period is named after the great admiral but as this work will show there were over a thousand other heroes men just like Nelson whose bravery, gallantry and heroism was a product of their time and whose discipline, professionalism and self-confidence emanated from the great admirals who had shaped the Navy such as Howe, Hood, Duncan and Jervis.