1757 -1833. He was the second son of John Foley of Ridgeway, Narbeth, Pembrokeshire, a country gentleman of modest means, and of his wife, Bridget Herbert. An uncle, Captain Thomas Foley, had sailed around the world with Captain George Anson’s expedition in the early 1740’s.

In 1770 Foley entered the Navy aboard the sloop Otter 14, Commanders William Williams and John Morris, serving on the Newfoundland station, after which he transferred in November 1773 to the Spithead-based guardship Egmont 74, Captain Edward Jekyll. Within four months he had joined the Antelope 50, Captain Archibald Dickson, which went out to Jamaica as the flagship of Rear-Admiral Clark Gayton. Here in August 1775, he joined the Racehorse 18, Commanders James Orrok and James Reid, engaged in protecting the trade in the Windward Passage. He also commanded various small gunboats against the American privateers in the Caribbean and sailed up the Mississippi as acting-lieutenant of the sloop Atalanta, Commander Thomas Lloyd, to which he was appointed in April 1776. For a short period from April 1777, he was aboard the troop transport Lord Amherst, Commander Francis Hartwell, and then a move back to the Antelope followed before she returned to England in May 1778. 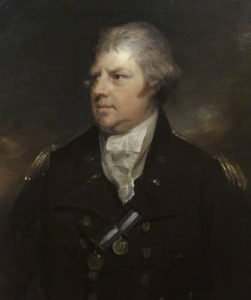 Having been commissioned lieutenant on 25 May 1778, Foley next served in the Channel fleet aboard the America 74, Captain Lord Longford, and was present at the Battle of Ushant on 27 July, and in the Channel fleet retreat of August 1779. In October 1779 he joined the Prince George 98, Captain Philip Patton, the flagship of Rear-Admiral Hon. Robert Digby, in which he and Richard Keats befriended the young Prince William. On 8 January 1780 he was present at the Moonlight Battle off Cape St. Vincent and thereafter at the relief of Gibraltar. In the late summer of 1781, the Prince George took Digby’s flag to North America and she afterwards served in the Leeward Islands under Rear-Admiral Sir Samuel Hood at the Battles of St. Kitts 26 January and of the Saintes on 12 April, where she was commanded by Captain James Williams.

For three weeks in October 1782 Foley temporarily commanded the Warwick 50 at New York in the absence of Captain Hon. George Keith Elphinstone, and on 1 December he was promoted commander of the Britannia 20 at New York, moving two weeks later to the Otter 14, which he retained until the following spring.

From March 1783 he commanded the Atalanta 14, bound for Quebec and returning to Portsmouth in January 1785 with the governor, Lieutenant-General Frederick Haldimand, prior to being paid off in the following month. In December 1787 he recommissioned the sloop Racehorse 16, serving off north-east England, and on 21 September 1790 he was posted captain of the Concorde 36, retaining her until November.

In February 1793, following the commencement of hostilities with France, Foley was appointed to the St. George 98 as flag-captain to Rear-Admiral John Gell, going out in April with the East India convoy, and then cruising off Cape Finisterre where he acquired a huge fortune with the capture of the French privateer Le Gènèral Dumourier and her prize, the Spanish galleon St. Jago, his share being £50,000 or approximately £8m in today’s money. He thereafter served at the occupation of Toulon from August. In early 1794 the St. George flew the flag of Vice-Admiral Sir Hyde Parker off Toulon, and in this capacity she assisted in driving ashore a French squadron in the Golfe Jouan on 12 June. The St. George fought at the Battle of Genoa on 13-14 March 1795, losing four men killed and thirteen wounded, and the Battle of the Hyères Islands on 13 July.

In January 1796 Foley moved with Parker to the Britannia 100, having exchanged with Captain Shuldham Peard, and he was afterwards flag captain to Vice-Admiral Charles Thompson on the same vessel. On 14 February 1797 he fought at the Battle of Cape St. Vincent, where Thompson was second in command, but with the Britannia proving old and slow she was barely engaged and suffered only one man wounded. Shortly afterwards, on 23 March, Foley transferred into the Goliath 74, ostensibly to obtain order over her crew, the previous incumbent, Captain Sir Charles Knowles, having been branded an imbecile by Admiral Lord St. Vincent. From 3 to 10 July, he provided cover to the bomb-vessels in their bombardment of Cadiz.

In late May 1798 the Goliath, which by now was regarded as one of the most proficient men of war in the fleet thanks to Foley’s management, was detached with Captain Thomas Troubridge’s squadron to reinforce Rear-Admiral Sir Horatio Nelson in the Mediterranean. At the Battle of the Nile on 1 August she led the line and performed brilliantly by engaging the unprepared French on the shore-side, quickly forcing the surrender of the Conquérant 74, and then unleashing a 68-pound howitzer shell that sunk the Sérieuse 36 after that frigate had attempted to enter the fray against all precedent. During the battle the Goliath suffered casualties of twenty-one men killed and forty-one wounded. Foley remained off Aboukir after the battle under the orders of Captain Sam Hood in blockade of two Venetian 64’s and eight French frigates, before sailing to join Nelson at Naples. The Goliath later served at the blockade of Malta until she returned to Spithead and entered quarantine in early November 1799 prior to entering port to be paid off, whereupon Foley went up to London to be presented to the King.

In December 1799 he was appointed to command the Elephant 74, and after commissioning her at Portsmouth on 6 January 1800 he served in the inshore squadron off Brest under the orders of Rear-Admiral Sir Robert Calder. In March 1801 he sailed from Yarmouth to join the fleet under Admiral Sir Hyde Parker that had been formed to tackle the Armed Neutrality, and prior to the Battle of Copenhagen on 2 April he thrashed out the plan of attack with Nelson and Captain Edward Riou. During the battle the Elephant served as Nelson’s flagship, and Foley became the recipient of the admiral’s famous comment ‘I have only one eye, I have a right to be blind sometimes. I really do not see the signal!’ The Elephant was one of several British ships to ground in the moments preceding the attack, and by the end of the day she had suffered casualties of ten men killed and thirteen wounded.

In September the Elephant returned to Torbay from a cruise, following which she was sent out to the West Indies in October under the orders of Commodore William Essington. However, Foley, along with Captain Thomas Fremantle, was invalided home from Jamaica aboard the frigate Ambuscade 36, Captain John Colville, to arrive at Portsmouth on the following 19 January.

Whilst he was recuperating during the peace Foley played host to Nelson and Lady Hamilton when they visited Wales in July 1802, and in September 1805 Nelson offered him the post of captain of the Mediterranean fleet, but his ill health obliged him to turn down the position. Remaining out of employment, he was appointed a colonel of marines on 2 October 1807, and promoted rear-admiral on 28 April 1808.

After eventually recovering his health Foley became the commander-in-chief of the hectic Downs station in 1811, hoisting his flag on 14 March aboard the Freya 38 at Deal, and then flying it on a permanent basis aboard the Monmouth 64, Captains Hyde Parker, William Nowell from April 1812 and William Wilkinson from December 1813. Spending most of his time ashore in Deal, he received his old friend Prince William, the Duke of Clarence, during October 1811, the Prince of Orange in November 1813 and the Duke of Clarence once more in January 1814. Shortly into his tenure he was criticised for the number of captures made by the French on his station, to which he laid the blame fully on the merchantmen for sailing too close into the enemy coast. On 12 August 1812 he was promoted vice-admiral, and on 21 April 1814 his squadron, including the royal yacht Royal Sovereign, Jason 32, Captain William King, and French Polonais 74, escorted the restored King Louis XVIII from Dover to France in company with the Duke of Clarence. Foley finally struck his flag from the Monmouth on 27 October 1814.

Admiral Foley died after a long illness on 9 January 1833 at Admiralty House on the High Street in Portsmouth, and he was buried in the Garrison Chapel in a coffin made from oak that had been retrieved from the Elephant.

On 31 July 1802 he married the plain but affable and lively, hospitable and very charitable Lady Lucy Fitzgerald, the youngest daughter of the Duke of Leinster, but had no issue. His wife was the sister of the famous revolutionary, Lord Edward Fitzgerald, who died from wounds when resisting arrest in June 1798, and she fully supported and abetted his wish for a United Ireland. Foley and his wife lived on his estate at Abermarlais Park, near Llandovery, Carmarthen, which he had purchased in 1795 with the proceeds earned in the capture of the St. Jago. His wealth allowed him to be a lavish entertainer, and he also owned a house in Manchester Square, London. His nephew Osborne Foley, who entered the service in 1812, was promoted captain on his death in 1833 in his honour.

Foley was over six feet tall, cut a fine figure, and had handsome good-humoured features, light brown hair that was to turn grey early, and blue, gentle or eager eyes, dependant on his mood. He was even-natured, worldly-wise, genial and kind, with a massive inner strength of mind. St. Vincent described him as of sound and excellent understanding, great temper and pleasant wit , and thought him competent. He took great care of, and a great interest in, his midshipmen, could be firm, was loud and had a bluff manner which highlighted a lack of social graces. He could also be risqu , and Betsy Wynne, Sir Thomas Fremantle s future wife, soon tired of his personality when her family sailed on his ship in the Mediterranean during 1796. His common sense helped temper the somewhat unruly Prince William during their early friendship.