Jacobs was commissioned lieutenant on 22 November 1752 and promoted commander of the sloop Escort 14 for purposes of rank only on 13 June 1757. From 16 June he had the new sloop Alderney 10, which arrived at Plymouth from Wales with a convoy later that month, and she was engaged on the same duty during October. 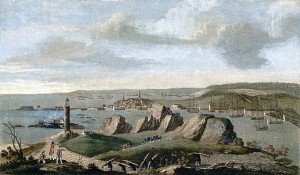 Captain Jacobs had a narrow escape from death at the Siege of Louisbourg in 1758. It may have saved a lot of trouble thereafter if the shot had been more accurate.

He was posted captain of the Kennington 20 on 4 January 1758 in place of the indisposed Captain Dudley Digges, serving initially off France, from where she arrived at Portsmouth with other men-of-war on 10 February to join Admiral Hon. Edward Boscawen’s North America-bound fleet. Sailing with the transport Essex from Plymouth for Halifax, the Kennington touched at Madeira to take on wine for Boscawen’s force, and she subsequently served at the capture of Louisbourg in July where Jacobs was fortunate to survive the path of a round shot which tore the skirts of his coat. During the winter the Kennington was harboured at Halifax, and she returned to Portsmouth on 3 March 1759 with the recalled Major-General James Abercrombie on board as a passenger.

Jacobs commanded the frigate Actaeon 28 from 4 June 1759, serving with a small squadron in Quiberon Bay during the autumn, and he was at Plymouth in early November before leaving her in December. On two separate occasions, Commodore Thomas Hanway at Plymouth investigated Jacobs on accusations that he had ill-treated his men, and although the charges were proved, it was accepted that his intentions were not cruel, but rather that he had been too harsh in attempting to teach the hands their duty.

In March 1768 Jacobs recommissioned the Deal Castle 24, going out to North America from Cowes in early June, and she remained on that station until arriving at Spithead from Boston in early July 1772 to be paid off.

He remained unemployed for the next three and a half years before commissioning the new Amazon 32 in February 1776, which prior to sailing for North America was taken into dock at Chatham to be copper-sheathed. Departing for Portsmouth on 12 May, she sailed from that port on 26 June with a convoy of transports carrying German troops for Halifax and Quebec, arriving at the latter port in mid-September.

Cruising off New York in the early spring of 1777, the Amazon sent a 10-gun privateer into the city after capturing her, and she entered New York on 13 August with the Orpheus 32, Captain Charles Hudson, and Juno 32, Captain Hugh Dalrymple, after a successful cruise in which they had taken at least eighteen prizes. She participated in the defence of New York in July 1778 and on 5 August drove the privateer Wilkes 14 ashore. After departing New York on 28 December, she arrived at Portsmouth towards the end of January 1779 in company with the Bedford 74, Captain Edmund Affleck, whereupon she went around to the Nore to be paid off in February.

On 20 March 1779 Jacobs was appointed to the Defiance 64 in place of Captain Samuel Granston Goodall, who was attending the court martial which investigated Vice-Admiral Sir Hugh Palliser’s conduct at the Battle of Ushant. The Defiance went out of Portsmouth Harbour for Spithead on 6 April, but as she was on the point of sailing from Torbay for North America in May with Vice-Admiral Marriot Arbuthnot’s convoy, a mutiny broke out aboard her with the crew directing two 36-pound cannons against the marines of other ships who had been sent aboard to subdue them. The men, being fully aware of Jacobs’ poor reputation, and apparently having been misinformed as to their destination, had previously written to the first lieutenant seeking his support, claiming that under the new captain they were destined to live in ‘oppression and poverty’. The mutiny was suppressed under Arbuthnot’s direction, but only after news of its occurrence had been sent to the Admiralty, and when the convoy did eventually sail, it was temporarily diverted to the defence of Jersey before the Defiance arrived at Quebec towards the end of August with her portion of the convoy, having not lost a single ship on the passage out. It would later be reported that five of the crew had been hung for their part in the mutiny.

Remaining in North American waters, the Defiance joined the fleet that set out from New York in December to undertake the eventual capture of Charleston on 11 May 1780, but in the meantime, on 18 February, she was wrecked on the Savannah Bar after Jacobs had ignored the pilot’s recommendations when she had broken loose from her anchorage near North Edisto. All the crew were saved, as were her guns and stores. Having been brought to a court martial on 22 May, Jacobs was found culpable for her loss and ‘dismissed during pleasure’, whilst the pilot was rendered incapable of undertaking his trade again.

Thereafter, although he was restored to his rank by Order of the Council on 15 December 1780, Jacobs did not receive any further employment, and he officially retired from active service along with a number of other officers in 1786, receiving the pay of a superannuated captain.

Jacobs had been married with a son and daughter.

At the time of the Defiance mutiny, it was reported that he was remarkable for his outrageous and brutal conduct, and that rather than submit his men to any trial, he would inflict an appropriate punishment on them himself. There were also dark mutterings that the hands could not accept him as he was a ‘foreigner’. Despite his poor reputation, he was regarded as a brave and experienced seaman.