In 1745 Pearson joined the Dover 50, Captain Hon. Washington Shirley, moving afterwards to the Seaford 20, commanded by his cousin Captain John Wilson, and three years later the Amazon 26, Captain Arthur Gardiner. He left the navy to join the East India Company in 1750 but returned five years later, and on 16 December 1755 was promoted lieutenant of the Elizabeth 64, Captain John Montagu, seeing service off France.

In 1757 he went out to the East Indies aboard the Elizabeth under Captain Charles Steevens, and on that station he was severely wounded in action against the French. He was afterwards a lieutenant aboard the Norfolk 74 under Steevens and Captain Richard Kempenfelt, and he temporarily commanded the ship on the latter s incapacitation during a fierce hurricane on 1 January 1761. For this service he received the commendation of the promoted Rear-Admiral Stevens and was promised a command at the earliest opportunity, but unfortunately his patron died before this promise could be fulfilled. In 1762 Pearson served at the reduction of Manila as first lieutenant of the Lenox 74, Captain Robert Jocelyn, before returning home in the Seahorse 24, Captain Charles Cathcart Grant. 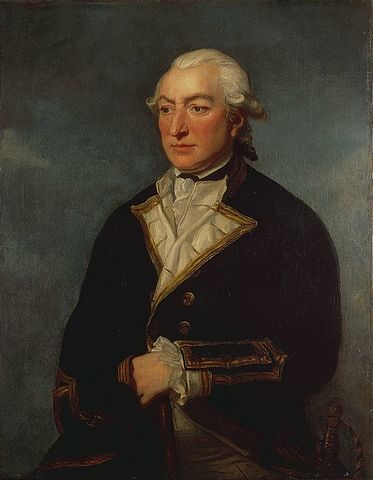 In early 1769 he went out to the West Indies as first lieutenant of the Dunkirk 60, Captain Walter Stirling, flying the broad pennant of Commodore Arthur Forrest, and he received a similar promise of promotion from the latter to that offered by Admiral Stevens. Unfortunately he was again thwarted by the early death of his patron, for although the temporary commander-in-chief, Captain Stirling, did give him the acting command of the Phoenix 44, Captain Robert Carkett promptly annulled it when he arrived to take command of the station.

Promotion to commander finally came from the Admiralty when Pearson was appointed to the Druid 10 at Jamaica on 29 October 1770, a vessel which he paid off in December of the following year. After joining the sloop Speedwell 8 operating out of the Downs in 1773 he was posted captain on 25 June during the King s Review of the fleet at Spithead, and he retained that command for a three year period.

In the spring of 1776 he recommissioned the Garland 20 which was employed in the escort of the Quebec trade, and he remained off the St. Lawrence for a further two years, being senior officer there during 1777, and enjoying several American privateer captures.

Returning to England, he was appointed to the Serapis 44 in March 1778, and on 23 September 1779, whilst escorting the Baltic trade with the hired ship Countess of Scarborough, he came upon a squadron commanded by the American rebel John Paul Jones. Having engaged Jones ship, the Bonhomme Richard, the Serapis pulverised her almost into submission before suffering the misfortune of a massive explosion on her gun-deck, which, considering the presence of two other enemy frigates, meant that Pearson could no longer defend his ship. After surrendering the Serapis and eventually being returned to Britain, he was acquitted of blame for her loss at his court martial on 10 March 1780. He subsequently received many awards and was knighted for his brave resistance to the superior force, prompting Jones to remark Should I have the good fortune to fall in with him again I ll make a lord of him.

After his court martial Pearson was promptly appointed to the Alarm 38 in the Channel, which he commanded until April of the following year. He afterwards commanded the Arethusa 38, launched on 10 April 1781, in which he was present in Rear-Admiral Richard Kempenfelt s glorious attack on a French convoy on 12 December. He subsequently captured the Hardi 12 on 14 January 1782, the Jeune-Olympe 16 on 17 February, and the Tartare a week later, and after sailing for Newfoundland in April he recaptured the sloop Thorn 20 from the Americans on 20 August. Upon returning to Portsmouth the Arethusa was paid off in January 1783.

In 1790 Pearson retired to a position at Greenwich Hospital where he succeeded Captain William Locker as lieutenant-governor in 1800. He died at the hospital in January 1806.

He married Margaret Harrison of Appleby and had four sons and two daughters including Vice-Admiral Richard Harrison Pearson.

Pearson was regarded as a brave and capable officer, being seen as obedient rather than ardent . Apparently he laboured under a form of bewilderment for some time following his loss to John Paul Jones.