Bourmaster was commissioned lieutenant on 19 October 1759, in which rank he was the principal agent of transports in North America during the early stages of the Revolutionary War. Commanding the well-armed transport Empress of Russia, he recaptured two transports from a couple of American privateers off Boston Lighthouse on 23 November 1775, being then required to extinguish a fire upon one of the vessels. Having received a letter of appreciation from General Sir William Howe he was promoted commander with seniority from 30 May 1776 following the army commander-in-chief s representation to his brother, Vice-Admiral Lord Howe. Whilst serving aboard the Fanny, Boumaster was still acting as the principal agent for transports throughout most of 1777 in North American waters, including in the Philadelphia campaign from 25 August.

On 9 September 1777 Bourmaster was posted captain, and in December he hoisted the flag of Rear-Admiral Sir John Lockhart-Ross aboard the Royal George 100 in the Channel. He fought with distinction at the Moonlight Battle off Cape St. Vincent on 16 January 1780, and participated in the Channel fleet campaign from June – December. He subsequently commanded the Royal George with Lockhart-Ross flag in Vice-Admiral George Darby s relief of Gibraltar on 12 April 1781, and in the Channel fleet campaign from June-November, relinquishing the command in the latter month. During April 1782 he briefly commanded the Victory 100 in the Channel, and from May to July he had the Ocean 90 on the same station, temporarily flying the flag once more of Rear-Admiral Sir John Lockhart Ross. 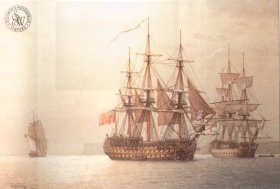 Bourmaster’s last command as a captain, and the first ship on which he raised his flag, was HMS Glory

From April 1786 Bourmaster commanded the guardship Elizabeth 74, being based at Portsmouth for the next two years. Towards the end of the Spanish Armament in late 1790 he joined the Barfleur 98 with the flag of Rear-Admiral Jonathon Faulknor, being based at Spithead until paid off in September 1791 following the end of the Russian Armament.

From August 1794 he commanded the Glory 98 in the Channel, and having been advanced to flag rank on 23 October he retained his flag on this vessel in the Channel for a short time with Captains Thomas Larcom and Alexander Graeme serving under him. He then briefly flew his flag aboard the Impregnable 98, Captain Andrew Mitchell.

His daughter Harriet married the future Rear-Admiral Sir Archibald Collingwood Dickson. His address was given as Titchfield, Hampshire.

A contemporary described Bourmaster as one of the best men that ever did honour to the navy .