1731-1803. He was born in Loddon, Norfolk, the younger son of Thomas Wallace and his wife Mary Beamish.

In 1746 Wallace was enrolled at the Royal Naval Academy at Portsmouth, and after serving in the Syren 24, Vigilant 64, and Intrepid 64 he passed his lieutenant s examination on 3 January 1753 and was commissioned and appointed to the Greenwich 50, Captain William Holburne, on 11 March 1755. This ship, later under the command of Captain Robert Roddam, was captured in the West Indies on 16 March 1757, and after being released Wallace joined the Rippon 60, Captain Edward Jekyll, in April 1758, serving at the reduction of Guadeloupe in April of the following year. In January 1760 he moved to the Neptune 90, Captain Broderick Hartwell, which became the flagship of Vice-Admiral Sir Charles Saunders in the Mediterranean.

On 3 November 1762 Wallace was promoted commander of the Alderney 10 seeing service in the North Sea, and having paid her off at Portsmouth in the following spring was immediately appointed to the recommissioned sloop Trial 10, going out to the Bahamas in the summer and commanding her through to 1766 on the North American coast. In July 1766 it was erroneously reported that he had been appointed to the Dolphin in order to undertake exploratory work in the southern seas, but in the event she sailed under the command of Captain Samuel Wallis. After a period of unemployment he recommissioned the Bonetta 10 in July 1767, sailing later that summer for Florida and retaining her until the beginning of 1771. 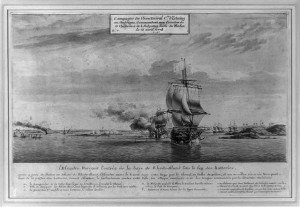 When the French fleet arrived off Rhode Island in 1778 Captain Wallace was forced to take HMS Experiment through the notorious Hell’s Gate to reach safety.

On 10 January 1771 he was posted captain, and joining the Rose 20 at Sheerness in November he went out to Newfoundland in each of the early summers of 1772-4, as was the custom for ships assigned to that station. With the revolt amongst the colonies gathering pace the Rose was sent to Boston with two companies of the 65th Regiment in October 1774. Here Wallace seized the rebel supplies and became busily engaged in attacks on the coastal settlements between Boston and Long Island where there were signs of rebellion.

In late 1774, with naval resources stretched by the determination to suppress the Boston rebellion, the Rose was sent to Newport, Rhode Island in order to clamp down on smuggling activities and prevent the re-supply of the rebels. Here Wallace found that Fort George had been cleared of artillery and stores, the whole being taken up to Providence, and he was informed that his continued berthing at the port was likely to be met with difficulty. Following the Battle of Lexington in April 1775 and the commencement of the war in earnest, Wallace’s role became one of ensuring the provisioning of the British forces and loyalists at Boston. On 18 July, frustrated by the continued obstructiveness of the Newport citizenry, he moved his small squadron otherwise consisting of the Swan 14, Commander James Ayscough, and Kingfisher 14, Captain George Montagu, up to the north-west part of the town and threatened, not for the first time, to destroy it by cannon fire and to land a force at the south end to set it alight. Twenty-four hours later he withdrew his force, however, matters escalated when the Rhode Island General Assembly prohibited the removal of livestock unless it was for the use of the inhabitants, and with his role becoming ever more crucial Wallace’s squadron was supplemented by the Glasgow 20, Captain Tyringham Howe, and the bomb Bolton 12, Lieutenant Thomas Graves. On 29 August, upon learning that some two hundred and fifty men were congregating at Stonington, Connecticut, in order to remove the livestock, he sailed to prevent them doing so, and there followed an exchange of fire with the townsfolk. Over the next few weeks the rebel colonists managed to extricate even more livestock to Wallace’s evident frustration, and so when the town of Bristol refused to supply him he bombarded it on 7 October. Gradually his squadron obtained an ascendancy over the coast, with his most successful action being at long range off Rhode Island in early 1776 when he sunk a 16-gun privateer and obliged her 20-gun compatriot to flee. His boats collected many survivors who were taken into the Navy.

Wallace served in the New York campaign from July – October 1776, where he exchanged with the invalided Captain Alexander Scott into the Experiment 50. He was present at the occupation of Rhode Island under the orders of Commodore Sir Peter Parker on 8 December 1776, returning home with despatches in January 1777 and being honoured with a knighthood on 13 February. In July he returned to North America, participating in the attack on two rebel forts sixty miles up the Hudson River that October, and forming part of Vice-Admiral Lord Howe s fleet at the defence of Sandy Hook and in the operations off Rhode Island against Admiral Comte d Estaing in August 1778. On 20 August the Experiment was stationed on detached duty off Newport when the French fleet arrived in force. In order to effect his escape Wallace took his command to the west, down Long Island Sound and through the Hell Gate to reach New York via the East River on the 25th, a feat never achieved before by such a large ship. A month later, together with his consort, the Unicorn 20, Captain John Ford, he chased the American privateer Raleigh 32 off Boston and forced her surrender on 28 September after she had chosen to drive ashore in the Penobscoit Islands. In December The Experiment was serving off Virginia when a violent gale blowing off the coast forced her to retire all the way to England.

Wallace subsequently joined up with Vice-Admiral Marriott Arbuthnot s fleet at St Helens, and on 13 May 1779 was detached to counter a French threat to Jersey, commanding the small squadron which drove the enemy all the way back to Cancale Bay near St Malo. Ignoring the pleas of his pilot not to venture too far inshore, he destroyed a gun battery and assisted in the capture of one frigate and destruction of three smaller vessels. Having rejoined Arbuthnot, who had been delayed by adverse winds at Torbay, he proceeded with the new commander-in-chief to New York, and whilst on this station took the privateer General Arnold 20. Unfortunately, on 24 September the Experiment, being already dismasted, was captured by the Z l 74, Fendant 74, and Sagittaire 50 from d Estaing s fleet whilst in the process of conveying money to the troops in Savannah. After being sent as a prisoner to France Wallace was exchanged in February 1780 and acquitted of any blame for the Experiment s loss at the subsequent court martial. Shortly afterwards, in March 1780, he was appointed to the Nonsuch 64.

Serving in the Channel, he captured the French corvette Hussard 18 off Ushant on 5 July 1780, and burned the grounded L g re 36 off the Loire on 15 July 1780. That night he also took the celebrated frigate Belle Poule 32, whose famous captain Chevalier de Kergariou Coatl s was mortally wounded in the action. During September he joined the Channel fleet campaign, which ran from June-December, and he was also with Vice-Admiral George Darby s fleet that relieved Gibraltar on 12 April 1781. During the return voyage home chased the Actif 74, actually getting to grips with her on 14 May, but being beaten off with the loss of twenty-six killed and sixty-four wounded. Unfortunately the rest of the British fleet failed to prevent the Frenchman fleeing to Brest, which circumstances were much to the detriment of Vice-Admiral Darby. The Nonsuch was subsequently with the Channel fleet from 10 September, the bulk of the fleet being at sea in the campaign from June-December 1781.

The Battle of the Saintes

After the Nonsuch was paid off Wallace commissioned the new Warrior 74 in the autumn of 1781, and he went out to the West Indies with Admiral Sir George Rodney at the start of the following year. He fought in the Battle of the Saintes on 12 April 1782, , losing five men killed and twenty-one wounded, and having received a great deal of punishment from the French three days earlier before being relieved by the British centre. During the battle itself he was thankful for the support of the Magnificent 74, Captain Robert Linzee. Wallace returned to England with Rodney in July, commanding the Resolution 74 in place of the late Captain Robert Manners, and with Captain John Symons having replaced him aboard the Warrior.

He remained unemployed until 1793 bar a short period in command of the new Swiftsure 74 which he commissioned in June 1790 during the Spanish Armament, prior to paying off in September 1791 at the end of the Russian Armament. His life was not without excitement though, for in June 1783 he brought to trial the Warrior s lieutenant of marines, Charles Bourne, who had falsely accused him of tyrannical and oppressive behaviour in a dispute which had led to Wallace being assaulted with a stick outside the Admiralty.

In January 1793 he was appointed to the Monarch 74, joining Rear-Admiral Alan Gardner s Leeward Islands campaign which sailed on 26 March, participating in the unsuccessful attack on Martinique, and returning home at the end of the year.

He was promoted rear-admiral on 12 April 1794 and appointed commander-in-chief at Newfoundland with his flag in Monarch 74, Captain John Cooke, and with Captain Frank Sotheron in the Romney 50 from June 1795 and May 1796, but with only a small force of frigates and lighter vessels to assist him. . On 28 August 1796 a French squadron of seven sail of the line and three frigates under Rear-Admiral Joseph de Richery arrived from Cadiz and Wallace was powerless to act as they destroyed the local fisheries, doing much as they pleased.

He returned to England in November and did not see any further service, but he did manage to make the newspapers when his carriage was stopped by two highwaymen on Hounslow Heath that month and he and the two lady occupants were robbed of a watch and money.

In due course Wallace became a vice-admiral on 1 June 1795 and an admiral on 1 January 1801. On 5 December that year he lost a case in the Court of Kings Bench over disputed prize money relating to events in 1795, the court finding in favour of the defendant, Admiral Sir Richard King

Wallace died in Gloucester Place, Portman Square, London on 6 March 1803. He was buried at Hanworth, Middlesex, having lived at Hanworth House for some twenty years.

My thanks to Peter Fay of Jamestown, Rhode Island for his input on Sir James Wallace’s service at Rhode Island.