1751-1808. Christened on 23 April 1751 at Stowe, Buckinghamshire, he was the third son of the renowned landscape architect Lancelot Capability Brown and his wife, Bridget Wayet. His elder brothers both predeceased him, the second as an infant.

Having been schooled at Eton John Brown joined the Navy and was commissioned lieutenant on 1 September 1772. During 1776 he held the command of the schooner Tryal in North American waters, serving in the New York campaign of July-October, but in the early part of 1777 he was obliged to set the Tryal on fire at Rhode Island in order to escape capture by Colonial forces. Brought to a court-martial under the orders of Commodore Sir Peter Parker, and with Captain Charles Fielding presiding, he was sentenced to be dismissed the service, whereupon he went to New York and requested that the commander-in-chief, Vice-Admiral Lord Howe, review the case. After two months aboard the flagship Eagle 64 he was exonerated and in March 1777 commissioned the galley Cornwallis, commanding her off New York and in the Philadelphia campaign of August-October.

He was promoted commander of the sloop Swift 14 in North American waters on 1 December 1777, retaining her into the following year, and was appointed to the storeship Leviathan 30 which he brought home to England in November before sailing for Jamaica. He was posted captain on 25 March 1779 and towards the end of the year exchanged with Captain Robert Lambert into the Niger 32 on the Jamaican station, falling in with Captain Hon. William Cornwallis s squadron which had a running engagement with a superior French force in the Windward Passage on 20-22 March 1780, although the French eventually shied away from an engagement, and later serving in Cornwallis s squadron that escaped from a superior French force on 20 June. The Niger subsequently returned home with a convoy and was paid off in October..

In January 1781 he commissioned the ex-French privateer Stanislaus as the Proselyte 32, serving in the North Sea, in which he took the Rohan Soubise 22 off Peterhead on 25 April, the Hirondelle on 7 August, and the Jeune Dunkerquoise on 3 April before being paid off in the early part of 1783. 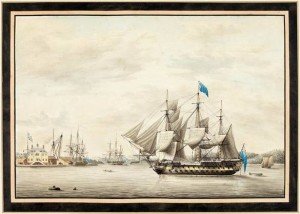 In July 1786 he recommissioned the Amphion 32, going out to Jamaica in October where following the untimely death of Captain Hon. John Whitmore Chetwynd he exchanged in early 1789 with the newly posted Captain Henry Nicholls into the Expedition 44. After going out on a cruise he brought her home to pay her off in the late summer.

He recommissioned the Asia 64 in May 1793 and commanded her in Vice-Admiral Sir John Jervis West India campaign of 1794, although unfortunately, due to the failings of a French pilot, the Asia did not play her intended part in the assault on Fort Royal, Martinique. He returned to England at the end of the year giving passage to his friend, Captain Sampson Edwards of the Terpsichore 32, who had contacted yellow fever, and he left the vessel shortly afterwards. In March 1795 it was reported that he had sailed in command of the Victorious 74 with Vice-Admiral Sir George Keith Elphinstone s expedition bound for the Cape, but he left that vessel in favour of Captain William Clarke before the force reached its destination.

He married Mary Linton at Stowe in 1783. In 1801 he inherited Fen Stanton Manor in Cambridgeshire, from his brother, Lancelot Brown MP, and the estate passed to his younger brother, Rev Thomas Brown on his death in 1808.

Brown was described as a fine practical seaman and of a scientific bent, experimenting regularly with his sail plan. Known to his family as Jack, he used typical robust naval language. In 1802 he was living at Stirtloe House, Buckden.