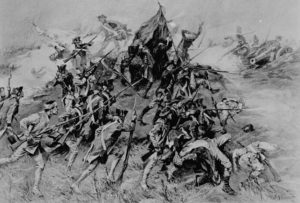 c1741-1779.He came from a family long settled in Godmanstone, Dorset, and was the father of Rear-Admiral Philip Browne. Two other sons died on active service, one being an artillery captain based at Barbados, and the other a midshipman in the navy.

Browne was commissioned lieutenant on 20 June 1765, and by 1776 was serving on the North American station aboard Vice-Admiral Lord Howe s flagship Eagle 64, Captain Henry Duncan. He was promoted commander on 4 March 1777, and had the Scorpion 14 with Vice-Admiral Lord Howe s fleet at New York, being posted captain on 16 December 1777 even though he continued with the Scorpion until December 1778.

Having next removed to the Rose 20, Browne remained on the North American station and provided excellent service at the Siege of Savannah during September-October 1779. Sadly he died in Georgia shortly afterwards of a fever brought on by the exertions of the campaign.