1760-98. Born on 10 March 1760, he was the third son of Humphrey Cole of Marizon in Cornwall, and of his wife Phillis Maugham, and was one of five brothers who served in the Navy or Army, either in combat or ecclesiastical roles. He was the elder brother of Captain Sir Christopher Cole and his other brothers included Rev. Samuel Cole, who became the chaplain of the Royal Hospital at Greenwich, and the Rev. John Cole, who was the domestic chaplain to the Duke of Clarence. Another brother, Humphrey, rose to the rank of major in the Army and died at Jamaica in 1796.

Francis Cole was commissioned lieutenant on 30 April 1779, and was promoted commander of the Trepassey 14 on 12 December 1782, which vessel he commanded in the West Indies and at Halifax from May 1783 until paid off at Deptford in the following March.

In August 1784 it was reported that he was to take command of the sloop Swan on the Jamaican station in place of Lieutenant Samuel Gambier, the son of the commander-in-chief, Vice-Admiral James Gambier, who was to be restored to his previous rank on the orders of the Admiralty, but it is not clear that Cole ever took up this commission as it was Captain Lauchlan Hunter who superseded the younger Gambier.

Cole joined the sloop Fortune 16 in July 1786 at Plymouth, sailing for the Irish station, and remaining with her until August 1789. During the Spanish Armament of 1790 he was posted captain on 21 September of the Diomede 44, which at the time was in the Ordinary at Sheerness, and which he never took to sea.

In April 1793 he recommissioned the Eurydice 24, and during July kept a watch on the French fleet’s movements off Brest, reporting these to Admiral Lord Howe on the 25th and then disembarking at Torbay on 9 August to journey overland for the Admiralty, which he reached with Howe’s despatches the next day. On 21 September the Eurydice arrived at Portsmouth in escort of the Guernsey convoy, and on 4 November she reached Deal in escort of two troop transports.

During May 1794 Cole set out from Plymouth for Jersey but immediately put back on learning that three French frigates were cruising between Guernsey and the Lizard. He was later able to cruise with Rear-Admiral John MacBride’s squadron before returning to Plymouth at the end of the month. On 8 June the Eurydice was off Guernsey under the orders of Captain Sir James Saumarez of the Crescent 36 when their small squadron brilliantly evaded a larger French force. Early in September she was at Portsmouth, and she then returned to Plymouth to undertake convoy duty at the beginning of October, although a storm soon forced her to seek sanctuary in the Devonshire port. Her somewhat tedious year continued when she arrived at Portsmouth from the Downs with a convoy on 18 October, and she then awaited a fair wind to escort the trade to Lisbon. On 8 November she came into Portsmouth once more with a convoy from Plymouth, and in February 1795 she entered Portsmouth with several victuallers.

Cole had a brief respite from the monotony of convoy duty when he commanded the Galatea 32 for Captain Richard Keats in the early part of 1795, in which frigate he enjoyed a cruise in the Channel with Commodore Sir John Borlase Warren before putting into Plymouth on 3 March. Resuming his position on the Eurydice, he entered Portsmouth at the beginning of April.

Later in April 1795 Cole was offered the crack eighteen-pounder frigate Révolutionnaire 38, a recent capture from the French by Captain Sir Edmund Nagle, which vessel became known as ‘the Irish Racehorse’ and was indeed a plum command. He was present at the Battle of Groix on 23 June, where he was praised by Admiral Lord Bridport for attacking the French sail of the line Formidable 80. After the battle the Révolutionnaire towed the recaptured Alexander 74 back to Plymouth to be received by a cheering throng, and at the same time brought in a number of American vessels that had been attempting to delivery flour and provisions to France. 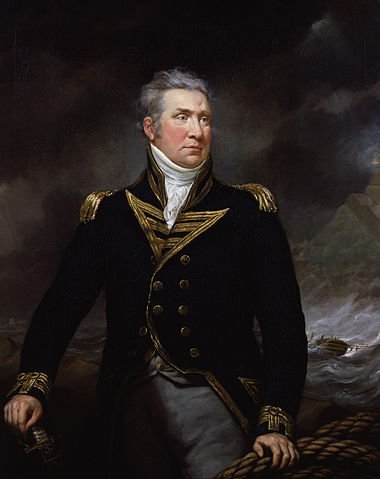 Captain Cole saw the greater part of his all to brief career as a frigate captain under the orders of his friend and fellow-Cornishman, Sir Edward Pellew.

On 10 August 1795 the Révolutionnaire arrived at Falmouth to join Captain Sir Edward Pellew’s raiding frigate squadron in the Channel, and on 12 April 1796 off Brest she fell in with the Unité 36, commanded by the esteemed Captain Durand Linois. In a sharp twenty-minute action, during which the majority of the raw French crew performed most inadequately, the Révolutionnaire prevailed, and on the approach of the Concorde 36, Captain Anthony Hunt, Linois struck his colours. The French frigate suffered twenty casualties, the British ship none. Continuing under the orders of Pellew, the Révolutionnaire was with the squadron when it took the Virginie 40 eight days later, with her share of the prize fund for the two captures being £3,862.

In November 1796 the Révolutionnaire came out of dock at Plymouth, and in December she was again with Pellew when the Brest fleet left port. Cole was sent by his senior officer to warn Vice-Admiral Sir John Colpoys of the French movements, although in the event he was unable to find that officer. On 24 January 1797 he came into Plymouth with despatches from Admiral Sir John Jervis, the commander-in-chief of the Mediterranean fleet at Lisbon.

At the time of the Spithead Mutiny in April 1797 the Révolutionnaire was sailing with a small squadron under Rear-Admiral Lord Hugh Seymour which was engaged in an ultimately unsuccessful search for a Spanish treasure convoy from Havana, and when this force reached Portsmouth from Plymouth with a convoy at the end of May Cole’s crew rebelled and demanded the removal of the first lieutenant. This ultimatum was refused by the admiral. The Révolutionnaire was then ordered around to the Nore to join a small force of frigates that was to escort the newly married Prince and Princess of Wurttemburg, the former Princess Royal, Charlotte, from Harwich to Cuxhaven, but their departure was delayed by the mutiny spreading to that station. At the height of the insurrection Cole landed at Southend and proceeded to deliver a set of articles from the Nore mutineers to the Admiralty. Following the end of the mutiny the Wurttemburg convoy was able to put to sea later that month. In August the Révolutionnaire returned to Falmouth with Pellew from a cruise, and on 20 October she came under fire from the batteries at Brest when going in to reconnoitre the strength of the French fleet.

Captain Cole died at the age of thirty-eight on 18 April 1798 at Plymouth. His funeral was held on 23 April at Marazion, Cornwall, and he was buried in nearby St. Hilary. At the appointed time of his funeral Sir Edward Pellew’s command, the Indefatigable 44, lay in the Carrick Roads, Falmouth firing minute guns.

Cole married Honor Keir from Marazion on 25 August 1784 at St. Hilary Church and the couple had one son and two daughters. His wife predeceased him by eighteen months at the age of thirty-four.