The Saumarez Retreat off Guernsey – 8 June 1794

On 7 June a small squadron commanded by Captain Sir James Saumarez of the Crescent 36, and otherwise consisting of the Druid 32, Captain Joseph Ellison, the Eurydice 24, Captain Francis Cole, and five luggers and cutters, departed Plymouth for the Channel Islands with instructions to reconnoitre the strength of French forces in Cancale Bay and St. Malo.

At dawn the next day the squadron was some thirty miles north north-west of Guernsey when five French men-of-war were discovered to windward. These were the Scévola 54 and Brutus 54, both of which had been razeed from 74-gun sail of the line, the Danaé 36, Félicité 36, and a twelve-gun brig believed to be the Terreur. Upon sighting the British squadron the French formed line of battle on the fresh north-easterly breeze and edged down upon their enemy. 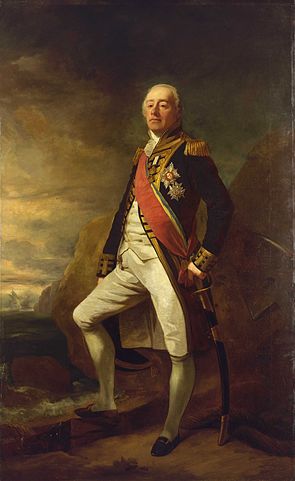 To outrun the superior French force was impossible, so Saumarez decided to draw them toward the waters of his home island of Guernsey where he hoped he would be able to outwit them with his local knowledge. Deliberately shortening sail to allow the dull-sailing Eurydice to escape towards the island, and dispatching the five smaller craft back to Plymouth, the Crescent and the Dryad jockeyed with the French until at about 8 a.m. Saumarez was confident that Captain Cole’s vessel was out of harm’s way, whereupon the two frigates raced for the Hanois reef off the south-west coast of Guernsey. Even so, the leading French vessel continued to gain on the Crescent and Dryad, and in doing so came close enough to the land for the batteries to open fire on her. For the many spectators and the island’s garrison who were thronged on the shoreline, the British vessels’ predicament appeared to be heading towards an inevitable conclusion.

But Saumarez had other ideas, and separating from the Dryad, he hauled his wind to the north and ran along the length of the French line so as to present the Crescent as an easy capture, before charging for a rock-strewn passage that no King’s ship had ever been known to navigate. The responsibility of conning the frigate lay with his pilot, an experienced St. Saviour’s fisherman by the name of Jean Breton, whom Saumarez and providentially bumped into at Plymouth, and to whom he had offered a passage back to his home island. When Saumarez asked him whether he was sure of his bearings the Channel Islander, pointing ashore to the parish of Catel, declared confidently:

‘Yes Sir, for there is your house and there is my own!’

In superb style the Crescent shot through her perilous passage and rounded the northern coast of the island to enter the Guernsey Roads leaving the impotent Frenchmen on the other side of the rocks. Meanwhile the Eurydice and Druid had taken a southerly passage into the safety of the Guernsey Roads

Once the news of the encounter between the two squadrons reached the Press it was initially reported that an action had been forced by the inferior British squadron, and that only the French superiority had prevented the heroic Saumarez from celebrating a victory before the enemy had sheered off. A more honest appraisal of the action came in a letter from the island which was posted the next day, and which authentically heralded Saumarez’ bravery and skill in escaping from the French. For his part in the preservation of all three ships, but specifically the vulnerable Eurydice, Jean Breton was presented with a silver gilt medal by the lieutenant-governor of Guernsey, Major-General John Small.

An amusing postscript to the affair occurred on 14 September when Saumarez and four frigates under his command appeared off Weymouth whilst the King and members of his family were taking their regular holiday in the town. When the strangers failed to answer the signals of the guardship Trusty 50, Captain William O’Brien Drury, a panic broke out amongst the royal flunkies. Suspecting a French plot to kidnap the king, the coaches for London were made ready and the royal baggage packed, but by evening Saumarez’ ships had been identified and a relieved monarch was able to resume his holiday.

Far less happily, when Saumarez was briefly holding the position of commander-in-chief at Guernsey as a vice-admiral thirteen years later, he was a witness to the wrecking of the post ship Boreas 22, Captain Robert Scott, on the Hanois reef on 28 November 1807, a tragedy that saw the loss of one hundred and twenty men including the commander, and the survival of a mere three dozen.