The Spanish Armament – May to November 1790

During the course of his last voyage of discovery into the Pacific Ocean the late Captain James Cook had visited what was later to be known as Vancouver Island in 1778, and had found a deep water anchorage on the western coast which he had named Nookta Sound, an anglicised version of its native name. He had not claimed possession of the surrounding area, but as it was believed that no other European power had ever entered the sound a British right to it was assumed, and when news of its discovery reached civilisation adventurous entrepreneurs began to formulate plans for the use of the sound as a base to develop a fur trade.

During 1788 two ships under British ownership but flying the Portuguese flag arrived in the sound, and with the complicity of the local natives the traders began to accumulate furs before departing at the end of the summer to sell their wares in the lucrative Chinese market. Such were their immediate rewards that it was decided to return to Nookta Sound in greater numbers during the following year, and a naval officer by the name of Lieutenant James Colnett, who with Admiralty permission had spent the previous few years harvesting sea otter pelt off the Pacific Coast of North America, was placed in command of an expedition that would establish a permanent base in the sound. 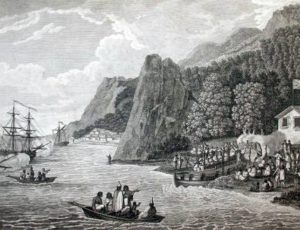 The British were not the only nationality with an interest in developing Nookta Sound however, and on 5 May 1789 two ships commanded by Captain Don Est ban Jos Martinez under the orders of the Governor of Mexico arrived to take possession of the sound in the name of the King of Spain. The governor s claim to sovereignty was that Juan Josef Perez Hernandez had actually discovered the anchorage four years prior to Cook, and that the 1494 Treaty of Tordesillas had accorded Spain sole rights to the western seaboard of America, which rights they held to be sacrosanct.

Upon arriving in Nookta Sound Martinez discovered two American vessels and a British trader which he immediately sent packing. When another British vessel came in a month later Martinez scandalously seized it for Spanish use, and in early July he took a further belligerent step by arresting Lieutenant Colnett and his men when their ship entered the sound. To make matters worse he then co-opted the Chinese workers that the British had brought in to build his own trading post. A further British vessel was seized on 12 July, and her crew together with Mr Colnett and all the other detained British seamen were sent under escort to San Blas in Mexico. The existing American vessels were left alone, but one arrival from the new state was arrested and another was chased away. Come the onset of winter in October the Spanish retreated to Mexico, and here they made plans to despatch a larger force north in 1790 to ensure that Nookta Sound remained under their control.

In April 1790 a firsthand account of Martinez aggression reached Europe when one of the chief fur traders, John Mears, arrived in England aboard the East-Indiaman Middlesex and presented a memorial to the government. With inflamed reports declaring that Colnett and his men had been carried away in irons to Mexico the dispute soon escalated, and on 30 April the British government responded to the Spanish insistence on exclusivity with a demand of their own that free trade should be allowed in the Nookta Sound area. To back up this demand an instruction for the fleet to mobilise was given in early May, and whilst despatches flowed to the various ports ordering the commissioners to begin fitting out the men-of-war, press gangs began raiding ships in the Thames to strip them bare of all crews. Soon war with Spain and France, her ally through the Bourbon royal family connection, seemed inevitable, and an anxious Spanish ambassador sent notice that all Spanish ships in British waters should begin preparations for departure. In France King Louis XVI, who was already struggling to contain the embryonic French Revolution, instructed that his fleet of forty ships of the line should be prepared for duty, and in the Mediterranean the sloop Bulldog 16, Commander Thomas Peyton, was sent to collect forty British vessels from the increasingly hostile port of Barcelona and escort them to Gibraltar.

Back in Britain unemployed officers, many of whom could envisage capturing lucrative Spanish treasure ships sailing to Europe from South America, rushed to the Admiralty to seek a command for the forthcoming campaign. One successful applicant was the Duke of Clarence, who on 13 May arrived at Plymouth, where Vice-Admiral Thomas Graves was supervising the fitting-out of ships, to assume command of the Valiant 74. At St. James Palace in London the Duke s father, King George III, kissed hands with Admiral Earl Richard Howe and Admiral Hon. Samuel Barrington on their appointment to take command of a Grand Fleet with orders to cruise in the Channel.

With a response from the Spanish Court in Madrid still awaited, Barrington left London for Portsmouth on the last day of May to take command of those ships that were ready to sail. Despite a lack of men Barrington, who was ably assisted by his captain of the fleet, the incomparable Rear-Admiral Sir John Jervis, soon assembled twenty-one sail of the line and twenty-two frigates, and at the end of June the fleet proceeded to Torbay where Lord Howe, flying the flag of the admiral of the fleet, took command.

Meanwhile in the Mediterranean the British commander-in-chief, Rear-Admiral Joseph Peyton, had despatched the Ferret 14, Commander Hon. Robert Stopford, to watch the movements of the Spanish fleet at Cadiz. On 5 July definite news of the Spanish fleet s whereabouts reached Britain when Stopford arrived at Falmouth to report that upon reconnoitring Cadiz on 20 June he had identified thirty-five men-of-war with pennants flying, of which eighteen were sail of the line. In hastening to England he had left the Bulldog and Zebra 16, Commander Hon. Robert Forbes, cruising off Cadiz to keep watch on the Spanish.

After returning to London and a conference with the King at St. James Palace Lord Howe set off for Portsmouth in mid-July to rejoin his flagship, the Queen Charlotte 100, in order to proceed to Torbay with six other sail of the line and reassume command of the fleet. By now Rear-Admiral Hon. John Leveson-Gower had become the captain of the fleet and Rear-Admiral Jervis had removed to the Carnatic 74, prior to hoisting his flag aboard the Barfleur 98. After remaining wind-bound at Spithead for several days Howe eventually departed for Torbay on 10 August, but further poor weather delayed his arrival off Devon until the morning of the 14th.

On the same day that Howe reached Torbay reports were received that the Spanish fleet of thirty-three sail of the line, together with a whole host of frigates, had put out of Cadiz and been seen off Cape St. Vincent by the Zebra. Meanwhile at Brest Vice-Admiral Fran ois Charles Hector d Albert de Rions had arrived to take command of the fourteen French ships of the line that had so far been commissioned by the National Assembly, although with a sign of the troubles to come he found the majority of these in an advanced state of mutiny.

Before thousands of spectators lining the shore, and under a fresh breeze in the west-north-west, Howe set sail from Torbay on 17th August with thirty-one sail of the line, nine frigates and some twenty other smaller vessels to patrol the Channel. In doing so he had to overcome the misgivings of almost a dozen of his captains whose ships were vastly undermanned. By 6 p.m. the fleet had doubled Start Point, and with the wind veering to the north it made a most impressive sight as it ploughed down the Channel with all sail set. Thereafter, throughout the rest of August and into early September, Howe cruised uneventfully between the Lizard and Ushant, although early in the latter month Vice-Admiral Lord Hood was recalled to the Downs to collect a squadron for the Baltic.

Yet to the dismay of those naval officers seeking honour and glory, war had still not been declared, and on 13 September half of the Channel fleet retired to Portsmouth, the other half to Plymouth, and Lord Hood s orders for the Baltic were revoked. The Navy still remained on its guard, and whilst the Melampus 36, Captain Charles Morice Pole, and Lizard 28, Captain John Hutt, were sent to reconnoitre Ferrol and Corunna respectively, Lord Howe issued orders that the fleet should be prepared to set sail at any time, although thankfully for the common seamen he consented to allow any women on board to remain until the signal for sailing was made. Admiralty concerns over the safety of the West India trade also saw Rear Admiral Samuel Cornish fit out six sail of the line for the Leeward Islands, and these set sail in October.

In the event the Spanish fleet possessed no other threat than of that to the trade in the Mediterranean, the French fleet did not put to sea, and before the end of October delicate negotiations between Britain and Spain had produced a settlement. The King of France had far more important matters to deal with than his ally’s trading rights, and in the face of British resolve the unsupported Spaniards backed down. The Nookta Sound Convention, signed on 28 October, gave Britain full access to the anchorage and surrounding area, and resulted in Spain dropping all her claims and recompensing the British traders she had mistreated.

The only compensation for the navy resulting from the crisis was that it had been able to bring many ships of the line out of mothballs at short notice, and had given the hordes of unemployed officers a refresher course in commanding their ships, many of whom were rewarded by being promoted at the end of the dispute.

Other ships in commission, or commissioning, at the end of August: