1742-1827. Vashon was born at Ludlow on 9 August 1742, the youngest son of the Reverend James Volant Vashon, who was the vicar of Eye in Herefordshire. He was the uncle of Rear-Admiral Volant Vashon Ballard.

In August 1755 Vashon joined the Revenge 64, which was commanded by a local Shropshire landowner, Captain Frederick Cornwall, and he served at the indecisive and controversial Battle of Minorca on 20 May 1756 that resulted in Vice-Admiral Hon. John Byng s execution. He later transferred to the Lancaster 66, Captain Hon. George Edgcumbe, serving at the reduction of Louisbourg in July 1758, and afterwards moving to the Leeward Islands station where he was present at the reduction of Guadeloupe. There he joined the Cambridge 80, Captain Thomas Burnet, flying the broad pennant of Commodore John Moore, and continuing on the Jamaican station he was seconded to the frigate Boreas 28, Captain Samuel Uvedale, which enjoyed great success against enemy shipping. Disappointment came in the summer of 1761 however, when after returning to the Cambridge a request from Captain William Goostrey to promote Vashon was rejected by the commander-in-chief, Rear-Admiral Charles Holmes, on the basis that he appeared to be a mere boy who was not yet ready for advancement. 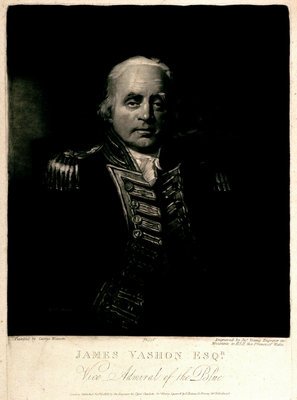 Vashon saw further service aboard the Quebec 32, Captain John Leveson-Gower, before that frigate was paid off in June 1763. Although he passed his lieutenant s examination on 7 September 1763 he was obliged to wait a further eleven years before being commissioned, and it little helped that both Goostrey and Holmes had died in the interim. He spent several years of the peace serving at Newfoundland aboard the Guernsey 50, Commodore Hugh Palliser, who commanded that station from 1764-6, and thereafter in the Leeward Islands with Vice-Admiral Thomas Pye s flagship Chatham 50, Captain Charles Buckner. His eventual commission dated 1 June 1774 was at the order of Vice-Admiral George Brydges Rodney, the commander-in-chief of the Jamaican station, Vashon having been appointed in an acting-capacity to the frigate Maidstone 28, Captain Alan Gardner.

The Maidstone returned to England in April 1777 but shortly afterwards was sent out to North America where in March 1778 Vashon commanded her boats in destroying a ship which had gone ashore under enemy field artillery. In July he was despatched by Gardner to warn Vice-Admiral Lord Howe at New York of the arrival of the French Toulon fleet off the Virginia Capes. After returning to the Maidstone he assisted at the capture of the Lyon 40 on 4 November, and upon being appointed her prize master he endured a difficult passage to Antigua, commanding just twenty-four men against two hundred French, and being forced to keep the prisoners working on the pumps to ensure that the damaged ship did not founder in appalling weather. In achieving her safe delivery he was promoted to the rank of commander on 5 August 1779.

Vashon returned to England before going back to the Leeward Islands with despatches for Rear-Admiral Hyde Parker during the early part of 1780 in command of the newly commissioned Alert 14. On the voyage out he was chased both by a privateer and the French fleet but managed to outrun each. The Alert was sent back to England with despatches from Jamaica in 1781 by Vice-Admiral Sir Peter Parker, which was much against Vashon s wishes in view of the favouritism he was shown by the commander-in-chief of the Leeward Islands, Admiral Sir George Rodney. He afterwards served under Vice-Admiral Sir Hyde Parker in the North Sea, although he left the fleet just before the Battle of the Doggersbank.

After going out to the Leeward Islands with Rodney in early 1782 the Alert was located as a lookout off Martinique, and a month before the Battle of the Saintes Vashon was sent under a flag of truce to the Comte de Grasse on that island, being received with kind hospitality by the French admiral. During the battle on 12 April Vashon s officers took possession of the Glorieux 74 and assisted in the rescue of men from the Caesar after she blew up. On the 14th Vashon was posted captain of the Prince William 64, his commission being backdated to 12 April.

He became flag-captain to Rodney aboard the Formidable 90 when the fleet reached Jamaica, transferring thereafter to the Sibyl 28 when the commander-in-chief was replaced by Admiral Hugh Pigot. In March 1783, whilst in a detached squadron in search of an American ship of great worth, he was brought to action by the larger American frigate Alliance 36, although the latter unaccountably broke off the action. The Sibyl was paid off in July after returning to England.

From the beginning of 1786 Vashon served as flag-captain to Commodore Alan Gardner at Jamaica aboard the Expedition 44, sailing thither in May and transferring with Gardner to the Europa 50 in September. During the Spanish Armament of 1790 he recommissioned the Ardent 64 in June, serving in the West Indies under Rear-Admiral Samuel Cornish and retaining her through the Russian Armament of 1791 until she was paid off in September.

In January 1793 he was appointed to the St Albans 64, conveying the trade out to the Mediterranean where he served at the occupation of Toulon from 27 August. He escorted the trade to Jamaica in the spring of 1794 but whilst waiting to return from the West Indies he lost seventy men through yellow fever. On the way home the St. Albans managed to evade capture by a French fleet. In August 1795 he joined the Pompe 74, which ship had just been commissioned after being presented to the navy by French Royalists at Toulon two years earlier, and serving in the Channel he was present when the fleet mutiny broke out at Spithead on 16 April 1797. A further insurrection in which his first lieutenant Francis Beauman was almost lynched resulted in the sentencing to death of the chief mutineers and Vashon s application to be removed from the ship. 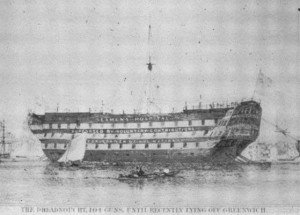 Vashon was the first captain of HMS Dreadnought – here she is in her latter years, still an imposing sight.

In March 1799 he was appointed to the Neptune 98 in place of the promoted Captain Sir Erasmus Gower, serving in the Channel. Following the Brest fleet s breakout on 25 April he joined Rear-Admiral Sir Charles Cotton s reinforcements to the Mediterranean, and he remained with the Neptune on that station until March 1801 when he retired ashore for six weeks for the benefit of his health. He was afterwards appointed to the brand new Dreadnought 98 in June 1801, serving initially in the Channel and later off Cadiz and in the Mediterranean until the summer of 1802.

On the resumption of hostilities in 1803 Vashon commanded the Princess Royal 98, taking the trade out to St. Helena and returning in the latter half of the year where his command was based off the mouth of the Solent to guard against any French invasion. Following his elevation to the rank of rear-admiral on 23 April 1804 he briefly flew his flag aboard the Glatton 56, Captain James Colnett.

On Admiral Lord St. Vincent s recommendation he spent the next four years as commander-in-chief at Leith with his flag initially aboard the Roebuck 44, Captain George M Kinley, and thereafter the Texel 64, Captains Christopher Laroche from August to November 1804, Donald Campbell, and by 1807 James Giles Vashon, with whom he moved to the Ardent 64 in 1808. During 1807 he turned down Admiral Lord Gardner s offer to serve as the captain of the Channel fleet, and he also sent artificers to repair the Danish fleet following occupation of Copenhagen on 7 September.

Vashon became a vice-admiral on 28 April 1808, left his Scottish post later in the year, and was created an admiral on 4 June 1814.

He died at his Ludlow residence on 20 October 1827, being buried in St. Laurence s Church in that town.

He married Jane Bethell in 1779 and had one son, James Volant Vashon, who took holy orders. After his first wife s death in 1786 he married Sarah, the previously unmarried sister of Admiral Peter Rainier of Sandwich, on 10 June 1791.

Vashon was known by the nickname Jemmy . Lord Gardner took a great interest in furthering his career and he was also on good terms with Admiral Rodney. He was esteemed for his understanding of scientific subjects, but was known as an odd and, on occasion, a very bad tempered man.