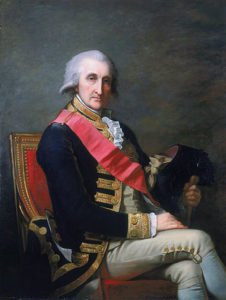 Lord Rodney, whose nepotism ensured a ridiculously early promotion for his son.

Rodney joined the Royal Academy at Portsmouth on 18 May 1778 but was discharged on 28 October of the following year and taken aboard his father’s flagship, the Sandwich 90, Captain Walter Young, as a midshipman. He commanded a gun at the Moonlight Battle off Cape St. Vincent on 16 January 1780, and subsequently went out to the Leeward Islands with his father’s fleet. He was commissioned lieutenant on 10 September, although during the year he served away from the flagship in a frigate to learn his trade.

On 14 October 1780, whilst still aged only fifteen, and with the fleet having sailed to New York, he was promoted commander of the recently captured Virginia privateer Pocahontas 14 by his father, and on the same day was posted to the Sandy Hook-based guardship Fowey 24, these ludicrous promotions being eventually confirmed on 22 May 1782. He was appointed to the frigate Boreas 28 on 14 November 1780, and he continued with his father’s Leeward Islands fleet which left New York two days later.

In April 1781 Rodney joined the Sibyl 28, and he was present at the Battle of Chesapeake Bay on 5 September prior to returning to the Leeward Islands with Rear-Admiral Hood’s squadron. He fought at the Battle of St. Kitts on 26 January 1782, although he missed the Battle of the Saintes in April as his command was refitting at Barbados. Shortly afterwards he transferred to the Anson 64 to replace the late Captain William Blair who had lost his life in the battle, in which ship he returned to England to be paid off that summer.

With his father being on friendly terms with the Prince of Wales, Rodney served as the M.P. for Launceston from 1790-6 in that gentleman’s interest, although he rarely appeared in Parliament. He was also an equerry to the Duke of Clarence from 1789-1814, but apart from recommissioning the Quebec 32 towards the end of 1790 during the Spanish Armament, which vessel he left in the following year, he remained unemployed throughout the peace.

In the spring of 1793, following the outbreak of the French Revolutionary War, Rodney recommissioned the America 64 for the Channel fleet, taking a convoy from Lisbon back to England in September of the following year. On 12 February 1795 he was appointed to commission the Vengeance 74, but he badly broke his leg in a carriage accident prior to sailing with the result that it was amputated in August and he was invalided out of active service, being replaced in his command by George Burlton.

In June 1796 he became the Commissioner of the Victualling Authority, and having been passed over for promotion to rear-admiral in February 1799 he remained in this civil post until November 1803. He then became secretary to the government of Ceylon, which post he held for many years before retiring in 1834.

Rodney died at Boulogne-Sur-Mer, France, as a captain on the retired list on 9 April 1847.

On 4 July 1784 he married Lady Catherine Nugent, daughter of the 6th Earl of Westmeath, by whom he had three daughters and two sons who predeceased him. After her death on 26 February 1794, he married Lady Louisa Martha Stratford, the eldest daughter of the 3rd Earl of Aldborough, on 19 October 1799, by whom he had two sons and six daughters. Following her death on 2 December 1814 he then married Antoinette Reyne of Vancouver on 7 June 1815, having issue a son and a further five daughters. One son from his second marriage, Thomas Maitland Rodney, born on 14 October 1810, entered the Navy in 1824 and was promoted commander in 1846, whilst the son of his third marriage, George Brydges Rodney, entered the Royal Marines.

A tall man, he was nearly six feet in height as a youth. He was described in his younger days as being volatile in spirit and somewhat vain. Various sources have suggested that after being appointed to the Vengeance he was court-martialled and dismissed from the navy, however this is unlikely and a confusion may have arisen because a seaman from the Vengeance, also called John Rodney, was court-martialled in 1794.