Vice-Admiral Marriot Arbuthnot, the commander-in-chief of the British Navy in North America, was not the easiest of officers to work with, as General Sir Henry Clinton, his equivalent in the Army, could testify. Having collaborated tolerably well on the reduction of Charleston in the spring, the two had subsequently fallen out over the admiral’s refusal to countenance an amphibious assault on Rhode Island due to his shortage of capital ships. It had not been the first time that the two men had failed to reach an accord, but at least Clinton and the admiral had only disagreed on military matters. For the awkward Arbuthnot a far more personal dispute with a man of his own ilk was approaching, and the disagreement would bring a temporary curtailment to the navy’s war effort in North America.

The dispute began on 14 September with the totally unexpected arrival at New York of a senior officer. Admiral Sir George Brydges Rodney, the commander-in-chief of the Leeward Islands station, had come north with eleven sail of the line on learning that a French squadron had occupied Rhode Island in July. Rodney had initially assumed the latter force to be his erstwhile enemy from the West Indies, Vice-Admiral Louis-Urbain de Bouënic, the Comte de Guichen, whose fleet of nineteen sail of the line, he knew, had departed the Caribbean. In fact, the force that had occupied Rhode Island was a smaller squadron of seven sail of the line under the command of Charles Louis d’Arsac, the Chevalier de Ternay, which was escorting Lieutenant-General Jean Baptiste Donatien de Vimeur Rochambeau’s army of six thousand men, and which had avoided an encounter with Commodore Hon. William Cornwallis off Bermuda on 20 June. 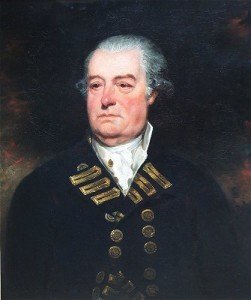 When General Clinton had first negotiated with Arbuthnot over an attack on Rhode Island, the admiral’s reluctance had been based on the fact that at the time he had only possessed four sail of the line under his command. Although Arbuthnot had then written to Rodney and sought reinforcements from the Leeward Islands fleet, what he had not expected was that Rodney himself would come north. The senior admiral’s surprise appearance, and his immediate instruction that Arbuthnot place himself under his command was, to Arbuthnot, an usurpation of his rightful authority and of his commission from the Admiralty. More personally, it was a threat to the financially lucrative system of prize-gathering and petty peculations that he had carefully constructed in his fiefdom. Consequently, he refused to join Rodney at his anchorage off Sandy Hook, and he remained in Gardiner’s Bay at the end of Long Island, where he had stationed his fleet that had been supplemented by the arrival of Rear-Admiral Thomas Graves with six sail of the line on 13 July, to keep watch on de Ternay at Rhode Island.

Rodney’s unilateral decision to enter another station was unprecedented, if understandable; after all it was the hurricane season in the West Indies, and events there would prove that the British fleet was far better off in safer waters. Furthermore, he had made adequate provision for the defence of the West Indies by despatching ten sail of the line to Vice-Admiral Sir Peter Parker at Jamaica. In coming north Rodney had always intended to reclaim Rhode Island from the French, a base which in his opinion housed the best harbour in North America. Only upon arrival did he see the correspondence between Arbuthnot and Clinton which indicated that the French fortifications on Rhode Island had been extended to such an extent that, even after Graves’ arrival, and now his own, an attack upon them was deemed inadvisable.

Although Rodney would claim that he initially attempted to behave with moderation towards Arbuthnot it was palpably not in his nature to do so, and when the latter displayed an utter insubordination Rodney deceitfully strove to portray himself as the injured party, and he embellished the dispute in his correspondence with the Admiralty. The boorish Arbuthnot had neither Rodney’s sophistication nor his cunning with which to press his own case, and a response from Lord Sandwich, the first lord of the Admiralty, to his indignant damnation of Rodney’s antics basically advised him to knuckle down and accept the situation.

Even so, for the next two months the fellow admirals bickered between themselves and with the Admiralty at the expense of the war effort. Rodney despatched the 74’s Centaur, Culloden, Russell and Shrewsbury to Gardiner’s Bay to reinforce Arbuthnot, but whilst smoothly claiming that he only offered ‘suggestions’, not orders, to his fellow admiral he did not hesitate to alter Arbuthnot’s fleet dispositions. Arbuthnot’s frigates were reassigned to patrol a coastline which an astounded Rodney considered had been left exposed to the ravages of the American privateers. The senior admiral castigated Arbuthnot for sending the Raisonnable 64, home without his knowledge, claiming that the detachment was ‘unprecedented in the Annals of the British Navy’. When the America and Prudent were sent out on a cruise Rodney criticised Arbuthnot for the weakening of a squadron that was supposed to be on stand-by to tackle de Ternay.

Matters came to an unedifying head when one of Arbuthnot’s frigates captured a lucrative prize. Rodney, who was as disreputably greedy as Arbuthnot, claimed an eighth of the prize’s value, leaving the second eighth to be shared between Arbuthnot and his junior admiral, Graves. If that was not enough, Rodney also promoted his own followers to positions which became vacant on the station, not least his fifteen-year-old son, Hon. John Rodney, who was outrageously both promoted commander and posted captain on 14 October. He seconded men, stores and even ships from Arbuthnot, and to top it all when his physician, Gilbert Blaine, found that Arbuthnot was claiming money intended for the sick, Rodney took great care to ensure that anyone and everyone became aware of the fact.

Not until Rodney departed for the Leeward Islands on 16 November with nine sail of the line, two frigates, and a goodly portion of Arbuthnot’s stores, did the nonsense end, thereby allowing the naval war in North America between Britain and her enemies to recommence. The one small consolation from the desperate affair was that Rodney’s appearance at New York had disadvantaged General George Washington, who had earnestly sought the arrival on that seaboard of the Comte de Guichen to assist in the advancement of his own campaign.

It was perhaps significant that although Lord Sandwich at the Admiralty had stood by Rodney, he advised him not to involve himself again in North American affairs. Thus, when following the end of the Leeward Islands campaign in August 1781 Rodney returned to England he left his second-in-command, Rear-Admiral Sir Samuel Hood, to sail north, and this officer ensured that he subordinated the Leeward Islands fleet to Rear-Admiral Graves, the new commander-in-chief in North America. By that time the elderly and ineffective Arbuthnot had returned to England on the grounds of ill health.

*These sail of the line did not return to the Leeward Islands with Admiral Rodney.

Arbuthnot s sail of the line: