On 20 June 1761 Thornbrough entered the navy as a cabin servant to his father, the first lieutenant of the Arrogant 74, Captain John Amherst, and he remained in this position for two years of service in the Mediterranean. He then returned to school for five years, during which time he was included on the books of the guardship Firm 60. Returning to active duty, he served at Plymouth aboard the Téméraire 74, Captain Edward Le Cras, and in December 1770 joined the Albion 74, Captain Hon. Samuel Barrington, based at Spithead. From April 1771 he served aboard the Captain 70, Captain Thomas Symonds, the flagship on the North American station to Rear-Admiral John Montagu, in which vessel his father was second-lieutenant, and on 16 April 1773 Montagu commissioned him lieutenant of the sloop Cruiser, Captain Tyringham Howe. He rejoined the Captain on 4 September, and she returned to England to be paid off in August 1774. . 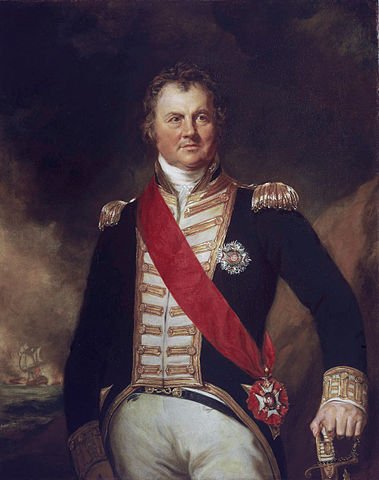 In October 1774 Thornbrough joined the North America-bound sloop Falcon 14, Captain John Linzee, and he was aboard her when she covered the attack on Bunker Hill by British troops on 17 June 1775. On 8 August he was wounded in the leg during an attempt to cut out a schooner from Gloucester, Cape Ann, and he was obliged to return to England. By March of the following year, he was fit enough to join the frigate Richmond 32, Captain John Lewis Gidoin, going out once more to the North American station. In September 1779 he was appointed to the Garland 28, Captain John Stanhope, which sailed for Newfoundland with a convoy and returned with another, and in April 1780 he was appointed first lieutenant of the newly commissioned Flora 36, Captain William Peere Williams-Freeman, whose boarders he led at her capture of the Nymphe 36 off Ushant on 10 August.

He was duly rewarded by being promoted commander on 14 September, and he was appointed to the small hired-ship Britannia 20 in which he conveyed the North Sea trade and then a Hessian troopship to New York in May 1781. Here he was posted to the frigate Blonde 32 by Rear-Admiral Thomas Graves on 24 September.

Remaining on the North American station, Thornbrough defeated seven privateers with a combined total of 128 guns on 8 May 1782, although he was only able to obtain the surrender of the largest of 24 guns. Nevertheless, he would earn a great deal of credit from the Americans for his humane treatment of the prisoners taken on this occasion. On her return voyage to Halifax the Blonde was wrecked two days later off the Seal Islands in the Bay of Fundy when towing her prize, although the latter then managed to make the best of her way to Halifax. After reaching an uninhabited islet Thornbrough’s crew suffered a couple of days of bitter hardship before they were rescued by two American privateers. As Thornbrough had earlier shown a kindness to his prisoners he and his men were chivalrously treated in return, and part of his crew were landed at on the British territory of Nova Scotia, whilst the rest, including Thornbrough, took passage in shallops for Halifax. These vessels were met in turn by the brig Observer 14, Lieutenant John Crymes, which had been sent out to look for the Blonde’s crew, and Thornbrough served as a volunteer in this vessel’s subsequent defeat of a 16 gun privateer, the Jack, off Sambro Lighthouse at the entrance to Halifax Harbour on 29 May. Later, he was acquitted for the loss of the Blonde at his court-martial at Halifax.

After returning to England Thornbrough was appointed to the Egmont 74 on 17 January 1783, although her intended posting to the East Indies was cancelled because of the impending peace, and she was paid off in April after a brief spell in the Channel.

On 8 October 1783 Thornbrough was given command of the crack frigate Hebe 38, serving in home waters and enjoying huge success in the prevention of smuggling whilst also undertaking some survey work. From June to September 1785, he cruised around the British Isles with the broad pennant of Commodore Hon. John Leveson-Gower, having Prince William aboard as a newly-commissioned lieutenant, He later served in Rear-Admiral Hon. John Leveson-Gower’s squadron of observation during 1788, and was present at the Kings Naval Review at Plymouth on 18 August 1789 prior to being paid off on 21 October. He then resumed employment during the Spanish Armament in July 1790 aboard the Scipio 64, and after again being paid off in December he had to wait until 21 December 1792 for further employment, joining the Latona 38 in time for the commencement of the French Revolutionary War.

For the next year Thornbrough served in the Channel, capturing the troublesome enemy privateers Amerique 10 off Bolt Head in March 1793, Franklin 10, and Ambitieuex 10 in May, and participating in the Channel fleet’s cruises of July-August and October-December, where after attempting to delay Rear-Admiral Vanstabel’s squadron of six sail of the line and two frigates whilst waiting for British ships of the line to come up with them on 18 November, he was publicly commended by having an Admiralty letter read out to every ship’s company. He later assisted the Phaeton 38, Captain Sir Andrew Snape Douglas, in the capture of the French corvette Blonde 20 on 27 November, and thereafter he remained on patrol throughout the severe winter.

In 1794 Thornbrough was ordered to shadow the French fleet by Admiral Lord Howe in the days preceding the Battle of the Glorious First of June, and during the battle itself the Latona darted in from his signalling position to assist the badly damaged Bellerophon 74, the flagship of Rear-Admiral Thomas Pasley. Spiritedly, the Latona exchanged fire with the French line, and her men later took possession of the captured Juste 80.

On 10 July 1794 he was appointed to succeed the promoted Captain Hon. George Keith Elphinstone aboard the thirty-year-old Robust 74, being attached to the Channel fleet, and he took part in Commodore Sir John Borlase Warren’s Quiberon expedition. Having been detached to join Admiral Lord Bridport’s fleet, the Robust arrived just too late to participate in the Battle of Groix on 23 June 1795. Bar a short period off the Texel with Admiral Adam Duncan she remained in the Channel until 1798, with Captain John Gore briefly acting for Thornbrough in early 1796. 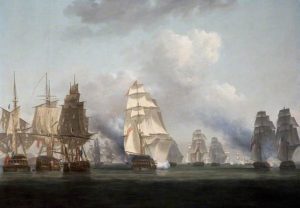 The Battle of Tory Island 1798

The Robust was present at the Spithead mutiny which erupted on 16 April 1797 and thereafter she sailed out of Plymouth with Commodore Sir John Borlase Warren’s squadron. She took an active part in the defeat of the French squadron off Tory Island on 12 October 1798, leading the capture of the Hoche 74 and losing ten men killed and four wounded, following which engagement all the victorious captains were given the thanks of parliament.

From February 1799 Thornbrough flew a broad pennant aboard the Formidable 98 in the Mediterranean, having joined Rear-Admiral Charles Cotton’s reinforcements in response to the breakout of the Brest fleet on 25 April. He was appointed a colonel of marines on 14 February 1799, and he retained the Formidable in the Channel through 1800.

After being promoted rear-admiral on 1 January 1801, Thornbrough commanded the inshore squadron off Brest until the peace of 1802 with his flag aboard the Mars 74, Captain Robert Lloyd. In April 1801 the Mars was obliged to return to Plymouth after being involved in a collision with the Centaur 74, Captain Bendall Littlehales, although she had some difficulty in reaching the port under the tow of the Canada 74, Captain Hon. Michael De Courcy.

On the resumption of hostilities in March 1803 Thornbrough briefly served under Admiral Lord Keith in the North Sea as the commander-in-chief in the Downs. Later based at Yarmouth, he held the command of a detached squadron of eight sail of the line, watching over three Dutch sail and Marshal Auguste Marmont’s invasion flotilla in the Texel. His flag flew in several vessels over the next two years to include from March to April 1803 the Isis 50, Lieutenant Henry Laroche, from which he transferred to the Utrecht 64, Captain Thomas Rogers. However, his designated flagships appear to have initially been the Ambuscade 36, the Gelikheid 64 from March 1803, the Ruby 64 from October, and the Eagle 64 from March 1804, all of which were commanded by Captain David Colby. He also appears to have flown his flag briefly on the Ruby when she was commanded thereafter in 1804 by Captain Charles Rowley, in which year he was also aboard the Raisonnable 64, Captain William Hotham, and the Defence 74, Captain George Hope.

For a few months from March 1805 Thornbrough served as captain of the fleet in the Channel to the temporary commander-in-chief, Admiral Lord Gardner, and in July he raised his flag aboard the Kent 74, Captain Henry Garrett, which was intended for service off Cadiz before this was cancelled following the defeat of the allied fleet at the Battle of Trafalgar.

On 9 November 1805 he was advanced to the rank of vice-admiral, and he commanded the blockade of the Rochefort squadron with his flag aboard the Prince of Wales 98, Captain William Bedford, until the French escaped, to be eventually defeated at the Battle of San Domingo by Vice-Admiral Sir John Duckworth. He thereafter served on the coast of the Vendée until June 1806 when he was invalided home aboard the Malta 84, Captain Edward Buller, having had the excitable Captain Lord Cochrane and Captain George Francis Seymour under his command.

By February 1807 Thornbrough was fit for duty once more, and he joined the Royal Sovereign 100, Captain Henry Garrett and, from 2 August 1808, Captain David Colby, serving under Vice-Admiral Lord Collingwood in the Mediterranean. He was present in the campaign that followed Vice-Admiral Honoré Ganteaume’s breakout from Toulon on 7 February 1808, and he later took charge of the blockade of Toulon whist Collingwood cruised at sea. Retiring ill once more in December 1809, he came home aboard the Apollo 38, Captain Bridges Watkinson Taylor.

From August 1810 until November 1813 Thornbrough was the commander-in-chief in Ireland with his flag aboard the Trent 36, Commander Thomas Young. On 4 December 1813 he was promoted admiral, and on 2 January 1815 nominated a K.C.B.

His last posting was as the commander-in-chief at Portsmouth from April 1815 until May 1818 with his flag initially aboard the Prince 98, and from October 1815 the Queen Charlotte 100, both commanded by Captain Edmund Boger.

He was nominated a G.C.B. on 11 January 1826, and he died at his seat, Bishopsteignton Lodge, South Devon, on 3 April 1834, having earlier lived in Gloucestershire.

Thornbrough was married three times. His first wife was Anne Le Cras, the second daughter of his ex-captain, by whom he had four daughters and two sons. His younger son was Edward Le Cras Thornbrough, who was born on 1 March 1795 at Portsmouth, entered the navy in 1806, served as flag-lieutenant to his father at Plymouth, was posted captain in 1827, and died as a rear-admiral in 1857. The elder son, named William Henry in honour of the prince, was absurdly commissioned lieutenant before his early death at the age of fourteen. Following Thornbrough’s first wife’s death at Exeter in 1801 he married a daughter of Sir Edward Jeynes of Gloucester on 4 December 1802, this lady being the sister-in-law of Admiral Sir William Hotham. Following her death without issue at Bishop’s Tawton near Teignmouth, Devon in November 1813 he married within the next year Frances Le Cras, the younger sister of his first wife.

Thornbrough enjoyed an almost unparalleled sixty years of service. A brilliant seaman, few of his contemporaries could rival him in the practical elements of his trade. He knew his duty well and managed his fleets excellently. His long service resulted in him knowing little of anything else but the sea, and his lack of knowledge of diplomacy and his reputed semi-literacy meant that he was overlooked as the replacement for Collingwood on that admiral’s death. When he temporarily commanded the Mediterranean Fleet, he denied the men shore leave at Mahon and also restricted the officers’ leave. He was described as a young looking ‘very powerful man of pleasing countenance’.