1740-1806. He was born into a long-established Derbyshire family, the second son of John Eyre-Gell of Hopton Hall, and of his wife, Isabella Jessop.

Having spent some time in the Mediterranean from 1757 aboard the Prince 90, Captain Clark Gayton, carrying the flag of Admiral Henry Osborn, and the Guernsey 50, Captain Mark Milbanke, Gell was commissioned lieutenant of the Conqueror 68, Captain William Lloyd, on 6 January 1760, which vessel was wrecked in Plymouth Sound on 26 October that year.

He was promoted commander on 14 October 1762, and his first commission, albeit briefly, was with the fireship Grampus 10 which he left in the following year after the end of the Seven Years War. 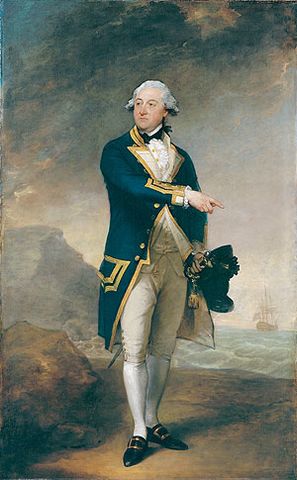 On 4 March 1766 Gell was posted captain of the Launceston 44, which bore the flag of Vice-Admiral Philip Durell in North America, and where he remained despite the admiral s death shortly afterwards. She was paid off in November 1769 after arriving back in England.

There followed a period on half pay until 1777 when he succeeded Captain Mitchell Graham aboard the speedy frigate Thetis 32, going out to North America. During the spring of 1778 he was serving off Scotland in search of the American privateer Ranger, commanded by John Paul Jones, having earlier been ordered to prepare to escort a convoy out to Halifax. In March 1779 he went out to the Mediterranean with a convoy in the company of the Chatham 50, Captain William Allen. On 1 May, in company with the Montreal 32, Captain Stair Douglas, his command was pursued by the French sail of the line Bourgogne 74 and Victoire 74 in the Straits of Gibraltar, and although he escaped, his consort was taken. The Thetis then returned to the Channel for a further few months.

There followed a short period of unemployment caused by a rupture with the First Lord of the Admiralty, the Earl of Sandwich, but this was resolved with the help of influential friends in high places. In the spring of 1780 Gell was ordered to commission the Monarca 68, which had been captured from the Spanish by Admiral Sir George Rodney s fleet in the Moonlight Battle of 16 January, and she joined Rear-Admiral Sir Samuel Hood s squadron sailing for the Leeward Islands in November. On the voyage out however, the Monarca lost her main and mizzen masts and her foretopmast in a gale and she had to return to England under jury masts.

He was next ordered to take the Monarca out to the East Indies in April 1781, where, after arriving in October, and despite the fact that his command was undermanned and not in the best state of repair, he fought in five actions from 1782-3 under Vice-Admiral Sir Edward Hughes against the Balli de Suffren. These were the Battles of Sadras on 17 February 1782 where his command lost one man killed and five wounded, Providien on 12 April where casualties were seven men killed and twenty-eight wounded, Negapatam on 6 July where he lost eight men killed and forty-six wounded, and where his disabled vessel was unable to continue in action, Trincomale on 3 September where casualties were six men killed and twenty-two wounded, and Cuddalore on 20 June 1783 where six men were killed and fourteen wounded. . In 1784 he returned with the Monarca under Commodore Sir Richard King s orders to England, and she was paid off in June.

Gell remained unemployed through the years of the peace before he commissioned the new Excellent 74 in July 1790 during the Spanish Armament, although he left her in the same year when the issues with Spain were resolved.

Having been created a rear-admiral on 1 February 1793, Gell took command of a squadron of six sail of the line and a frigate which in April conveyed the East India trade as far as Cape Finisterre. With his flag flying aboard the St. George 98, Captain Thomas Foley, he remained cruising off that station, and on 14 April his squadron had the great fortune to capture a French privateer, the Gen ral Dumourier 20, and her prize, the Spanish galleon St. Jago, carrying merchandise to the value of nearly 1,000,000. The booty from these captures was taken from Portsmouth to the Bank of England in twenty-one wagons under heavy guard, and although the authorities endeavoured to return the treasure to Spain their ruling was overturned on appeal in January 1795 and Gell was reported as receiving upwards of 70,000, or 10m in today s money. The sequestration of this cargo was cited as one of the reasons for the Spanish declaration of war on Britain in 1796.

Thereafter Gell commanded a squadron in the Mediterranean consisting of the St. George, four sail of the line and a frigate, being present at the occupation of Toulon from August 1793, and co-operating with the Army, and Spanish and French Royalist forces in operations against Genoa. On 5 October his squadron took the frigate Modeste 36 in the harbour of Genoa after she had flouted the laws of neutrality. The French claimed the short and unequal contest to be a massacre, and they used it as pretence to justify the slaughter of the crew of the merchant brig Peggy in March of the following year. Six says after the capture of the Modeste, Gell s squadron also captured the French frigate Imp rieuse 38 off Genoa.

In April 1794 he returned overland to England in poor health. He became a vice-admiral on 4 July 1794 and an admiral on 14 February 1799. In July 1802 he was visited by Vice-Admiral Lord Nelson and Sir William and Lady Hamilton during their tour of Wales.

Gell died of an apoplectic seizure at his John Nash-built mansion of Llanwysg House in Crickhowell, Breconshire, Wales, on 24 September 1806.

Unmarried, he was renowned for a blunt disposition, and was known as Fighting Gell .