On 5 April Rear-Admiral John Gell departed St. Helens with six sail of the line and a frigate in escort of an East India convoy of ten ships which he had orders to see to a safe latitude, following which he was to cruise off Cape Finisterre until the 15th of the month before sailing for Gibraltar.

Having shed two sail of the line, the Boyne 90, Captain William Albany Otway, and the Powerful 74, Captain Thomas Hicks, which for the present remained with the East Indiamen on their voyage to the Cape, the remainder of the squadron were cruising some five hundred miles to the west of Cape Finisterre when a midshipman posted high at the frigate Phaeton s main topgallant mast head observed two sail in the north. The young officer whose sharp eyes would result in the pocketing of unimaginable riches for the officers and men of the squadron was the future admiral of the fleet, Graham Eden Hamond, the son of Captain Sir Andrew Snape Hamond, and a cousin of the Phaeton s captain, Sir Andrew Snape Douglas. 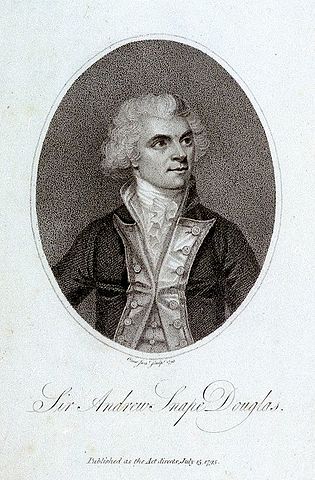 The captain of the Phaeton, Sir Andrew Snape Douglas.

Upon the discovery of the two sail the squadron led by the swift Phaeton immediately gave chase, and the frigate soon caught up with the hindmost vessel which was under French colours but would prove to be the Spanish register ship St. Jago. Pausing only to drop off a boat, Douglas continued his pursuit of the leading vessel whilst the Ganges 74, Captain Anthony Molloy, took possession of the Spaniard. About two hours later the Phaeton managed to come alongside the first vessel which proved to be a French privateer, the General Dumourier 22, armed with six-pounder cannon and manned by just short of two hundred men. Outgunned and outmanned, the Frenchman had no option but to surrender.

An excellent prize though the General Dumourier was in herself, she was nothing in comparison to the unbelievable treasure trove the boarding party found in her hold, for the privateer was carrying six hundred and eighty cases of silver, with each case containing three thousand dollars, in addition to thirty-three cases of gold, jewels and plate. This treasure, which weighed somewhere between fifty-five and sixty tons, had been removed from the Spanish galleon after she had been intercepted by the privateer about seven hundred miles to the west of the Lizard eleven days earlier, having originally sailed from Lima where she had spent two years accumulating her cargo. Upon being attacked by the General Dumourier, and believing that the unrecognised French tricolour was the flag of a Barbary corsair who would either massacre or enslave them, the St. Jago had put up a most spirited defence of five hours duration, losing ten men killed and thirty-seven wounded, and having her upper works shattered.

Once the Phaeton reported her discovery the excited captains of the squadron met in Admiral Gell s cabin to calculate their apparent new found riches, basing their calculations on the belief that they would be entitled to all of the cargo found on the privateer, plus the salvage value of the galleon. A rough estimate was that the booty on the General Dumourier amounted to 500,000, the salvage value for the St. Jago would be 62,500, and the head and gun-money for the privateer was 1,220, amounting to a grand total of 563,720. At this point less attention was paid to the remaining cargo aboard the St. Jago which consisted of copper, bark, cocoa, wool, extract of bark, and fine pewter.

Once the delighted seaman had transferred all of the treasure to the Edgar 74, Captain Albemarle Bertie, she was sent back to England in charge of the prizes to arrive at Spithead on the morning of 28 April, and soon the excited newspapers were reporting that this was without doubt the richest haul ever to be brought to these shores. By the morning of 10 May the treasure had been ferried across to the gun-wharf at Portsmouth where before a crowd of thousands it was loaded on to twenty-one wagons, each flying the British flag above the French tricolour, to set off for London under the escort of a party of dragoons. Four days later, in the early hours of 14 May, the convoy reached the capital and rattled thought the streets towards the Tower of London, accompanied by cavalry, naval officers and common seamen. Here it was received by the governor with much pomp and ceremony before being delivered to the Bullion Office in the Bank.

Meanwhile back at Portsmouth another seven cases of rough diamonds had been found secreted aboard the St. Jago, and having by now discovered that many of the cases of fine pewter were actually gold bars that had been given a thin coating of pewter to disguise their true value, suspicions had been aroused as to what other subterfuges the Spanish might have engaged in to hide the true value of the cargo from their customs officers. With excitement reaching fever pitch orders were given for the Spanish galleon to be broken up in the hope that more booty would be uncovered in her deepest recesses.

There now began an animated debate as to how much prize money the naval force would be entitled to claim. At first it was suggested that as Britain and Spain did not share a treaty of alliance the squadron would scoop the lot, and Gell s agent, acting on behalf of the admiral and all of the officers and men, registered a claim to that effect. Hedging his bets, the agent also entered a coincident claim for all the cargo found on the privateer in addition to the salvage value of the galleon, as this appeared to be the most likely outcome. The Spanish had a different view, and whilst their government entered a claim of 640, 000 guineas on behalf of the state, a number of Spanish merchants claimed their own property to a total of 800,000 guineas. A further sum in respect of the contraband which had not been on the manifest so as to avoid customs duties remained unclaimed by the Spanish, but was claimed in total by the prize agent. Meanwhile, until the issue was resolved the Spanish government announced that it would retain within their own ports all of the British merchant ships that they had recaptured from the French.

Concurrently there was much discussion as to which flag officers would benefit from the capture, with the first reports suggesting that all of the admirals in the Mediterranean fleet, to which Gell was attached, would be entitled to a share, these being the commander-in-chief, Vice-Admiral Lord Hood, who would receive one half of the eighth share due to the officers of flag rank, and his subordinates Vice-Admiral William Hotham, Vice-Admiral Phillips Cosby, Rear-Admiral Sir Hyde Parker, and Rear-Admiral Gell, who would all share the other eighth. Days later it was stated that as Gell had sailed under Admiralty orders the whole admiral s eighth would go to him. And then just to complicate matters even further the Powerful and Boyne entered their own claim for a share of the prize-money on the flimsy basis that they belonged to the squadron and had heard the guns being fired, thus making them accessories to the capture.

On 11 December came the devastating news that the High Court of Admiralty had ruled that the proceeds of the capture should be returned to Spain less one eighth of the St. Jago s true value as salvage, but only as long as the King of Spain decreed within six months that all of the British ships re-taken by the Spanish would be restored accordingly, otherwise the amount would be condemned in full. An appeal was lodged by the prize agents, and to the relief of all the Lords of Appeal eventually adjudged in favour of the captors on 29 January 1795 and set the value of the prize money due at 935,000, or 133m in today s money.The sdecision to make this award would later be cited as one of the reasons for the Spanish declaration of war on Britain in 1796.

During the middle of February 1795 the proportions of prize money that would be remitted to the squadron were published in the newspapers with Rear-Admiral Gell being credited with 140, 930 (about 20m in today s money), although it soon became clear that half of that sum would be due to Vice-Admiral Lord Hood as his commander-in-chief. The captains were to receive 56,372 ( 8m) each, the captain of marines, sea lieutenants and sailing masters 4,145 ( 590k) each, the lieutenants of marines and warrant officers 2,388 (340k) each, midshipmen, clerks, and petty officers 664 (94k) each, and the seamen and marines 87 (12k) each. Meanwhile the Judge of the High Court of Admiralty, Sir James Marriott, ruled that the Boyne and Powerful could not be deemed to have contributed towards the capture, and the two-sevenths of the prize-money which was initially withheld whilst they pursued their claim was subsequently released to the beneficiaries.