After his earlier inconclusive battle with the Bailli de Suffren off Sadras, Vice-Admiral Sir Edward Hughes and his nine sail of the line had undertaken repairs at Trincomale before departing for Madras on 4 March in order to collect more troops. Arriving at that base on the 12th, he sailed once more seventeen days later and within twenty-four hours fell in with two reinforcements from Europe, the Sultan 74 and Magnanime 64, together with their convoy of seven vessels and a French prize. These ships were scurvy ridden, so having sent the convoy into Madras he resumed his course for Trincomale where he intended to hospitalise the sick and to garrison the port. 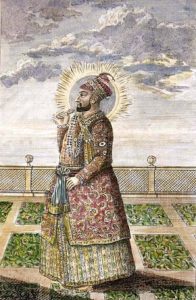 Meanwhile the French squadron had remained close to their ally, Hyder Ali, and after conveying troops to the siege of Cuddalore had put to sea on 23 March in the hope of intercepting the Sultan and Magnanime. Two days later Suffren was joined the by the frigate Bellone 32 and her recent capture, the Chaser 18, which under Commander Thomas Parr had been taken on 15 February. From these vessels he learned of Hughes’ movements, and despite the contrary winds he decided to head south in the hope of intercepting his adversary.

At noon on 8 April the two fleets came in sight of each other, with the French to leeward in the north-east. As Hughes was resolved to land his sick and troops, he proceeded on his course for Trincomale, but over the next three days Suffren remained in company, and in bearing away for the port on the 11th Hughes gave up the weather-gauge. Come the next day the British were backed onto a lee shore, but in Hughes’ words they were resolved neither to ‘seek, nor shun’ a battle with the enemy.

At 9 a.m. Hughes formed his line of battle on the starboard tack with each ship at an interval of two cable lengths, and he then waited as the French, who were some six miles distant, spent the next three hours reforming their own line of battle. When Suffren was finally satisfied with his dispositions he began his approach on a south south-westerly course, the wind being north-easterly.

The action commenced at 1.30 with the approach of the French van being disrupted by British fire as it came in range, forcing it to come about in order to respond. Suffren’s plan was for his van of five ships to isolate the British van, allowing him to concentrate his remaining seven sail of the line on three opponents in the British centre, the Monmouth 64, the flagship Superb 74, and the Monarca 68. Manoeuvring to within pistol shot of the Superb, Suffren’s flagship Héros 74 and the Orient 74 exchanged fearsome fire with their opponent for nine minutes before the Héros, already badly damaged aloft, drifted ahead to join the Sphinx 64 in her engagement with the Monmouth.

Soon the Monmouth was reduced to a dismasted, wheel-less hulk by the Sphinx and Héros, and with flags pinned to the stumps of her main and mizzen masts, and a scrap of sail on her reduced foremast, she drifted away to leeward. Recognising the vulnerability of her position Hughes attempted to support her, but he was prevented from doing so by the cannon of the Orient 74 and Brilliant 64. The Monmouth suffered terribly at the broadsides of the other French ships as they came down, but then a melee formed around her involving the Monarca, Sultan and Hero with the Hannibal, Sphinx and Sévère, and she was eventually towed out of the battle by the Hero at 3 p.m. Such had been the punishment inflicted upon her that she had sustained the astonishing casualty figures of forty-five men killed and one hundred and two wounded out of her company of four hundred. 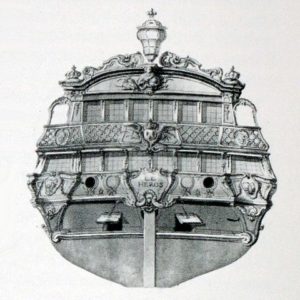 Taking advantage of the Monmouth’s absence the Héros moved into the British line and began pounding the Superb’s bow with her stern chasers, inflicting further damage on a ship that had already been pulverised by the Orient and Brilliant. By the end of the action the British flagship would report casualties of fifty-nine men killed and ninety-six wounded, with one of her fatalities being her first lieutenant, the son of Captain Alms of the Monmouth. In turn the beleaguered British centre made the French pay a heavy price for their concentrated attack, inflicting seventy-odd men killed and over two hundred wounded on four of their immediate opponents. In addition, the Orient lost her mizzen topmast, her mainsail was set on fire, and her main mast badly damaged, whilst Suffren was forced to shift his broad pennant from the damaged Héros, which had lost her foretopmast, to the Ajax.

At 3.40 p.m. with shoal water ahead, Hughes signalled his fleet to wear, thereby also enabling him to safely shield the Monmouth to leeward, and the honours were shared until 5.30 when a violent rainstorm came on and brought an end to the battle. The British then anchored to negate the risk of drifting on to the lee shore, although the French themselves anchored so close by that upon endeavouring to return to his ship after delivering a message Suffren’s flag-lieutenant mistakenly climbed aboard a British vessel instead. Further confusion followed when, in attempting to get a towline aboard the Héros, the French frigate Fine 40 ran aboard the British Isis 50 with her mizzen shrouds ensnaring Captain Lumley’s bowsprit. Before either vessel could realise the consequence of their having hooked an enemy a gust of wind blew the two ships apart.

The morning of the 13th found both fleets five miles apart off Providien attending to repairs and displaying little resolve to renew the action, and they remained in this situation for the next six days. Hughes in particular was wary of losing the appallingly battered Monmouth, and although the French did finally approach in line of battle on the 19th with a half-hearted attempt at spiriting Captain Alms’ command away, they took off to the east once they had established the apparent strength of Hughes’ defence.

Had Suffren but known the incapacitated state of the British ships he might have reconsidered his withdrawal, for Hughes had been obliged to transfer four hundred invalids to the fireship Combustion to be sent to Trincomale for hospitalisation, and he had then informed the governor-general at Fort William, Warren Hastings, that his sickly ships were in such poor repair that he could not possible consider keeping the fleet at sea. In particular, the Monmouth, Sultan and Magnanime had no more than thirty men each to work the ships.

The British admiral landed his troops at Trincomale on the evening of 22 April, by which time Suffren had reached the Dutch settlement of Batticaloa further down the coast of Ceylon where he would spend the next month and a half repairing his ships. All was not well in the French camp however, for not only were Suffren’s captains led by his second-in-command unhappy with him but supplies and reinforcements from Europe had failed to arrive, and scurvy was raging for the want of fresh vegetables and fruit.

Conversely Hughes exhibited his displeasure with the performance of several of his own captains, and George Talbot of the Worcester paid the price, being relieved of his command. Sadly, his removal would also bring about the loss of his life, for he had the misfortune to seek passage home aboard the East Indiaman Grosvenor, which, infamously, would be wrecked on the African coast four months later. .