Cotes entered the Royal Naval College in September 1766 and was commissioned lieutenant on 10 July 1776. Based on the Jamaican station, and nominally the first lieutenant aboard the flagship of the commander-in-chief, Vice-Admiral Clark Gayton, the Antelope 50, Captain William Judd, he enjoyed a number of temporary commands including that of the sloop Porcupine 16, in which he took several prizes. On 5 April 1777 he briefly joined the armed sloop Racehorse, and in July he became the acting commander of the sloop Diligence 10, on which he spent the autumn cruising in the Bay of Honduras. His employment on the Jamaican station came to an end in the spring of 1778 when he returned to England with Admiral Gayton aboard the Antelope. This homecoming could well have been somewhat untimely, given that the first lord of the Admiralty, the Earl of Sandwich, had written to the new commander-in-chief at Jamaica, Rear-Admiral Sir Peter Parker, recommending Cotes services.

In the event Cotes unemployment did not last long, for in July 1778 he commissioned the cutter Busy 10 for service in the Downs. On 18 May 1780, whilst sailing with a squadron in the North Sea commanded by Captain William Allen of the Chatham 50, he gave chase and brought to action a French privateer which on the arrival of the Lizard 28, Captain Francis Parry, struck her colours. She proved to be the ex-British cutter Jackal. During the action four men from the Busy were seriously wounded, and both Cotes cutter and the Jackal suffered significant damage aloft.

He was promoted commander with seniority from 14 January 1782, and was posted captain of the Garland 24 on 27 July, which vessel was serving on the North American station under Captain Charles Chamberlayne until that officer left for home in August. In December he replaced Captain Samuel Clayton aboard the Centurion 50, and his arrival during their engagement ensured the capture by the Hussar 20, Captain Thomas Macnamara Russell, of the French frigate Sybille 36 off the Chesapeake on 22 January 1783.

In May 1790 he recommissioned the Cyclops 28, being employed in the Impress Service and then at Spithead during the Spanish Armament. In the early autumn of 1791 the Cyclops struck a rock whilst approaching Jersey and her hold was soon flooded to a depth of twelve feet. With all apparently lost Cotes managed to beach the frigate by veering out three anchors, and after making rudimentary repairs and depositing all her cannon and stores at Jersey she was able to make it back to Portsmouth in October to be paid off. 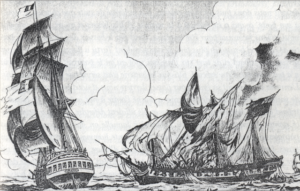 The action between the Thames and the Uranie in 1793

Following the commencement of the French Revolutionary War in 1793 Cotes commissioned the twelve-pounder frigate Thames 32, and in July, whilst in company with the Crescent 36, Captain James Saumarez, he convoyed eighty merchantmen from the Downs to Portsmouth. On 24 October whilst voyaging to Gibraltar, the Thames fell in with the French frigate Uranie 36 in the Bay of Biscay and after a three hour action forced her opponent to withdraw. Unfortunately, having suffered a great deal of damage and casualties of eleven men killed and twenty-three wounded, Cotes frigate was in no position to defend herself when four other French vessels came on the scene, and he had little option but to strike his colours to Captain Zacharie Jacques Th odore Allemand of the Carmagnole 40. The Thames was the first major ship from the British Navy to be lost to the enemy in the war.

After being landed in France the officers and crew of the Thames were subjected to a harsh and bitter imprisonment at Brest, with Cotes later being removed from his countrymen and imprisoned alone. He was eventually released from Quimper to arrive back at Dover on 31 May 1795 in the company of Commander Richard Piercey of the sloop Hound 16, having been exchanged for Captain Jean Fran ois Renaudin, who s ship-of-the-line Vengeur 74 had been taken at the Battle of the Glorious First of June in 1794. Two weeks later Cotes faced a court of inquiry at Portsmouth into the loss of the Thames, and after sitting but an hour this honourably acquitted him of blame.

In November 1797 he was provided with a passport from Paris to allow him to reside in France as the agent for the four thousand British prisoners of war, this being a newly created position that saw a French equivalent come to England. He left for Paris in the early part of the following month with high hopes of facilitating the exchange of Captain Sir William Sidney Smith, although in the event that officer made his own arrangements by escaping from prison on 24 February 1798.

Cotes remained in the post of agent for prisoners until July 1801 when he returned home in very poor health. He died in June 1802.