Died 1803. He was a son of Archibald Dickson, younger brother of Admiral William Dickson, older brother of Lieutenant-General John Dickson of the East India Company, and uncle of Rear-Admiral Sir Archibald Collingwood Dickson.

He was commissioned lieutenant on 19 September 1759, and in March 1765 was placed in command of the schooner Egmont 10, taking her out to Newfoundland and bringing her home in the following year. He was promoted commander on 10 January 1771.

Posted captain on 31 January 1774, Dickson recommissioned the Antelope 50 as flagship of Rear-Admiral Clark Gayton, sailing for Jamaica in May. After being succeeded by Captain William Judd he returned home in 1775 and was appointed to commission the new Greyhound 28 in October, going out to the North American station in April 1776 and participating in the New York campaign of July – October. Having been refitted and coppered at Sheerness in the spring of 1779, the Greyhound participated in the destruction of enemy shipping at Penobscot during the May-August campaign, and took the rebel privateers American Revenue on 19 July, and Nancy on 3 August. She returned to Portsmouth with dispatches shortly afterwards following a twenty-four day passage, and after visiting the Admiralty on 23 September and then having a long conference with the King Dickson went on half-pay on the 25th, being succeeded in command of the Greyhound by his brother.

For the next eighteen months he resided ashore in Hampshire to recover his health before assuming command of the Dublin 74 in the spring of 1781, joining the Channel fleet, in which he remained until the end of the war, and serving in the relief of Gibraltar on 12 April, operations of June-November, the campaign from April-August 1782, and the relief of Gibraltar on 18 October. He sat on the court martial into the loss of the Ramilles 74, Captain Sylverius Moriarty, on 21 September 1782, and left the Dublin in February 1783 when she went into the Ordinary. 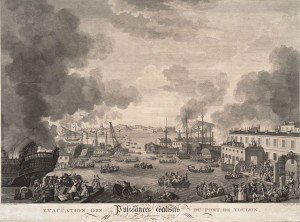 The evacuation of Toulon following its occupation in 1793

From 1786-9 he commanded the guard-ship Goliath 74 at Portsmouth, being present at the Kings Naval Review at Plymouth on 18 December 1789, and during the Spanish Armament of 1790 commissioned the new Captain 74 for service in the Channel, paying her off in August.

Dickson recommissioned the Egmont 74 in January 1793, serving under the orders of Rear-Admiral John Gell when taking the East India trade out to Cape Finisterre in April 1793, off which coast the squadron cruised, and he reportedly earned a healthy prize sum of 56,000, or 8m in today s money, following the capture on 14 April of the French privateer General Dumourier and her prize, the Spanish register ship St. Jago. He was present at the occupation of Toulon from 27 August 1793, and participated in the attack on Mortella Bay during the opening stages of the Corsican Campaign in February 1794.

He was advanced to flag rank on 12 April 1794, was promoted vice-admiral on 1 June 1795, and flew his flag at Great Yarmouth and in command of a division of the North Sea aboard the Veteran 64, Captain James Mosse, from June 1798 into the following year. He briefly had his flag aboard the Monmouth 64, Captain Robert Deans, at the beginning of 1799, and on 19 March transferred to the Monarch, Captain Archibald Dickson, shortly afterwards moving it to the Veteran 64 with that officer.

From April 1800-2 he was commander-in-chief of the North Sea fleet at Yarmouth in succession to Admiral Lord Adam Duncan. In August to September 1800, with his flag once more aboard the Monarch 74, Captain Mosse, he commanded a squadron of four sail of the line, three of 50 guns and a frigate in support of Lord Whitworth who had been sent to Denmark to negotiate over the Freja incident, earning some respect for the way in which he outwitted the Danes. Having become a full admiral on 1 January 1801, he transferred his flag in March 1801 to the Blenheim 74, Captain Peter Bover, in order for the Monarch to join Admiral Sir Hyde Parker s fleet prior to it embarking on the campaign which resulted in the Battle of Copenhagen on 2 April 1801. In the same year his squadron blockaded the Texel.

Dickson married firstly Elizabeth Porter who died in 1799, and secondly, a year later, a young woman named Frances Anne Willis, the daughter of a clergyman. Following Dickson’ s death she married the future Major-General Edward James O’Brien. His only daughter, Elizabeth, married her cousin, Captain William Dickson of the Army, in 1791 but he was killed on Saint-Domingue in 1795 . She later became the third wife of Admiral John Child Purvis. His residence was Hardingham Hall, near Norwich in Norfolk.

Thank you to David Adams for providing information on the Dickson family.