1747-98. He was the only child of Lieutenant Thomas Christian of Hook Norton in Oxfordshire, an ex-naval officer who made his fortune as a privateer captain, and of his wife Anne Hughes who remarried after her husband s early death and earned fame as the poet Anne Penny. He was the father of Vice-Admiral Hugh Hanway Christian, and a distant relation of both the mutineer Fletcher Christian and Captain Brabazon Christian.

Christian entered the navy during 1761 and saw early service in the Channel and the Mediterranean before he was commissioned lieutenant on 21 January 1771, having passed his examination four years earlier.

During 1776 he commanded a sloop attendant to the Leeward Islands station, in which capacity he was despatched by Vice-Admiral James Young at the request of Captain Andrew Snape Hamond to collect from the islands a number of merchant ships with supplies for the army before escorting them to New York. On arrival in North America he was rewarded by being taken on board the Eagle 64, Captain Henry Duncan, the flagship of Vice-Admiral Lord Howe. 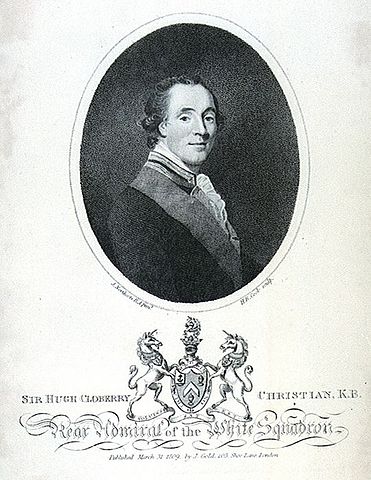 In January 1778, retaining the rank of lieutenant, Christian commanded the sloop Kingfisher 16 which was fired to prevent her capture by the French on 30 July during the early stages of their campaign to take Rhode Island in co-operation with the American rebels.

After returning to England he was posted captain on 8 December 1778 and appointed to the Suffolk 74, bearing the broad pennant of Commodore Joshua Rowley. In February 1779 he arrived with the promoted Rear-Admiral Rowley s reinforcements in the Leeward Islands, taking part in the Battle of Grenada on 6 July where his ship suffered casualties of seven men killed and twenty-five wounded.

In March 1780 he transferred to the captured French frigate Fortun e 40, which had been taken by Rowley s squadron following Rear-Admiral Sir Hyde Parker s skirmish with the French on 18 December 1779. He sailed north to America with the fleet later in the year, returning to the Leeward Islands thereafter before taking his command home to Portsmouth for a refit and coppering in the winter of 1780. He was back in the Leeward Islands fleet with the Fortun e by mid-1781, being present at the Battle of Chesapeake Bay on 5 September, taking the privateer Columbia on 16 October, and being present at the Battle of St. Kitts on 25/26 January 1782. Thereafter he served with the fleet that sailed to North America under Admiral Hugh Pigot, returning home with that force in April 1783 and being paid off in July.

Christian saw no further employment until the late summer of 1787, when he commissioned the brand new Colossus 74 during the Dutch Armament, commanding her afterwards as a guard-ship at Portsmouth until 1790. He was briefly flag captain to Admiral Lord Howe aboard the Queen Charlotte 100 from October during the Spanish Armament of 1790 .

In February 1793 he re-assumed the position of flag-captain to Howe aboard the Queen Charlotte, taking part in the disappointing Channel fleet cruises of July to August and October-December. He left active service in the following spring to undertake a role as a commissioner, being responsible for the French prizes from the Battle of the Glorious First of June at Spithead in July, and assuming the chairmanship of the newly formed Transport Board in Dorset Court, Westminster during August. He resigned this post on 1 June 1795 after being promoted rear-admiral.

In October 1795 Christian was appointed commander-in-chief of the Leeward Islands with instructions to capture the French and Negro-controlled islands, a posting that so infuriated the influential Admiral Sir Charles Middleton that he resigned from the Admiralty Board in protest at such a junior admiral being given this important role. Hoisting his flag at Spithead aboard the Prince George 98, Captain James Bowen, in command of a two hundred strong convoy including eight sail of the line and the transports of Lieutenant-General Sir Ralph Abercromby s sixteen thousand troops, Christian first attempted to set sail on 16 November. This was a month after the requisite departure time, but even so he had not been a day at sea when his force was overtaken by a violent storm. Several ships foundered or were driven ashore and the remainder of the fleet straggled back to Spithead, the Prince George and many others having been rendered unfit for the voyage to the West Indies. Christian thereupon shifted his flag with Captain Bowen into the Glory 98 and tried to sail again, but his departure on 9 December led to his convoy being blown apart in the winter storms although some ships did manage to get through to the Leeward Islands. Returning to Spithead on 29 January 1796, Christian waited two months before setting out for the final time on 20 March with his flag aboard the Thunderer 74, Captain Bowen. In the meantime he had been created a K.B. on 17 February.

Finally arriving at Barbados on 21 April, Christian enjoyed a particularly successful campaign with Lieutenant-General Sir Ralph Abercromby during April to June, capturing St. Lucia on 24 May, St. Vincent on 11 June, and Grenada shortly afterwards, and with these objectives being achieved despite the high degree of sickness in the combined force. It was therefore somewhat surprising that he was superseded by Rear-Admiral Henry Harvey in the summer, and he returned to England aboard the frigate Beaulieu 44, Captain Lancelot Skynner, in October.

In September 1797 he was appointed second in command to Rear-Admiral Thomas Pringle at the Cape, taking passage aboard the frigate Virginie 44, Captain Anthony Hunt, and sharing the company of the Earl of Mornington who was bound for India to become governor-general. Having arrived at the Cape in January 1798 he shifted his flag to the Sceptre 64, Captain Valentine Edwards, and in May to the Tremendous 74, Captain John Clarke Searle, whilst he also assumed command of the station when Pringle returned home in the spring. Apart from assisting in the formation of a force to tackle Tippoo Sahib in Mysore he was little employed before his sudden death on 23 November 1798. The peerage and title of Lord Ronaldsway had already been confirmed upon him, but news of his ennoblement was only received at the Cape after his death.

Christian married Anne Leigh from Thorleigh on the Isle of Wight on 6 March 1775, who after a prolonged illness survived him but two months, having never learned of his death. He had issue three daughters and two sons, the eldest of which, Hood Hanway Christian, was born in 1784, served with him in his formative years, and died a rear-admiral on 31 August 1849. Christian owned the estate of West Hill near Cowes on the Isle of Wight.

A calm and confident officer who was generally well regarded by his contemporaries, Christian was on friendly terms with William Pitt and Lord Melville after joining their government in 1793. He was also a favourite of Admiral Lord Howe, and an early patron of the celebrated Rear-Admiral Sir Francis Beaufort.