For the best part of seven years there had been trouble in the Dutch Republic where two opposing groups, the Orange Party, led by the Stadtholder, William V Prince of Orange, and the Patriots, a group keen to see the restoration of a republic, had been vying for power. This local difficulty had resulted in a minor civil war, and had been exacerbated on a national stage by the intrigues of the court of Prussia, who through the marriage of the influential Princess Wilhelmina of Prussia to William supported the Orange party, and the court of France, who backed the Patriots and were looking for an ally to counter Britain s aims in the East Indies. British interests historically lay in supporting the Prince of Orange, but their influence in Dutch affairs had dramatically reduced as a result of the American War of Independence when the two countries had found themselves in conflict.

As the 1780 s had progressed the British had become increasingly alarmed at the French involvement in Dutch affairs, and so the ambassador, Sir James Harris, had resolved to thwart Versailles by throwing his weight firmly behind the Stadtholder. By delving into the Secret Service fund he had been able to purchase influence and support for the Orange Party, whilst internationally he had sought an alliance with the Prussians. Given that Britain had been left isolated by the continental alliances that had formed against her in the American war the opportunity to seek a new powerful ally on the back of the Dutch problem was one not to be missed. However, the Prussian king, Frederick the Great, proved a reluctant suitor, and being unwilling to displease France he sought a peaceful compromise to the dispute. 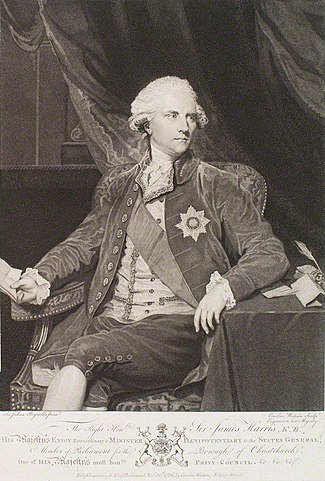 The British ambassador to the Dutch Provinces, Sir James Harris, the future Earl of Malmesbury.

Fortunately for Britain neither the Orange Party nor the Patriots were willing to reach a compromise, and with Harris pulling William s strings the situation swung further into Britain s favour when the death of Frederick in August 1786 resulted in the accession to the Prussian throne of Princess Wilhelmina s brother, King Frederick William. The new king was less concerned with maintaining good relations with the French, who in any event were by now cooling in their support of the Patriots, not least because their finances were in a poor state following the wars with the British in North America. But it was the connived temporary detention of Princess Wilhelmina in June by a Patriot militia, and their subsequent insolent behaviour towards her, which finally led the Prussians to issue an unacceptable ultimatum on 9 September that brought matters to a head.

On 13 September, their ultimatum having been ignored, a Prussian army of twenty thousand men under the command of the Duke of Brunswick set out for the Netherlands to punish those responsible for the insult to Princess Wilhelmina. Fearful that France might attempt to dispute this move, the Prussians had by now sought the support of Britain, and William Pitt s government had agreed to commission forty-sail of the line to demonstrate its resolve.

An immediate problem for the Admiralty was the lack of young and active flag officers available to support those senior and able admirals who would command the fleet in any dispute with France, and inevitably with their Spanish ally. Thus with a decision that would cause great outrage amongst the officer corps and would eventually lead to parliamentary arguments and his resignation, the first lord of the Admiralty, Lord Howe, discarded the system of automatically promoting those captains at the top of the list of seniority, and instead superannuated some forty captains in order to scroll further down the list for those he deemed worthy of elevation to flag rank. Accordingly, on 24 September, sixteen captains were selected for promotion and these included many officers who had demonstrated their capabilities in the American War. They were: John Elliot, William Hotham, Sir John Lindsay, Joseph Peyton, John Carter Allen, Sir Charles Middleton, John Dalrymple, Herbert Sawyer, Sir Richard King, Jonathon Faulknor, Phillip Affleck, Sir Richard Bickerton, Hon. John Leveson-Gower, Sir John Jervis, Adam Duncan and Sir Charles Douglas.

Towards the end of September Admiral Hugh Pigot was appointed to command the fleet in the Channel, with Hon Samuel Barrington his second-in command and the newly promoted Hon. John Leveson Gower the third in command, whilst Vice-Admiral Richard Edwards was appointed to the crucial Nore command and the newly promoted Rear-Admiral William Hotham to the Downs. Over the next few weeks further officers were called to the colours, whilst the urgent need to man the fleet saw press gangs sent out to roam the coastal towns and villages for seamen. Elsewhere newspapers were soon reporting that homecoming East Indiamen had been stopped off the Lizard by a man-of-war and their men pressed into service.

Throughout the first days of October ships were busily commissioning at Plymouth and Portsmouth in order to join those guardships that were already in port, together with another half dozen sail of the line that were getting ready for action along the River Thames and the Kent coast. By the 10th thirty-three sail of the line had been brought into commission in home waters with another half-dozen shortly to follow. Soon it was confirmed that the newly promoted Rear-Admiral Sir John Jervis would join the Channel fleet, and it was rumoured that Vice-Admiral Sir Joshua Rowley was being primed to go out to command at Jamaica.

Yet for all the excitement of a return to arms there were disappointments for some men of ability, such as Captain John Harvey who could only obtain the position of regulating captain at Deal, despite having so brilliantly defended Gibraltar from a fire ship attack in the previous war. Meanwhile Rear-Admiral Hotham was to suffer his own disappointment when in returning to London from Deal he broke his arm after his post chaise overturned near Dartford, leading to his replacement by Vice-Admiral Alexander Hood. But at least he was more fortunate than a 23 year-old lieutenant, James Walker, who whilst rushing home from Vienna to seek an appointment was attacked in his coach by vagabonds near Aschaffenburg, Bavaria, and in attempting to defend himself was thrown into a ditch, knocked unconscious and robbed of his possessions.

In mid-October Ambassador Harris reported from The Hague that the key city of Amsterdam had fallen to the Orange party s forces, and the newspapers began to speculate on the support that the Dutch fleet could provide the British navy in any forthcoming war with the Franco/ Spanish alliance. Intelligence of this French and Spanish strength was soon received when the frigate Southampton 32, Captain Andrew Snape Douglas, came home from the Mediterranean, whilst further news from France revealed that she was getting sixteen sail of the line ready for sea at Brest and had recalled a squadron of evolution from the coast of Portugal. By the middle of October the French claimed to have thirty three ships equipped and ready for action at Brest, Toulon, Rochefort and Lorient, whilst many regiments were on the march in the interior.

But just when it appeared that war was inevitable the hopes of all those aspiring officers seeking fame, honour and glory were dashed. Impoverished France decided to totally withdraw her support for the Patriots, the Prussian army under the command of the Duke of Brunswick restored order in support of William of Orange, and in Paris on 27 October, following solid diplomacy by the future prime minister, Hon. William Wyndham Grenville, France and Britain signed a declaration to decommission their forces.

By early November orders were being sent down from the Admiralty to Portsmouth and Plymouth for books to be returned prior to the fleet being paid off and laid up, and in early December the ships began to decommission. The excitement was over, and whilst those men pressed into service rejoiced at their restored freedom, their captains and admirals commiserated amongst themselves at the prospect of returning to the humdrum life ashore.