Rear Admiral Sir Samuel Hood, the acting commander-in-chief in the Leeward Islands, had only recently returned to Barbados from North America with eighteen sail of the line when he received intelligence from the Leeward Islands governor, Colonel Thomas Shirley, that a French invasion force had arrived off the British island of St. Kitts. The enemy expedition consisted of over six thousand troops under the command of François Claude Amour, the Marquis de Bouillé, and twenty-four sail of the line and two 50-gun ships led by Admiral Francois Joseph Paul de Grasse-Tilli, who had previously departed North America with thirty-three sail of the line on 5 November. 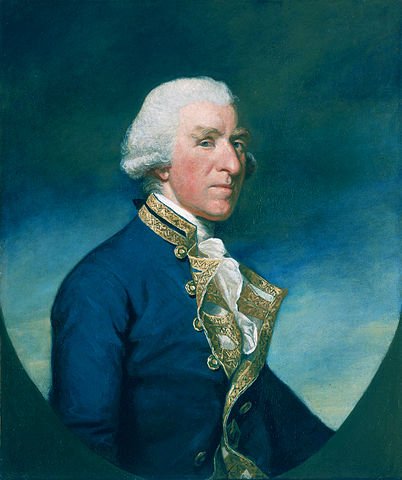 On 11 January de Grasse anchored his fleet in the Basse Terre Roads on the south-west corner of St. Kitts, and with the British garrison withdrawing to their refuge on Brimstone Hill, and the largely ambivalent civilian population surrendering, the French troops quickly established themselves ashore Nine days later the tiny adjacent island of Nevis, lying to the south-east of St. Kitts, surrendered to the French.

Departing Barbados in command of twenty-one ships of the line and nine frigates, Hood sailed north to arrive at Antigua on the 21st where he took on bread, flour and a thousand troops. Leaving that tiny island on the evening of the 23rd, and having been joined by the Prudent 64, he proceeded due west and was off the south-east coast of Nevis, a fifty-mile passage, by daylight on the squally morning of the 24th. At this stage his plan was to bring about an overwhelming attack on part of de Grasse’s unprepared men of war, which were apparently anchored haphazardly in the Basse Terre Roads, and accordingly he instructed his fleet to form line of battle. Almost immediately the Alfred 74 ran aboard the frigate Nymphe 36 whilst attempting to gain her place in the line, and regrettably this accident prevented Hood’s surprise attack. The troops aboard the Nymphe were transferred to another vessel, and whilst the frigate was sent back to Antigua, the partially disabled Alfred’s position at the head of the line was taken up by the St. Albans. A small success occurred later that morning when the outlying frigate Lizard captured the French cutter Espion 16, loaded with ammunition from Martinique that was destined for the French forces on St. Kitts.

During the afternoon de Grasse put to sea with a view to ensuring the safety of another four sail of the line that were daily expected from Martinique, and in so doing his fleet moved to leeward and north-west of Hood. The British admiral now saw an opportunity to outwit his opponent, and after maintaining the advantage of the weather gauge throughout the night he feigned to seek an engagement on the morning of the 25th, thereby inducing de Grasse to edge further away from the coast. With both fleets still to the west of the high cliffs of Nevis, Hood dressed his fleet in line of battle on the starboard tack, heading towards the Basse Terre Roads whilst remaining close into the coast of Nevis. Now de Grasse also came about on a course that would take his fleet in at an angle to the British, being desirous of overtaking their centre and rear.

As the afternoon drew on the British frigate Solebay 28 drove ashore on Nevis, in which hopeless position she was fired on by the French, prompting Captain Charles Everitt to set her alight and seek refuge on the island with his crew As the rear of the British line came under pressure from the advancing French Hood demanded more sail from his ships and sent the frigates ahead to advise them of his plan. Demonstrating incredible nerve, he was intending to slip into the Basse Terre Roads anchorage which had been vacated by de Grasse just the night before, thereby allowing him to take advantage of the superb defensive qualities of an anchorage on a ledge inshore of deep water. Clearly, he had profited by his experience serving under Rear-Admiral Thomas Graves at the Battle of the Chesapeake, when that officer had singularly failed to take advantage of an opportunity to gain the enemy’s anchorage.

By 2.30 de Grasse’s flagship, the Ville de Paris, was firing at long range, and within a half-hour Hood’s rear ships were returning it. Initially the main action was between the last six ships in the British line and the leading dozen or so French, but soon the British centre including Hood’s flagship Barfleur became embroiled in the engagement, resulting in a furious mutual cannonade. Up ahead the leading British ships were moving safely into the roads and turning to starboard, and having reached their appointed berths in line ahead they let go their anchors with springs on the cables so that they could manoeuvre and engage the approaching enemy.

Back out to sea the situation was less encouraging for the last three ships in the British line, the Montagu, America, and in particular the dull sailing Prudent, which had lost her wheel to the first broadside she had received. In danger of being cut off by the French angular approach they were saved by the Canada, Resolution and Bedford, which backed sail in support of the beleaguered trio and met the French assault head-on. This forced the French van, headed by the mighty Ville de Paris, to sheer away from any attempt to double on the rear ships by breaking through the British line. With the covering fire of the anchored British ships flying past their incoming rear to plough into the French centre and rear, de Grasse could do nothing more than pass along the complete line of Hood’s ships, exchanging broadsides to his detriment before sailing away to the south at 5.30. The British admiral’s bold and brilliant tactics had been perfectly executed.

During the following morning Hood redressed his line, with three ships from the disorganised rear filling the gap between the van and the shore, and the last six ships forming a perpendicular line on the edge of the hundred fathom line, out of distance of the French shore batteries. At 7 a.m. de Grasse boldly commenced another assault by sailing up in line of battle to attack the anchored British line from van to rear. In approaching bow-on his unsupported leading ships were exposed to the fire of any anchored British ship in range and were consequently badly damaged. In particular the leading ship Souverain, which had worked some way ahead of her consorts, suffered greatly, with planks of wood flying off her as the British shot struck home. Nothing daunted, de Grasse’s flagship and her immediate consorts held their positions abreast of the British ships, and such was the ensuing cannonade that neither opponent could see each other through the enveloping smoke.

At the rear of the British line the Resolution, Prudent, Canada and Alfred, being somewhat at risk, cut their cables and worked up against the wind to close with the rest of the fleet, although this did not prevent them from coming under a severe bombardment that saw them sustain more damage than their consorts. But after two hours of this pointless assault, described by one French captain as a ‘farce’, de Grasse was obliged to haul off, and although his van attempted a further brave attack on the British rear the same afternoon Hood’s fire, led by the Barfleur, was so resolute that with many holes below the water line the Ville de Paris was forced to retreat, and the action concluded. During the three engagements the British had lost 72 men killed and 244 wounded, the French 107 killed and 207 wounded.

In the event Hood’s sterling defence proved to no avail as the troops on Brimstone Hill, which he had originally been told would withstand the French siege, were overwhelmed and forced to surrender on 13 February. Included in their number was Hood’s emissary to the garrison, the son of a St. Kitts official, Lieutenant William Fahie of the Russell, who was forced to surrender after two brave sorties ashore. Although Hood had earlier been able to disembark the troops collected at Antigua these men had been forced back on board within twenty-four hours, and with no prospect of them defeating the superior French force they had been sent back to Antigua aboard the Convert and Fortunée.

Meanwhile out to sea the French fleet had grown to a strength of thirty-two ships of the line, and with their victorious army ashore being able to set up mortars on the heights, and with an expected reinforcement of twelve sail of the line under Admiral Sir George Rodney not appearing –after recuperating in Bath the official commander-in-chief had only left Cawsand Bay on 14 January and reached Barbados on 19 February with reinforcements – there was nothing Hood could do but cut his losses and escape.

The captains were called together, and watches were synchronised. At 11p.m on 14 February, and without the merest signal, the cables were cut and the twenty-two ships slipped out to sea leaving lights burning to provide an illusion of their still being at anchor. The French were only some five miles away re-provisioning at Nevis, but the first they knew of the British departure was the absence of shipping in the anchorage on the morning of the 15th.

After making good his escape Hood eventually joined up with Rodney to windward of Antigua on 15 March. The two admirals then tried to bring the French fleet to action, but de Grasse had already reached Martinique on 26 February, and the British therefore returned to St. Lucia to refit their battle-scarred and under-supplied ships. Meanwhile the sickly Captain Hon. Henry Edwyn Stanhope of the Russell had been sent home with despatches aboard the fireship Tisiphone, arriving at the Admiralty on 12 March. His vacating of the Russell resulted in the posting of the Tisiphone’s promising young commander, James Saumarez.