On 12 October the Admiralty issued the commander-in-chief of the Channel fleet, Admiral Lord Howe, with new orders to the effect that as soon as he was joined by the Defence 74, Captain James Gambier, and Bellona 74, Captain George Wilson, he was to put to sea with the objective of protecting the outward-bound West Indies and Mediterranean convoys, and to prevent any French expedition from departing for the Caribbean. Cognisant with the difficulties possible under an autumn cruise, he was instructed to keep at sea as long as circumstances dictated, or until he felt it advisable to return to port.

Unsurprisingly given the season, the fleet of twenty-four sail of the line remained pinned in Torbay by strong westerly winds for much of the succeeding days, and when it did finally get to sea the weather soon forced it to put back, with several vessels having suffered damage in the gales. On 25 October Howe was able to detach Commodore Thomas Pasley with his pennant ship Bellerophon 74, in company with the Suffolk 74, Captain Peter Rainier, and the frigates Hebe 38, Captain Alexander Hood, Latona 38, Captain Edward Thornbrough, and Venus 36, Captain Jonathon Faulknor, to seek out five French frigates that had chased the Circe 28, Captain Joseph Yorke, into Falmouth two days previously. Forty-eight hours later Howe’s remaining twenty-two sail of the line managed to get away from Torbay with a fair wind to the westward, only to be recalled by a swift-sailing cutter with dispatches from the Admiralty.

The new delay did little to quench the frustration that had been building over the lack of activity, and some ironic criticism was directed at Howe, with one newspaper declaring that he would shortly enter port after ‘an active and brilliant campaign in which he has more than once actually been in sight of the enemy!’ The delay was just a short one however, for by 31 October the fleet was at sea again, passing Plymouth as it headed to the south. On 7 November Commodore Pasley rejoined Howe off the Scilly Isles having failed to find the French frigates, but ten days later the Gibraltar 80, Captain Thomas Mackenzie, and the Suffolk 74, Captain Peter Rainier, parted company leaving Lord Howe once more with twenty-two sail of the line. 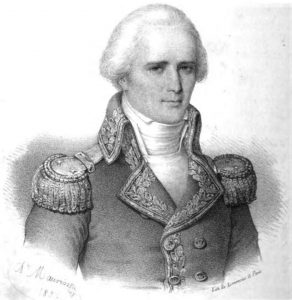 The opportunity for Howe to achieve something tangible at last arrived at 9 a.m. on 18 November when the Latona sighted a fleet to windward in Cancale Bay. The strangers would prove to be a squadron of six 74-gun ships and two frigates from Brest under the command of the 47-year-old Rear-Admiral Pierre Jean Vanstabel, who had put to sea on 13 November to intercept a thirty-nine-ship expedition, including three sail of the line, that was outward bound to the West Indies under the command of Vice-Admiral Sir John Jervis.

Fortunately, Jervis’ departure from St. Helens had in fact been delayed and he would not get away for another two weeks, but the French were not to know this, and led by their frigates they bore down on the Channel fleet in the expectation of some easy pickings. This case of mistaken identity should have put them in great jeopardy, and it was to their good fortune that the leading ship in the British line, the Ganges 74, Captain Anthony Molloy, failed to repeat the Latona’s signals. Accordingly, it was only when the French were hull up from the British fleet at about 10 a.m. that their identity was established. For his part it was another half-hour before Vanstabel realised his error, whereupon he hove too some ten miles distant to windward and then put about on a brisk south-easterly wind. With Howe making the signal for every ship to engage as they came up, the 74’s Russell, Audacious, Defence, Ganges and Bellerophon took up the chase in heavy seas, but soon the French superiority of sailing was established, and in trying to close them down the Russell sprang a topmast, and at 11a.m. the Defence lost both her fore and main-topmasts. The Vanguard and the Montagu would also carry away main-topmasts as they maintained the chase.

With the capital ships struggling to get into action it was left to the frigates to forge ahead in the squally conditions. The Latona was in the van, and by 1 p.m. she had began engaging the rear-most French frigate, presumed to be the Sémillante 36, and by 4 p.m. was in a position to cut her off. This attempt was thwarted by Vanstabel who wore ship in the Tigre and unleashed two broadsides at Thornbrough’s frigate, although thankfully only two balls struck home. Luffing up, the Latona then bravely let fly her own broadside at the Tigre, and in doing so managed to inflict some damage.

As the light of the day disappeared over the horizon Howe signalled his fleet to maintain the pursuit, and by 6 p.m. the French, whose seamanship had won the admiration of their enemy, were some four miles to windward. During the exceptionally dark hours that followed a change in the wind to the east south-east at about midnight was in the British favour, and at 2 a.m., with the wind having shifted further around to the east, the French bore away to the west south-west, having made the decision to separate in order to save themselves. At this point the frigate Southampton 32, Captain Hon. Robert Allaster Forbes, which was carrying a press of sail never seen before by her officers, moved to within a half mile of one French ship of the line and began firing upon her without receiving any shot in return. A half hour later Commodore Pasley’s Bellerophon, which had left the rest of the British fleet out of sight in the clearing skies, suddenly found herself outnumbered in the midst of several enemy vessels, but she fortunately remained unrecognised as the weather closed in once more.

With the dawn breaking the Southampton discovered a large sail of the line and a brig some two miles ahead of her. No other British vessel was in sight at this time, so sensing the opportunity of an easy kill the Frenchman tried to lure the Southampton into a trap by dropping the brig astern. Fortunately, the Russell made her appearance before any harm could come to the frigate, but when the Southampton signalled ‘enemy in sight’ and the Defence repeated this to Lord Howe the admiral unaccountably, or so it appeared to the frigate’s officers, threw out the signal to recall his cruisers. An equal frustration attended the Latona and the Phoenix 36, Captain Sir Richard Strachan, which were standing towards a vessel that was struggling to join three others in the west, for upon signalling to the Bellerophon that four enemy sail of the line were in sight they found themselves recalled by Commodore Pasley.

As a result of the superior sailing qualities of his ships and his skilful handling of the situation Rear-Admiral Vanstabel had kept his squadron intact, and the French were rewarded within hours when they stumbled upon the homeward-bound Newfoundland convoy which had parted company in a heavy gale three days out of St. Johns from its escort, the Stately 64, Captain John Samuel Smith with Rear-Admiral Sir Richard King’s flag, and the Syren 32, Captain John Manley. Vanstabel was able to take seventeen prizes out of the convoy and he eventually made Brest on 30 November, although he was unable to add to that tally the frigate Nymphe 36, Captain Sir Edward Pellew, which he fired on off that port but was unable to rein in.

Back in England the newspapers were anticipating news of the capture of half a dozen French sail of the line, as by now the Admiralty had received intelligence that Howe had intercepted the enemy and that there was no possibility of their escape. As the days went by and no further news came in speculation became rife that a chase down the Channel and out into the Atlantic Ocean had been undertaken. Success was taken as all but guaranteed, and when at the beginning of December news filtered through that the French had escaped many did not believe it. Only on 7 December, when the sloop Orestes, Commander Lord Augustus Fitzroy, entered Plymouth did confirmation finally come that the Channel fleet had failed to capture a single enemy.

On 12 December the fleet, being desperately short of provisions, returned to Torbay where Lord Howe received orders to send eight sail of the line, including the Cumberland 74 and Ganges 74 with a proportionate number of frigates, to Plymouth, and to await further orders at Spithead. A general disappointment in the country regarding the failure to bring the French to battle was illustrated by the lambasting of Howe in verse, and it was supposed that he would resign the command of the Channel Fleet in favour of Admiral Hon. Samuel Barrington. In reality however, the disappointing outcome of the cruise was not Howe’s fault, as his ships had proved to be no match for the swifter-sailing enemy.