c1745-1827. He was the third son of General Michael O Brien Dilkes and of his wife Anne Cummin. His grandfather was Rear-Admiral Sir Thomas Dilkes, and he was the uncle of Captain Charles Dilkes.

Dilkes was commissioned lieutenant on 31 July 1762.

During the autumn of 1779 he was appointed the first lieutenant of the Alcide 74, Captain John Brisbane, which vessel sailed with Admiral Sir George Rodney s fleet for the relief of Gibraltar in December. Following the interception of the Spanish convoy off Cape Finisterre on 8 January 1780 he was sent home with one of the prizes.

Promoted commander on 1 August 1782, Dilkes joined the sloop Lisburne 14 at Sheerness and commanded her in the Downs until May 1783. During the peace he entered the Portuguese service in frustration at the lack of opportunities in the British Navy, and he eventually reached the rank of rear-admiral.

Returning to the Royal Navy, Dilkes recommissioned the sloop Shark 16 in July 1790 during the Spanish Armament, and he was one of many officers posted captain on 21 September. From 27 September to 9 October he was in command of the Royal Sovereign 100.

In August 1795 he joined the newly launched Madras 54 in the Thames, being attached to Vice-Admiral Sir Alan Gardner s squadron in the Channel that winter, and sailing at short notice for the Leeward Islands from Portsmouth in February 1796. Here he superintended a landing of troops at Anse La Raye to the west of the Cul-de-Sac on St. Lucia during the Leeward Islands campaign of April-June. He was still on that station two years later, and after a refit at Chatham in the last three months of 1798 the Madras served in the North Sea. 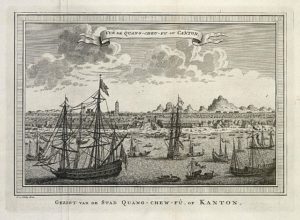 Dilkes was in China during 1799 where he became embroiled in a court case that could have had unfortunate consequences.

In June 1799 the Madras went out to China where in February of the following year Dilkes became embroiled in a dispute arising from the fatal shooting of a Chinese youth who it was claimed had been attempting to cut the cable of the schooner Providence. Whilst going ashore to attend court with the accused party Dilkes was pilloried by the local population and was then thrown out of the court when he demanded that the accused by allowed to speak. Fortunately the local viceroy smoothed over the matter and the Madras returned to England via St. Helena in July, where having reached the Nore on 2 October Dilkes wrote to the first lord of the Admiralty, Earl Spencer, offering him two exotic birds. Amongst the convoy of up to twenty East Indiamen which he escorted home was one vessel, the Cartier, carrying what was claimed to be the richest ever cargo to arrive in Europe, valued at 500,000 or over $54m in today s money. Dilkes left the Madras shortly afterwards when she entered dock for repairs.

Although it was reported that he would join the Zealous 74, Dilkes instead recommissioned the Raisonnable 64 in January 1801 and commanded her in Admiral Sir Hyde Parker s reserve division at the Battle of Copenhagen on 2 April. This vessel was eventually paid off in April 1802.

From December 1803 he was the flag-captain at Plymouth to both the unpopular Admiral John Colpoys and then the rapacious Admiral William Young aboard the Salvador del Mundo 112. He left this role upon being appointed the resident commissioner at Jamaica in September 1804 in succession to Captain Charles Stirling, a position he retained until he was advanced to flag rank on 28 April 1808.

He married the daughter of Rear-Admiral Farmery Epworth, who was the sister of Captain Farmery Predam Epworth, at Plymouth in September 1804,