1730 -1805. He was born in Belfast, the second son of Charles Brice, an army captain of Castle Chichester near Kilroot in Ireland, and of his wife Jane Robinson.

Brice entered the navy on 29 October 1746 aboard the sloop Speedwell, Commander James Gambier. He was commissioned lieutenant on 29 April 1756, and in February 1761 he became commander of the sloop Swallow in an acting capacity for Commander James Cranston. He took the French privateer Sultan 10 off Bayonne in the same month and was promoted commander on 3 July 1761. Almost immediately he commanded the yacht Mary which was attendant to the squadron sent to bring Princess Charlotte to England in August for her marriage to King George III. Having then gone out to the Leeward Islands in command of the bomb-ketch Basilisk, he was wounded at the reductions of Martinique and St. Lucia under Rear-Admiral George Brydges Rodney in early 1762. On 26 May he was posted to the frigate Crescent 32, replacing Captain Thomas Collingwood, and he returned to England in 1764.

In 1766 Brice assumed the name of Kingsmill, his wife Elizabeth Corry having acceded to the prosperous Berkshire estates of her uncle, William Kingsmill. 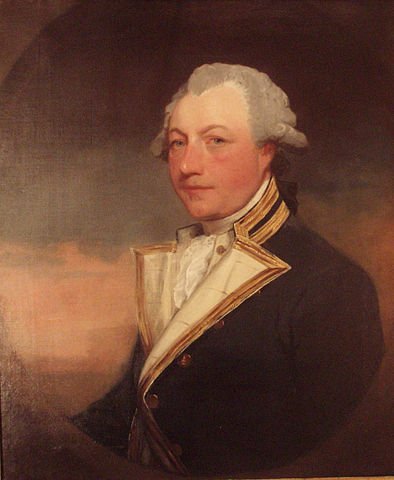 Kingsmill remained unemployed until March 1778 when he commissioned the new Vigilant 64, but although he fought at the Battle of Ushant on 27 July he resigned after the court martial of Admiral Hon. Augustus Keppel in fury at the machinations of the administration. Being elected M.P for Yarmouth on the Isle of Wight in 1779, he sat in the House of Commons as an anti-government member for the next year, and he did not apply for employment until after the fall of Lord North’s government in 1782.

Upon returning to service he was appointed to the Elizabeth 74, although she was not ready in time to serve in the Channel fleet s operations of 1782. In January 1783 he departed England in command of a squadron consisting of the Grafton 74, Captain Sir John Hamilton, Europe 64, Captain Arthur Phillip, and Iphigenia 32, Captain William Parker, with secret orders to attack Spanish possessions in South American before sailing around Cape Horn to join the East Indies squadron in an attack on Manila. Unfortunately a storm in the Bay of Biscay dispersed the squadron, and he returned to England to find that peace had been made with the Spanish. After paying the Elizabeth off, he recommissioned her in March and continued to command her as a guardship at Portsmouth for the next three years, paying her off for the second time in early 1786.

On 5 April 1784 Kingsmill was elected M.P. for Tregony in Cornwall as a government supporter, holding the seat for the next six years and never speaking, although he did occasionally vote against the prime minister, William Pitt. On 22 October 1790 he sat on the court martial into the mutiny on the Bounty which had occurred on 28 May 1789, but apart from a brief period in command of the Duke 90 during the Spanish Armament of 1790, , and again in 1791 during the Russian Armament, he remained unemployed for the next two years.

Kingsmill was promoted rear-admiral on 1 February 1793, and from that year until 1800 he served as the commander-in-chief at Cork, his force of frigates and smaller vessels guarding the coastline and western approaches in defence of the trade convoys. During his time in Ireland a dozen French frigates were taken by his frigates, his cruisers earned him a great deal of prize money, and all French attempts to invade the country were thwarted, particularly so in December 1796 when the adverse weather was significantly in the British favour. He flew his flag in 1793-4 aboard the Swiftsure 74, Captain Charles Boyles, and thereafter mainly aboard the hospital ship and French prize l Engageante, commanded by Lieutenant William Fry from 1795, Lieutenant Henry Parker until he drowned in January 1797, and then Lieutenant Fry again. He also flew his flag aboard the Polyphemus 64, Captain George Lumsdaine, from 1796-1800. He became a vice-admiral on 4 July 1794, an admiral on 14 February 1799 and was created a baronet on 24 November 1800.

Kingsmill returned to England in December 1800, taking passage to Bristol aboard the Kangaroo 18, Commander George Pulling, and he died at his seat of Sydmonton Place, Newbury, Berkshire on 23 November 1805. His estate passed to the Reverend John Stephens of Chewton Mendip, Somerset.

He left no issue from his marriage to the heiress Elizabeth Corry whom he had married in 1766, and who died in 1783. Nevertheless, when Captain John Pulling drowned along with Captain John Drew at Plymouth on 11 January 1798 it was stated that he had recently married a daughter of Admiral Kingsmill. As this lady was the sister of the Reverend John Stephens who had inherited Kingsmill s estate, one would assume that the two were his natural children.

Lord Sandwich described Kingsmill as a good officer, but discontented and complaining . He was apparently of a gentle, pleasant generous disposition, and a good friend of Vice-Admiral Lord Nelson and of Captain William Locker.