The Russian Armament – March to September 1791

Although Britain had been at peace for the best part of eight years, her government had maintained a robust attitude to European affairs, as evidenced by its re-commissioning of the fleet for the Dutch Armament of 1788 and the Spanish Armament of 1790. One particular concern was the increasingly territorial ambition of a rejuvenated Russia, and in order to keep her in check the government had formed the secret Triple Alliance in 1788 with the Kingdom of Prussia and the United Provinces of the Netherlands.

For several years Russia and the Ottoman Empire had been at war, and anxious lest the ascendancy of the former might shift the balance of power decidedly in her favour William Pitt s government, along with King Frederick William II of Prussia, determined to bring the conflict to a conclusion. The government had not reckoned with the imperious intransigence of the Russian Empress, Catherine the Great, who appeared determined to extend her dominance of the Black Sea to the control of the Turkish capital of Constantinople itself. Nor had they reckoned with her imperial deviousness, for learning that Pitt was considering a hard line with her country, Catherine had urged the Russian ambassador in London to make friendly advances to the leading light in the Whig Opposition, Charles James Fox, and to other senior members of the British establishment and press. 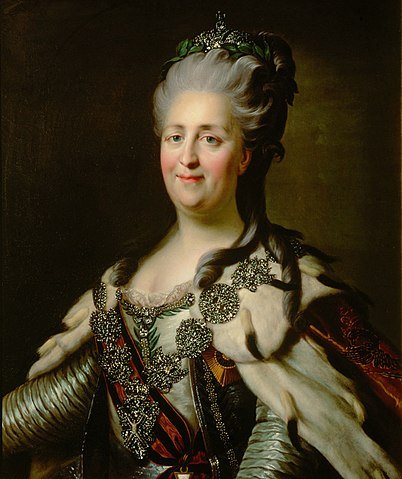 By March 1791 concern regarding a Russian hegemony in Eastern Europe, including a threat to Poland, and her continued occupation of Ochakov, the base on the Black Sea that had been captured from Turkey in 1788, was such that upon receiving a promise of neutrality from Catherine s ally Austria, Frederick William wrote to the Sultan advising that he would declare war on Russia if she did not make peace with the Ottoman Empire. Conspiratorially, the Prussian King also had territorial ambitions of his own, and emboldened by the promise of British maritime support he urged the Turks to renew their efforts so that the Russians would have to battle on two fronts, thereby allowing the Prussian aspirations to be realised.

On 25 March the British government considered the threat to peace significant enough for the Admiralty to issue orders for the manning of the fleet. At the same time the cabinet forwarded a memorandum to the King announcing that they planned to support the Prussians by sending a squadron of three dozen sail of the line to the Baltic, and a further dozen to the Black Sea, where they would confront the Russian fleet of twelve sail of the line at Ochakov.

For some time eleven sail of the line under Rear-Admiral Samuel Granston Goodall had already been kept in readiness at Portsmouth awaiting the command of Vice-Admiral Lord Hood, should it be necessary to take up arms. Now the regulating captains, George Vandeput and Harry Harmood, were called to a meeting at the Admiralty, and those officers who had served with the Impress Service during the Spanish Armament of 1790 were instructed to re-open their rendezvous points for any seamen who wished to enlist. From Portsmouth, Hood s flag-captain, John Knight, set off for London to obtain pilots with knowledge of the Baltic, and orders flowed in the opposite direction to equip with four months provisions those additional ships that were being commissioned. The Admiralty also decided to seek the counsel of three officers who had experience and knowledge of the Baltic, these being Captains James Hawkins, William Sidney Smith, and William Bentinck. It appeared that nothing was being left to chance.

Yet despite this mobilisation there was significant opposition in Parliament, in the newspapers, amongst the influential mercantile community, and in the country as a whole to the threat of war, and such was Charles James Fox s oratory in Russia s favour that Catherine instructed her ambassador in London to obtain a bust of the celebrated Man of the People . Although a motion of support for the government s measures was passed on 29 March, some of the cabinet were clearly not on side, and the next day Pitt himself began to backtrack when it became clear that other members of the government were considering a change in policy. Diplomatic moves on the continent, in particular on behalf of the influential ambassador to the peace-desiring United Provinces, Lord Auckland, were also beginning to cast doubt on the wisdom of the government s direction, and accordingly on 1 April Pitt decided to take pause.

By the middle of April a change at the Foreign Ministry, together with increasing concerns about the intentions of the revolutionaries in France, was hinting at a reverse in British policy, much to the disappointment of the Prussians who were desperate to take advantage of the alliance with British sea-power in order to further their own ambitions. Nevertheless the impressment of seamen continued, and right through April there was an expectation that Lord Hood would leave his post at the Admiralty to take the fleet to the Baltic, where he would be joined by a dozen Dutch vessels. The excitement heightened at the beginning of May when Hood finally took off for Spithead, and it was soon reported that the Grand Fleet for the Baltic would rendezvous in the Downs on 14 May.

Yet nothing happened, and soon Hood was back in London. Towards the end of May rumours began circulating that the Russians and Swedes had made an accord, and that they would sail down the Baltic to coerce the Danes into forming an alliance that would prevent any British incursion into that sea. Apparently the Russians had nearly forty sail of the line ready to sail at Kronstadt, which combined with the Swedish Navy would outnumber the Anglo-Dutch force. The newspapers reported the Prussian fury at the British tardiness to do something tangible, but they remained convinced that Hood would soon be on his way. Yet still not a capstan was manned nor a sail set, despite assurances in the second week of June that the commander-in-chief s comestibles had been ordered, and that a vanguard of eleven sail of the line under the command of Vice-Admiral William Hotham were sure to sail that week.

Then in the third week of June Hood at last kissed hands with the King and departed for Portsmouth. His ships, bulging with impressed East India Company seamen, could even afford to let some recruits go, yet there was no leave ashore for the officers, as they were obliged to remain on board so that they could sail at a moment s notice. Surely something would happen now!

But no, the fleet remained at Spithead, held in readiness to sail, and finally in July the Government s reversal in policy was completed when a treaty was signed between the Triple Alliance and Russia to the detriment of the Ottoman Empire. As tensions receded the officers were able to spend time ashore, and although Hood was back at Spithead from London in mid-August his ships soon began receiving orders to return to port to be paid off. The crisis was well and truly over, and by the end of September the majority of the fleet had been decommissioned.

Grand Fleet at Portsmouth in July: