c1733- 1803. He was the eldest son of Sir William Rich, 4th Baronet of Sonning, and of his wife, Elizabeth Royall of Minstead, Hampshire.

Of his early service little is known, but Rich was commissioned lieutenant on 25 March 1758 and became the 5th Baronet of Sonning upon the death of his father on 17 July 1762. In April 1763 he commissioned the cutter Anson 6 for service off Portland, retaining her into 1766.

He was promoted commander of the sloop Senegal 14 on 1 March 1769, serving on the Halifax station, and was posted captain of the Gibraltar 24 on 14 February 1771, which he retained in North America until 1773. 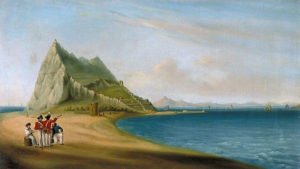 In April 1775 Rich commissioned the new frigate Enterprise 28 in the Thames, going out to the Mediterranean from Spithead during July. On 25 July 1776, whilst in the Bay of Biscay, he fell in with a French squadron of two sail of the line and a number of frigates commanded by the Duke de Chartres, who summarily asked Rich to bring to and report aboard his flagship. When the latter suggested that if the Frenchman was desirous of a communication he should repair aboard the Enterprise the outraged duke threatened to open fire, but after being assured by Rich that he could not obey any order but that given by a superior officer the duke relented and courteously invited the Enterprise s first lieutenant aboard instead.

Continuing in the Mediterranean, the Enterprise took the American vessel Hope 16 in March 1778, and in May she was sent beyond the Straits of Gibraltar to look out for the French Toulon fleet which was imminently expected to sail. On 16 May she caught sight of the French at midnight but lost them shortly afterwards, however on being joined by the Proserpine 28, Captain Evelyn Sutton, the two frigates kept watch on the French over the next few days to ascertain their course before both headed for England, the Enterprise reaching Plymouth on 3 June, a day after the Proserpine had entered Falmouth.

Returning to the Mediterranean, the Enterprise drove a 14-gun French privateer ashore on the Barbary Coast in 1779, where her crew were made prisoner by the Moors. She later captured the American schooner Venus which was laden with tobacco, and during July 1779 she managed to escort supplies into the besieged Gibraltar from Tangiers. Shortly afterwards she escaped capture by a Spanish squadron after re-visiting the Barbary Coast, and remaining at the Rock for some months afterwards, Rich joined other senior military officers on the council of war that conducted the defence of the territory.

Following Admiral Sir George Rodney s victory over the Spanish at the Moonlight Battle in January 1780 and his fleet s subsequent relief of Gibraltar, Rich was ordered to commission the prize Princesa 70. Initially serving in the Channel, he went out to the Leeward Islands in November with Rear-Admiral Sir Samuel Hood s reinforcements, and he commanded the Princesa at the Battle of Fort Royal on 29 April 1781. Shortly afterwards, and following the death of Captain Walter Young, he joined Rodney s flagship Sandwich 90 and sailed her to Jamaica in order for her to be hove down. In August he departed that station in command of the Princess Royal 90 as part of a convoy commanded by Commodore George Bowyer, although bad weather caused several merchantmen to sink on the voyage home, and the Princess Royal only reached port with three days supply of bread and in a most distressed condition. 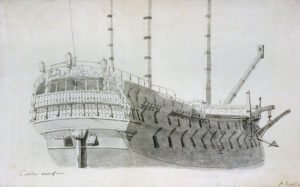 HMS Culloden, which Rich commanded in his later years, and in which he also flew his admiral’s flag.

During June 1786 he recommissioned the guard-ship Culloden 74 at Plymouth, and in retaining the command for the usual three years he also served in Rear-Admiral Hon. John Leveson-Gower s squadron of observation during its two month cruise around the British Isles in 1787. During May 1790 he recommissioned the Vengeance 74, which formed part of the grand fleet in the Spanish Armament, and which he retained through the Russian Armament of 1791 until paying her off in September.

Rich recommissioned the Culloden 74 in December 1792, and he served with Rear-Admiral Alan Gardner s squadron which embarked on its ultimately disappointing Leeward Islands campaign during March 1793. Whilst on that station the Culloden took aboard over a thousand French royalist civilians who had been driven into the sea at St. Ann s Bay, Martinique, and transported them to Barbados.

He was advanced to the rank of admiral on 12 April 1794, whereupon he briefly left the Culloden before hoisting his flag aboard her in July whilst she was commanded by his successor as captain, Isaac Schomberg. Remaining in the Channel, the Culloden was commanded in the autumn by Captain Richard Rundle Burges, but Rich was superseded at his own request in November when his squadron of half a dozen sail of the line was ordered to the West Indies.

He was promoted vice-admiral on 1 June 1795 and during 1796 he flew his flag in the Channel aboard the Impregnable 98, commanded by his godson, Acting-Captain Edward Owen. After entering retirement he was further advanced to the rank of admiral on 1 January 1801.

Admiral Rich died on 6 April 1803 at Sonning near Reading.

He married Anne Willis of Digswell, Hertfordshire, whose sister had married Captain Andrew Barkley, and although he had no legitimate issue from this marriage he did have six illegitimate children from a relationship with Elizabeth Burt, the daughter of a general. Their son, George Frederick Rich, entered the service in 1795, and served for many years with Admiral Sir Edward William Campbell Rich Owen, of whom his father was an early patron and godfather. He was promoted lieutenant on 30 December 1805, commander on 26 October 1813, and posted captain on 1 July 1823, and he served as flag-captain to Owen in several of his commands. Another son, Charles Rich, entered the navy in 1801, again served with Owen, was commissioned lieutenant on 28 June 1810, commander on 27 January 1816, and posted captain on 28 January 1838. Their daughter Grace married Captain Anthony Abdy, and their youngest son, Sir Henry Rich, entered parliament in the Liberal interest and was created a baronet in 1763.