1724-1797. He was christened in July 1724, the fifth and youngest son of John Gayton and his wife, Eleanor Clark, and the much younger brother of Admiral Clark Gayton. A sister married Captain Michael Everitt and he was thus the uncle of Captain Michael Everitt and Admiral Charles Holmes Everitt Calmady.
Gayton was commissioned lieutenant on 6 March 1744 and promoted commander on 11 December 1759. He was immediately appointed to the Fly 8 which he later commanded in the expedition to Belleisle led by Commodore Hon. Augustus Keppel in 1761, being sent under the orders of Captain Sir Thomas Stanhope to assist in the destruction of the works on the Isle d Aix shortly afterwards. He captured the privateers Hasard on 13 August 1761, and Marie-Th r se twelve days later before being paid off in March 1763. 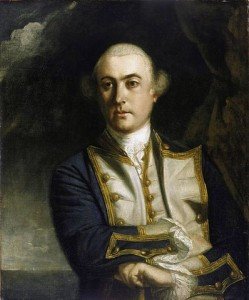 Captain Gayton was flag-captain to Commodore Hon. John Byron at Newfoundland in the early 1770’s

He was posted captain on 26 May 1768, and in February 1769 recommissioned the Antelope 50 with the broad pendant of Commodore Hon. John Byron, going out to Newfoundland in June 1769, and again in May 1770, before being paid off in February 1771. He then recommissioned the Panther 60 which took the Byron s broad pennant out to Newfoundland in June of 1771, prior to leaving her in the following winter.

In December 1777 he commissioned the new Romulus 44 in which he went out to the Mediterranean in June 1778 before sailing for North America at the end of the year. He participated in the expedition that captured Charleston on 11 May 1780, and commanded a small squadron consisting of the Blonde 32, Captain Andrew Barkley, the Delight 14, Commander John Inglis, and several smaller vessels in the Chesapeake that autumn. Whilst off the Chesapeake Capes on 19 February 1781 his command was captured by a division of the French fleet led by Captain Le Gardeur de Tilly, and consisting of the Eveill 64, Gentille 32 and Surveillante 32. Gayton was eventually exchanged for the American Commodore Abraham Whipple, who had been taken prisoner and given parole following the capture of Charleston, and he was acquitted of any blame for the loss of the Romulus at his court-martial on 26 September.

In May 1790 he commissioned the Royal William 90 as the flagship of Vice-Admiral Robert Roddam, based at Spithead, prior to her being paid off in September 1791. He then commanded the Royal William with the flag of Admiral Sir Peter Parker at Portsmouth from the beginning of hostilities with the French Republic in early 1793 through to the following year.

He married firstly Mary Hunt, and after her death, Anna Maria Palmer on 27 October 1787 at Hambledon.

Vice-Admiral Alexander Fraser was a prot g of his.