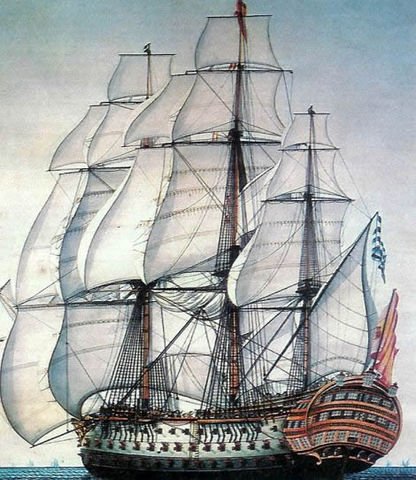 Berkeley’s career was defined by the controversy over his unsuccessful pursuit of the disabled Santisima Trinidad following the Battle of St. Vincent in 1797.

1754-1804. He was born on 1 October 1754, being one of six sons, two of whom died in infancy, of Lionel Spencer Berkeley, and of his wife, Margaret Whitfield of Twickenham, Middlesex. He was a distant relative of the Earl of Berkeley, and of Velters Cornewall, the M.P for Herefordshire from 1722-68.

Berkeley was commissioned lieutenant on 5 December 1773, and in April 1780 he commissioned the cutter Liberty 14 for service in the North Sea, retaining her for two years. He was promoted commander on 5 October 1782.

In June 1783 he recommissioned the Cygnet 14, leaving her a couple of months later to exchange with Commander William Taylor of the Falcon 14, which vessel he commanded in the Leeward Islands from 1784 until March 1786. He then returned to England in command of the Latona 38 in place of the alcoholic Captain Charles Sandys, who had been invalided home. The frigate was paid off in October.

Berkeley was posted captain with seniority from 21 September 1790 whilst commanding the Fury 16 at the time of the Spanish Armament, during which period of alarm he was employed off Cadiz to keep watch on the Spanish fleet before personally reporting back to the Admiralty in early October.

In early 1793, following the commencement of the French Revolutionary War, he commanded a squadron of gunboats in the defence of the Dutch canals against the French army of General Charles François Dumouriez, for which service he received a gold medal from the Prince of Orange. He then joined the Assurance 44, which had been recommissioned in April, going out to the Mediterranean in February 1794 before departing to join Vice-Admiral Sir John Jervis’ Leeward Islands campaign. In April Lieutenant Charles Ogle was appointed acting-captain of the Assurance and it would appear that Berkeley returned home.

In August 1795 Berkeley commissioned the new Emerald 36 which was manned in October by the crew of the Juno 32, a frigate that had just returned from the Mediterranean under Captain Lord Amelius Beauclerk. After joining the Mediterranean fleet at Lisbon in early 1797 he was despatched by Jervis with three frigates and two sloops to try and effect the capture of the disabled Sant sima Trinidad 130, following the Battle of St. Vincent on 14 February. Sighting her on the 20th, Berkeley unaccountably failed to bring her to action, for which failure he was criticised by newspapers and commentators amidst rumours that he would be brought to a court martial, although in the event Jervis did not pursue the matter.

Continuing with the Emerald, on 26 April 1797 Berkeley joined the Irresistible 74, Captain George Martin, in the pursuit of the Spanish frigates Ninfa 34 and Santa Elena 34 into Conil Bay, near Cadiz. After a ninety-minute action the enemy s surrender was achieved, although the Santa Elena then ran herself ashore and later sunk. Unfortunately for the British ships the Spanish frigates had already unloaded a significant amount of treasure into fishing boats prior to the action, so the possibility of earning a huge amount of prize money was denied them. Shortly afterwards Berkeley resigned the command of the Emerald as a result of the criticism regarding the Sant sima Trinidad affair.

From February 1801 he commanded the captured French sail of the line G n reux 74, in which he returned to Portsmouth from Gibraltar on 27 July 1802 to be paid off in the following month.

Captain Berkeley died in April 1804 at his lodgings in Oxford.