1739-1820. He was born in Liverpool on 31 January 1739, the third son of Charles Caldwell, a solicitor to the Customs in Dublin, and of his wife Elizabeth Heywood.

In 1753 Caldwell entered the Royal Naval Academy at Portsmouth, and in 1756 joined the Isis 50, Captain Edward Wheeler, serving in the Channel. In 1759 he moved to the Namur 90, Captain Matthew Buckle, which was the flagship of Admiral Hon. Edward Boscawen, and in which ship he fought at the Battles of Lagos Bay on 18 August and Quiberon Bay on 20 November. Having been commissioned lieutenant on 20 March 1760 he joined the Achilles 60, Captain Hon. Samuel Barrington, employed in North America and off France.

On 24 May 1762 he was promoted commander of the sloop Martin 14, attached to Admiral Sir Edward Hawke’s fleet in June, in which vessel he left the Downs at the end of July with a convoy for Portugal. At the beginning of August he brought into Portsmouth the Nuestra Senora del Carmen from San Domingo, the prize of the Shannon 28, Captain Richard Braithwaite, and he captured the Boulogne privateer cutter Hercule off Cap le Hogue on 2 November. In March 1763 he was ordered to Plymouth to collect transports that were to re-embark troops at Belle-Isle, and in September he sailed for Africa and from there to the Leeward Islands. 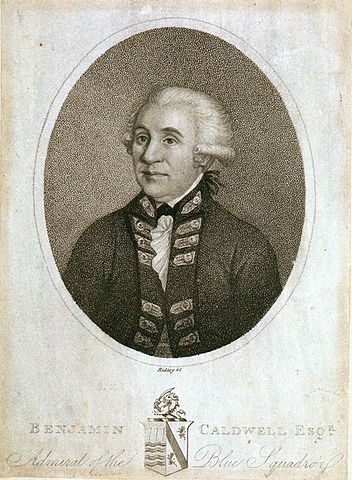 Caldwell was posted captain of the Milford 28 in the Leeward Islands on 1 April 1765, this promotion being confirmed by the Admiralty on 5 June 1766, and after returning home the frigate was paid off in October. He afterwards commanded the Rose 20 from April 1768 until late 1771, sailing for North America in the late summer, delivering Governor William Shirley to the Bahamas in January 1769, and seeing service at Boston.

In November 1775 he recommissioned the Emerald 32 at Chatham, going out to North America in the following May and commanding a division of boats in the landings on Long Island during the New York campaign of July – October 1776. Later that year the Emerald took up station near the rebel forts in the Hudson River. In the early months of 1777 he captured some twenty or so rebel vessels during a cruise, and after leading a small squadron off the Virginia Capes in the summer he participated in the Philadelphia campaign from August to November.

By January 1778 the Emerald was cruising in Chesapeake Bay, and on 31 March she effected the capture of the disabled rebel frigate Virginia 28 off Hampton, Virginia, which vessel was bought into the service. On 24 May she escorted a French frigate, named locally at the time as the Sirene 26, into New York on the suspicion that she was carrying military stores for the rebels. The Emerald later assisted at the evacuation of Philadelphia in June, and after arriving at Falmouth with the Jamaica convoy at the end of May 1779 Caldwell went on half-pay for a few months.

On Christmas Day 1779 he was appointed to the new Hannibal 50, which vessel arrived at Spithead to be copper-sheathed in early January 1780 before leaving St. Helens for St. Helena towards the end of March with three East Indiamen and a brig engaged in the southern fisheries. She then departed from St. Helena on 5 November to arrive at Crookhaven, Ireland in January 1781 with a particularly valuable homeward bound East India fleet, being in the company of three sail of the line that had left India with the convoy in the previous April, these being the Belleisle 64, Captain Robert Barbor, Asia 64, Captain George Vandeput, and Rippon 60, Captain John Blankett, which vessel flew the flag of Rear-Admiral Sir Edward Vernon, together with the Prothee 64, Captain Charles Buckner, which had been with the Hannibal at St. Helena. The convoy then proceeded to the Downs to arrive on 9 February.

In March 1781 Caldwell commissioned the brand new Agamemnon 64, which was launched at Bucklers Hard in early April and went round to Portsmouth to be copper-bottomed, although she could not go to sea until July for want of men. She finally left Spithead in August with the Quebec convoy but fell in with the allied fleet of forty-seven ships off the Lizard on 30 August, and instead took news of their whereabouts to Plymouth. Serving thereafter in the Channel fleet’s campaign of June to November the Agamemnon formed part of Rear-Admiral Richard Kempenfelt’s squadron which on 12 December outwitted a French fleet and attacked its convoy in the Bay of Biscay, Caldwell’s command picking up five prizes in the aftermath.

After sailing out to the Leeward Islands with a convoy in February 1782 he was despatched in company with the Magnificent 74, Captain Robert Linzee, to monitor the French fleet at Martinique, and on 8 April sent news of their sailing from that island to Admiral Sir George Rodney at St. Lucia. The Agamemnon performed well in the resulting Battle of the Saintes on 12 April, at a cost of fourteen men killed and twenty-two wounded. Following the battle she sailed under the orders of Rear-Admiral Sir Samuel Hood to North America before returning to Barbados, and she was eventually paid off at Chatham on 16 June 1783, whereupon Caldwell lodged a complaint with the Navy Board as to her sea-worthiness.

During the peace he largely remained unemployed until the French Revolutionary War, bar a few months in command of the Alcide 74 during the Dutch armament from October 1787, following which he temporarily assumed the chief command at Portsmouth in early February 1788 when Vice-Admiral Lord Hood departed for London to attend parliament. He later had the Berwick 74 from August to December 1790 during the Spanish Armament. 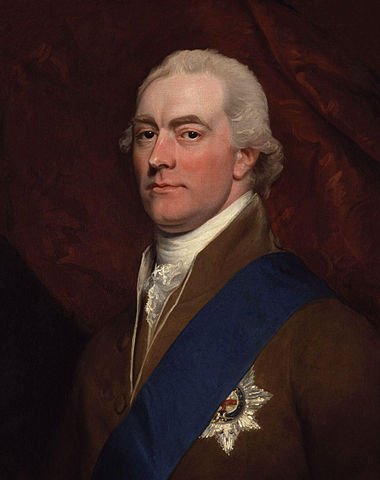 The new first lord of the Admiralty, Earl Spencer, ordered Caldwell’s recall from the Leeward Islands in 1795 amidst concerns over his management of the fleet.

On 1 February 1793 Caldwell was promoted rear-admiral, and he hoisted his flag at Spithead on 20 September aboard the Cumberland 74, Captain Thomas Louis, serving in the Channel fleet in its cruise from October-December. In January 1794 he arrived at Portsmouth aboard the Impregnable 98, Captain George Westcott, which ship had been involved in the chase of five French frigates in the channel on 13 January, and he fought at the Battle of the Glorious First of June, where the Impregnable lost seven men killed and twenty-four wounded. It was considered that the Impregnable fought the enemy from too far to windward, and Caldwell was the only one of the seven admirals not to be mentioned in Lord Howe’s letter and thus, to his immense dissatisfaction, was overlooked for a gold medal.

After being promoted vice-admiral on 4 July 1794 he sailed out of Plymouth on 13 October for the Leeward Islands with his flag aboard the Majestic 74, Captain Westcott, taking reinforcements of three other sail of the line to join the expedition under Vice-Admiral Sir John Jervis and General Sir Charles Grey which had been struggling to retain its conquests of Guadeloupe and St. Lucia. Not long after his arrival at Martinique on 14 November Jervis and Grey returned home and Caldwell assumed the chief command of the station, but unfortunately troop reinforcements form Gibraltar did not arrive at Martinique until January 1795, by which time the French on Guadeloupe had completed their re-conquest of the island and received their own reinforcements.

There followed for Caldwell a most unhappy six months, for soon letters were arriving in England with reports of his mismanagement of the Leeward Islands fleet, and advising that the inferior French were able to run rings around him. In February Earl Spencer, who had recently taken on the role of first lord of the Admiralty, ordered Caldwell’s recall, a decision that appeared to be fully vindicated when the West India merchants also complained of his service. Upon eventually being relieved by Admiral Sir John Laforey in June he returned to Portsmouth aboard the frigate Blanche 32, Captain Charles Sawyer, to arrive at the end of July and head straight for the Admiralty with news of the loss of St. Lucia and concerns over the fate of Grenada. Believing that he had been slighted once more, he made no further request for employment but asked for an inquiry into the merchants’ complaints, although as a result of his removal the latter were happy to desist. Perhaps the most damning condemnation of his period in the Leeward Islands came with the assertion of the French Republican commander-in-chief, Victor Hugues, that he could have achieved more conquests of British territories had Caldwell remained in command.

On 14 February 1799 Caldwell was promoted admiral, and he participated in an official capacity at Vice-Admiral Lord Nelson’s funeral on 9 January 1806. He again failed to win honours at the end of the war in 1815 and was only belatedly rewarded by being nominated a G.C.B. in May 1820. Somewhat embittered, he died at his son’s home, Farleigh House, near Basingstoke on 1 November that year, being junior in rank to only the Duke of Clarence and the Earl of St. Vincent.

On 7 June 1784 he married Charlotte, the daughter of Admiral Henry Osborn, who died at their residence in Charles Street, Berkeley Square on 20 September 1819. Earlier in that decade they had lived at 28 Barnes Terrace in Barnes, whilst in the 1780’s they had lived in Southampton, and in 1803 had let out an estate on the west side of Marlborough Street. They had one son, Charles Andrew.

Caldwell was not regarded as a particularly brilliant officer.