1745-1818. Of Scottish descent, he was born on 2 July 1745, the fourth and younger son of Sir James Calder Bt. a gentleman-usher to the queen of George II, and of Alice, daughter of Rear-Admiral Robert Hughes. The family originated from Muirton, Kinloss, near Elgin in Morayshire, but re-located to Kent. He was the younger brother of Major-General Sir Harry Calder, and a distant relation of Admiral Sir Richard Hughes and of Captain James Sayer.

Following an education at Maidstone, Calder entered the navy in 1757 aboard the Nassau 70 commanded by Captain James Sayer, which having gone out to North America was driven back across the Atlantic from Louisburg by a ferocious storm that left her dismasted and in danger of sinking. He saw action off West Africa in the following year and was severely wounded during the capture of Goree in 1759. The Nassau then proceeded to the West Indies where Calder witnessed the capture of Guadeloupe in the same year. After a brief spell aboard the Superb 74, Captain Joshua Rowley, he again saw service in the Leeward Islands aboard the Dublin 74, Commodore Sir James Douglas, who was the commander-in-chief on that station. Having been present at the capture of Dominica in 1761 and Martinique in 1762 he was commissioned lieutenant on 31 August 1762.

During 1766 Calder was employed aboard the Essex 64, Captain Hon. George Faulkner, serving in the West Indies, and from 1767-9 he commanded the schooner Magdalen 6 off North America. 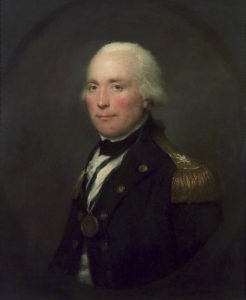 By 1777 he was a lieutenant aboard the Terrible 74, Captain Sir Richard Bickerton, and having been taken aboard Admiral Hon. Augustus Keppel s Channel fleet flagship Victory 100, Captain Jonathan Faulknor, he was present at the Battle of Ushant on 27 July 1778.

On 27 August 1779 Calder was promoted commander of the fireship Lightning 14, seeing service with the Channel fleet, and on 27 August 1780 he was posted captain of the Buffalo 60 in which he participated in the Channel fleet campaign which ran from June-December, thereafter retaining her through to the following year. In 1782 he commanded the Diana 32 in the Channel fleet, being present at the relief of Gibraltar on 18 October, and in December of that year he commissioned the new Thalia 36 for service in home waters, this vessel being paid off in April 1783.

He thereafter remained unemployed through the early years of the peace until accepting the command of the Barfleur 90 as flag-captain to Vice-Admiral Robert Roddam at Portsmouth from 1789-90, and then commanding the same vessel during the Spanish Armament of 1790 as flag-captain to Admiral Hon. Samuel Barrington, followed by Rear-Admiral Sir John Jervis. Shortly afterwards he removed to the Stately 64, which vessel was paid off at the end of the dispute with Spain. From August 1791 through to the following year he commanded the Portsmouth guardship Duke 98 as flag captain to Vice-Admiral Robert Roddam.

At the outbreak of the French Revolutionary War in 1793 Calder commissioned the new Theseus 74 for service in the Channel, although during the campaign that culminated in the Battle of the Glorious First of June in 1794 he was attached to Rear-Admiral George Montagu s squadron and so was unfortunate to miss the action. He went out to the Leeward Islands in October 1794 and remained with the Theseus until the early autumn of 1795.

In late 1795 he became captain of the Mediterranean fleet to Admiral Sir John Jervis aboard the Victory 100, Captain Hon George Grey, and following the Battle of St. Vincent on 14 February 1797 he was granted the honour of carrying home Jervis despatches aboard the Lively 32, Captain Lord Garlies. For this service he was knighted on 3 March. It was believed that he assisted Jervis in the writing of the victorious despatch, and that he had wished to downplay Commodore Horatio Nelson s celebrated part in the victory due to the dangerous precedent it would set of allowing individual officers to disobey orders in battle. He had in fact disapproved of the commodore s manoeuvre during the battle and had urged Jervis to recall both the Captain 74 and the Culloden 74. In discussing the battle with the King he also declared that Captain Cuthbert Collingwood of the Excellent 74 had been the real hero of the hour.

Calder continued as captain of the fleet to St. Vincent aboard the Ville de Paris 112 into 1798, and on 22 August, by which time he had been succeeded by Captain Hon. George Grey, he was created a baronet as Sir Robert Calder of Southwick, Hampshire. On 14 February 1799 he was promoted rear-admiral, and in August 1800 he raised his flag aboard the Prince of Wales 98, Captain William Prowse, serving in the Channel fleet under the Earl of St. Vincent.

In February 1801 he was despatched with seven sail of the line and two frigates to chase Rear-Admiral Ganteaume s squadron of seven sail of the line and two frigates which had slipped the blockade. Unfortunately he decided to search for the French in the West Indies, being unaware that the enemy had actually made for the Mediterranean where they cruised from January to July, and he only learned of his wasted journey upon reaching Jamaica in April. Here he became engaged in a dispute over prize-money with the local commander-in-chief, Rear-Admiral John Duckworth, although the argument was later settled in Calder s favour. Taking passage aboard the Thunderer 74, Captain Henry Vansittart, Calder eventually rejoined the Channel fleet in June where he remained until the peace.

On the resumption of hostilities in 1803 Calder commanded the blockading squadron off Ferrol where five French sail of the line had fled, again flying his flag aboard the Prince of Wales 98, Captain William Cuming. He was replaced by Commodore Sir Edward Pellew in September, and on 23 April 1804 was promoted vice-admiral, having rejoined the Channel fleet off Brest. In February of the following year he was sent to Ferrol with five sail of the line to watch over an allied squadron of twelve after Rear-Admiral Hon. Alexander Cochrane had departed that station in pursuit of the Rochefort squadron which had broken out on 11 January 1805. However, although Calder s command was never to exceed ten sail of the line the superior allied squadron refused to put to sea. 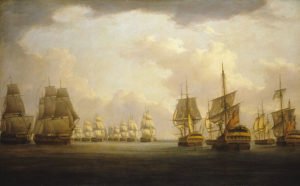 The Battle of Finisterre 1805

Following Vice-Admiral Pierre Villeneuve s breakout from Toulon on 29 March 1805 Calder was joined by the unemployed Rochefort squadron, and with a fleet of fifteen ships he received orders on 15 July to intercept the allied fleet of twenty on its return from the West Indies. The enemy fleets met on 22 July off Cape Finisterre, but although two Spanish ships of the line were captured the battle was indecisive, largely because of the foggy conditions and Calder s concern that the allied ships at Ferrol would come out in support of his already superior enemy. British casualties in the engagement totalled forty-one men killed and one hundred and sixty-two wounded. Calder s fleet thereafter united with the Channel fleet off Brest, but he was detached once more by Admiral Hon. William Cornwallis with eighteen sail of the line on 17 August, and twelve days later he joined Vice-Admiral Cuthbert Collingwood in the blockade of Villeneuve s fleet in Cadiz.

Shortly afterwards Calder, who believed that he had done very well at the Battle of Finisterre, was greatly surprised to find that he had been admonished in the newspapers for his failure to comprehensively defeat Villeneuve s fleet. He applied for a court martial, whilst at the same his new commander-in-chief, Vice-Admiral Lord Nelson, was ordered to send him home to face a board of inquiry. Although Calder had never been on good terms with Nelson prior to this personal misfortune he was nevertheless allowed by his rival to sail back to England for the court-martial aboard his flagship, notwithstanding the fact that he was only allowed to depart after the arrival of the Royal Sovereign off Cadiz on 8 October. The court martial sat on 23 December, and three days later it found Calder guilty of an error of judgement for which he was severely reprimanded.

He saw no more active service but on 31 July 1810 was promoted admiral, from 1810-13 was commander-in-chief at Plymouth with his flag aboard the Salvador del Mundo 112, Captain James Nash, and on 2 January 1815 he was created a K.C.B.

He married Amelia Michell of Norfolk in 1779 but had no children. His wife had a great knowledge of the service and delighted in taking her small sailing boat to sea in all weathers, but by the time of Calder s death she was requiring constant care for a mental condition. During the 1790 s the couple lived at Southwick. Calder s sister Alithea was the second wife of Admiral Robert Roddam.

Attitudes to Calder s character differed. To some he was a brave and skilled if not particularly brilliant or intelligent officer, a fair, kindly, and sociable man who was liked by many in the service and admired by those who did not favour him. Many felt that he was unfairly castigated for his failure to complete an overwhelming victory at the Battle of Finisterre, and this was a view shared both by Captain Infernet of the Allied fleet who could not believe that the British admiral had been censured, and by subsequent historians. Others however, in particular the acolytes of Nelson who made up the bulk of the captains of the fleet off Cadiz in 1805, felt that he had performed badly. They regarded him as ruthless, selfish and ambitious, being irksome and too harsh with his officers even though it was considered that this was in their best interests and to that of the service as a whole. Cornwallis suggested that he was a prima donna and was known to be displeased when Calder wrote directly to the Admiralty whilst serving under him in 1804. Calder received much criticism for accepting Nelson s offer to take his flagship home prior to the Battle of Trafalgar, and was universally condemned for then writing to Lord Collingwood requesting a share of the head money earned in the battle. It was generally accepted that his veracity and quickness of speech was reflected in his decision-making.

Calder always required his officers to be in full uniform, and he made them take hats off when addressing him. His aristocratic demeanour won him few admirers, yet he was also described as personable and charming, a man who earned popularity through giving many dinners. His men were required to be silent when on duty, and he was renowned for keeping a smart, disciplined ship. That he cared for his crew s welfare was illustrated by an incident during one cruise when he landed his men on an island in Berehaven Bay near Bantry Bay in order for the smell of the earth to cure their ulcers. He made a fair amount of prize money during his career.