1755-95. Born in Lymington, Hampshire, where his father, William Rogers, was a businessman, he was the elder brother Rear-Admiral Thomas Rogers, and of Lieutenant James Rogers, 1769-94 who died of yellow fever in the Caribbean.

After an education in Wiltshire, Rogers entered the service in October 1771 aboard the Arethusa 36, Captain Andrew Snape Hamond, in which frigate he went out to North America. In 1775 he transferred with this officer to the Roebuck 44, serving on the same station. During March of the following year, whilst in command of a leaking prize which he had boarded with four men in appalling wintry conditions, his men and the original crew conspired to drive her ashore near Chesapeake Bay and Rogers was captured and held in trying circumstances in the interior by the Americans. After being detained for about a year he escaped his captors with a small group of prisoners and was able to eventually rejoin his ship in the Delaware. The next eighteen months were spent on the coast in cutting-out expeditions whilst commanding several of the Roebuck s tenders, and on 19 October 1778, shortly after recovering from a life-threatening fever that accounted for up to forty of his shipmates, he was commissioned lieutenant.

In May 1779 Rogers commanded the Haarlem 14 in Commodore Sir George Collier s expedition to Virginia, but on 16 July this vessel was chased ashore by American privateers and he was again taken prisoner. After being released he commanded a small vessel, the Fury, in the successful attack on Charleston on 11 May 1780, where taking to a canoe in the dead of night he gallantly cut away the boom to allow the British ships into the harbour.

On 2 December Rogers was promoted commander of the prize sloop General Monk, which had been the American General Washington of 18 guns, manning it with a crew of one hundred and ten officers and hands. Over the next eighteen months he captured upwards of sixty enemy vessels, the prize money for which later allowed him to purchase the estate of St. Austin s in Boldre, near Lymington, from Captain Hamond. However, on 8 April 1782 he was badly wounded in the foot and captured once more during a thirty minute engagement with the well-manned privateer Hyder Ali 18 of Cape May, an action which saw his lieutenant and sailing master slain in addition to another seven men killed and twenty-nine wounded. He was again exchanged and returned to England in September after landing at Holyhead, but the wound consigned him to the use of crutches for two years and left him disabled for at least another five years thereafter. 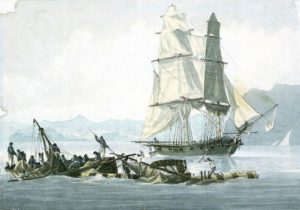 HMS Speedy was commanded by Captain Rogers after the peace of 1783. She is shown here in 1800 attending the wreck of the Queen Charlotte.

In May 1783 he commissioned the new Speedy 14 for service in the North Sea, being engaged in anti-smuggling operations off the Humber and impounding up to twenty ships before paying her off in January 1787. During this period he took a cottage in Great Yarmouth and was often visited by his friend, the future King William IV, whilst on one occasion he faced down a mob with a drawn sword when arresting a deserter. On 1 December 1787 he was posted captain by Lord Howe, the first lord of the Admiralty, it having been intended that he would become flag-captain to Rear-Admiral Sir John Jervis aboard the Hannibal 74 as a result of the Dutch Armament, and from the end of July 1790 to early December he served as flag-captain aboard the newly commissioned Prince 98 to Jervis during the Spanish Armament. Sadly in the same year he lost 2,000 of his fortune when his bank crashed.

Rogers commissioned the frigate Quebec 32 in June 1793 with a largely volunteer crew, and spent the next few months in the Downs squadron under the orders of Rear Admiral John MacBride, whose flag he briefly flew. Whilst serving off Dunkirk he was often sent ashore to liaise with the Duke of York at the head of a British army engaged in the Flanders Campaign, and he also landed with some fifty men to attempt the conveyance of arms into Nieuport when that town was besieged by a French army. Having succeeded in this task he then joined an attack upon the French positions. It had long been Rogers intention to join Vice-Admiral Sir John Jervis expedition to the Leeward Islands however, and when this officer demanded his services a dispute arose with Macbride who expressed some disappointment at losing such a brilliant officer. After Jervis entreaties to the prime minister, William Pitt, it was agreed to release Rogers and the Quebec to the West Indies.

He was subsequently active during the Leeward Islands campaign from 10 January 1794, taking nine prizes before the fleet left Barbados, and flying a commodore s broad pennant in command of a detached squadron of smaller vessels at the reduction of Martinique, much to the displeasure of more senior officers.. He then performed excellent duties ashore in command of seven hundred seamen, and in the construction and operation of a battery, but one of his most difficult tasks was in calming the passions of his men after the erratic Captain Robert Faulknor had inadvertently slain one of their number in a rage during March.

A week following the surrender of Martinique Rogers joined the expedition to take St. Lucia, receiving aboard the nominal head of the invasion force, Prince Edward, who was the future Duke of Kent and subsequently the father of Queen Victoria. When part of the French garrison bolted the conquest of the island was achieved without the loss of a single man to enemy fire. Rogers was then charged with the command of a small squadron that took the Islands of the Saintes in a night attack on 10 April 1794, and after rejoining Jervis off Guadeloupe he led a force of seamen ashore which again enjoyed a share in the easy conquest of that island.

The ever active and well-regarded Rogers was next placed in command of a squadron of four 44-gun vessels, five frigates, three sloops and a number of small vessels which were intended to co-operate with one thousand troops in the capture of the Dutch possession of Cayenne on the South American mainland. Again there was some disquiet at such a significant force being offered to a junior officer, but in the event a serious outbreak of yellow fever prior to the expedition s departure reduced the number of men available and it had to be abandoned.

By the middle of May the yellow fever had not only claimed the life of Rogers nephew but also that of his younger brother James, the Quebec s first lieutenant. Retaining his broad pennant, Rogers was despatched to North American waters to take command of five frigates and a sloop to counter French raids on British shipping, and to cover Bermuda. During the voyage north he nearly lost his own life when he was struck by a falling block that rendered him senseless, and when the Quebec reached her station she was unable to achieve anything of note as only one of the expected frigates, the Alarm 32, Captain James Carpenter, was able to join company. Further delays occurred in attempting to reach Halifax in the face of adverse winds, and almost immediately Rogers was recalled to the Leeward Islands to help counter the French resurgence on that station.

Rejoining the fleet before the end of October, the Quebec cruised off Guadeloupe which had been retaken by the French, but with his own health being poor Rogers received permission from the new commander-in-chief, Vice-Admiral Benjamin Caldwell, to return home. Prior to the Quebec s departure however, and whilst he was defending the island of Grenada from a slave uprising and preventing the French from entering George-Town, Rogers succumbed to yellow fever on 24 April 1795. He was buried in St. George s Churchyard on the island.

Both Admiral Earl of St. Vincent and Captain Sir Andrew Snape Hamond were influential in advancing his career and they both displayed great trust in his abilities, suggesting that had Rogers survived he would have enjoyed just as stellar a career as a senior officer as he had before his early death. He was a brave, resolute and creative officer who was renowned for his bold yet considered initiative, and for his excellent seamanship and adventurism. Described as a calm, mild and unimpassioned man who disliked but accepted swearing, he was an officer beloved by his men.

He did not favour any particular political faction but suffered in the early 1790 s through his professional association with the ultra-Whig, Sir John Jervis.