1737-1821. Baptised at Gosport on 8 November 1737, he was the son of Richard Bligh and of his wife, Anne Page. His father came from a family long established in Looe, Cornwall, and served as a lieutenant under his patron, Captain George Brydges Rodney. He was the uncle of Rear-Admiral John Bligh and a distant cousin of Admiral William Bligh. The future Admiral Lord Rodney became his godfather and was hugely instrumental in fostering his early career.

Bligh entered the Navy in 1750 aboard the Rainbow 44 commanded by Captain Rodney, and was aboard the flagship Ramillies 90, Captain Arthur Gardiner, at the Battle of Minorca on 20 May 1756 that led to the court-martial and execution of the unfortunate commander-in-chief, Vice-Admiral Hon. John Byng. On 30 September 1757 he was commissioned lieutenant of the Nightingale 24, Captain James Campbell, and on 22 October 1762 was promoted commander of the sloop Virgin 12 by Vice-Admiral Rodney, having gone out with his patron to the Leeward Islands. This vessel was paid off at Antigua on 11 May 1764, whereupon he remained unemployed for the next ten years.

In October 1774 he was appointed to the sloop Wasp 8, and he saw service out of Passage, County Cork, Ireland from the following month. In October 1775 he brought sixty volunteers from Ireland into Plymouth, and in June 1776 sailed from Portsmouth to Plymouth with money for the dockyard artificers. Towards the end of August, the Wasp arrived off the Devonshire port with ten transports bound for North America, and she then sailed for Ireland. Returning to Plymouth, she went out on a cruise in November and put into Falmouth in January 1777. By April she was preparing for convoy duty from Dublin, and she appears to have remained serving in the Irish Sea until the autumn.

Bligh was posted captain of the store ship Camel 24 on 6 December 1777, this advancement representing a considerable delay of fifteen years since his previous promotion. On 20 December he sailed from Portsmouth for Cork to collect the West Indies convoy, and his command departed for Jamaica from the Irish port on 25 January 1778 with sixty-eight merchantmen. Whilst in the West Indies he captured several French merchantmen, and the Camel returned home with the Jamaica convoy, passing Portsmouth for the Downs on 7 August 1779. Four days later she came back to Portsmouth, from where she sailed within a week for the Needles with several light transports which were to be sunk as block ships should the combined fleets of the enemy slip past the British fleet as it made its retreat up the Channel under Admiral Sir Charles Hardy. 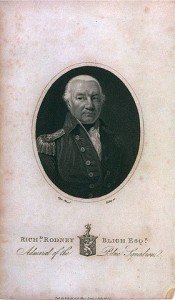 In September 1779 it was reported that the Camel was fitting out for foreign service, but instead she moved down to Spithead several weeks later and joined Commodore Charles Fielding’s squadron which controversially detained a Dutch convoy in the Channel on 31 December. Bligh next commissioned the newly built frigate Nemesis 28, which was launched in Liverpool on 23 January 1780, and eventually sailed from that port in June. By July she was in the Portland Roads with a convoy for Ireland, and whilst cruising on the latter station she chased a lugger privateer ashore in Slabbersludge Bay, near Bray Head. The Nemesis departed Dublin in early August with the trade for Bristol and London, and by 25 October she was at Portsmouth with another convoy for Ireland.

In early January 1781 it was reported that whilst off the French coast the Nemesis had captured a richly laden ship from Smyrna valued at one hundred thousand guineas, the modern-day value of this prize being £18m. She reached Plymouth shortly afterwards where she was required to perform quarantine in the Sound, and here her cable was almost shredded by a storm in February. On 13 March she arrived at Bligh’s old stamping ground of Passage in County Cork, and in April she convoyed a Liverpool privateer and her prize, a ship from Cap François, across to the mainland. During May the Irish press was critical of the capture of so many vessels by enemy privateers in the Irish Sea, and the Nemesis was accused of being ‘frozen by enchantment’ when two vessels were captured in Waterford Bay whilst she was lying there. Her reputation was somewhat restored when she captured the French privateer Alliance 18 off Waterford on 5 June, although a later twelve-hour chase of the privateer cutter Princess de Robeck 18 was unsuccessful, allowing that vessel to snatch a couple of merchant ships.

By 25 August 1781 the Nemesis was with the fleet at Spithead, having recently arrived from Ireland with a convoy, and she then went into harbour. At the end of September she sailed for Plymouth with money for the dockyard workers, from where she departed with the trade for Ireland. By 16 December she was at Milford Haven in Wales, and returning to Ireland she was off Waterford in February 1782 when she sprung her main-topmast during the chase of another privateer.

In April 1782 Bligh recommissioned the Asia 64 at Chatham, and once manned she sailed from the Nore for Spithead to join the Channel Fleet in July. During the following month she put out on a cruise with Commodore William Hotham’s squadron, and she was present at Admiral Lord Howe’s relief of Gibraltar on 18 October. She then sailed for Cork with Vice-Admiral Mark Milbanke’s six sail of the line in November, from where the squadron departed for Plymouth on the 13th. Although she was next under orders to join a reinforcement going out to the Leeward Islands, the Asia was still in Plymouth Sound during January 1783 and she arrived at Chatham to be put out of commission on 20 March.

At the commencement of the French Revolutionary war in February 1793 Bligh was initially destined to command the Excellent 74, but this appointment fell through and he had to wait until April 1794 to join the fifteen-year-old Alexander 74 at Chatham, being attached to the Channel fleet. He served under the orders of Rear-Admiral George Montagu during the campaign surrounding the Battle of the Glorious First of June in 1794 and thus did not share in that engagement. On 8 July the Alexander sailed out of Plymouth as part of Rear-Admiral Hon. William Cornwallis’s squadron of twelve sail of the line, and whilst temporarily flying the flag of Vice-Admiral Robert Kingsmill she brought an East India convoy of seventeen ships home form Galway in August, passing Portsmouth on the 26th. In September she was at Spithead, and going around to Plymouth she left that port on the 27th in the company of the Canada 74, Captain Charles Powell Hamilton, and with a convoy of transports and tenders destined for Gibraltar. 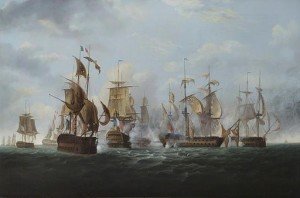 On 6 November 1794 whilst returning home in company with the Canada, the Alexander was attacked by five French 74’s and three heavy frigates under the flag of Rear-Admiral Joseph Marie Nielly. In order to allow the Canada time to escape Bligh decided to sacrifice the Alexander, and she was forced to strike her colours after being overwhelmed and almost totally wrecked. He was taken to Brest and held in Spartan if humane conditions aboard a prison hulk, whilst his men were apparently treated as little worse than dogs during their confinement. In the course of his imprisonment, he learned of his advancement to rear-admiral with seniority from 4 July 1794.

In May 1795 he was exchanged to the joy of his countrymen who applauded his arrival at Plymouth, his return being further celebrated by the recapture of the Alexander at the Battle of Groix in the following month. Following his honourable acquittal at the court martial on 27 May into the loss of the Alexander, Bligh raised his flag on 18 July under the orders of the port admiral, Sir Peter Parker, at Portsmouth aboard the Salisbury 50 which was fitting out for the command of Captain William Mitchell, in early August it was aboard the Tremendous 74, Captain John Aylmer, and in December he shifted from the Arab 16, Commander Stephen Seymour, to the Mercury 28, Captain Hon. George Byng,

In May 1796 Bligh was appointed the second-in-command to Rear-Admiral Sir Henry Harvey in the Leeward Islands, and at the beginning of June he hoisted his flag at Spithead aboard the Brunswick 74, Captain William Browell. At about the same time the Court of King’s Bench granted an attachment against him for contempt after he had threatened to attach a 32-pound ball to a messenger and throw him into the sea whilst he was attempting to deliver a writ of Habeas Corpus in respect of a man who had been allegedly impressed illegally. Shortly afterwards the attachment was withdrawn when Bligh complied with the writ.

On 11 August 1796 he sailed from St. Helens’ with his flag aboard the Brunswick in company with Vice-Admiral Sir Hyde Parker’s grand convoy, and after parting from his superior he continued south with the East India and West India trade. Upon reaching Martinique on 22 September, he received further orders to proceed to Jamaica and temporarily assume the chief command following the return home in ill health of Rear-Admiral William Parker, pending the arrival, in the event just one month later, of Vice-Admiral Sir Hyde Parker.

Thereafter Bligh served as second in command at Jamaica, and following Browell’s death in 1797 William Rutherford became his flag-captain. In March 1798 Parker reported from off Saint-Domingue that Bligh’s squadron had taken several schooner-rigged rowboats on the mole at Cape Nicolas Mole. Shortly afterwards six hundred men from his squadron under Captain William Henry Ricketts of the Magicienne 32 were landed to act in association with the troops and French Royalists against the slave army and the Republicans, and a number became casualties in the subsequent fighting.

On 7 February 1799, with his flag aboard Parker’s flagship the Queen 90, Captain Man Dobson, Bligh sailed from Port Royal with three other men-of-war on a cruise. Unfortunately, relations had never been easy with his superior, and they culminated in Bligh’s decision to pardon a seaman and a twelve-year-old boy who had participated in the bloody mutiny aboard the Hermione 32, Captain Hugh Pigot, on 22 September 1797. As a consequence he was ordered home by Parker, and he returned to Europe in October with a convoy of one hundred and thirteen West Indiamen with his flag aboard the Regulus 44, Captain George Eyre. Sadly, many of these vessels were lost when the fleet was overtaken by a ferocious storm.

Bligh had been promoted vice-admiral on 14 February 1799, and in November 1803 he arrived at Leith to undertake the position of commander-in-chief in the Firth of Forth under the overall orders of Admiral Lord Keith. Flying his flag aboard the Roebuck 44, Captain George M’Kinley, and from January 1804 the Glatton 56, Captain James Colnett, he retained this position until his promotion to the rank of admiral on 23 April 1804. Thereafter he did not serve again but participated in Vice-Admiral Lord Nelson’s funeral on 9 January 1806.

At the end of the Napoleonic War in 1815, Bligh’s fury at not having been nominated a K.C.B. or C.B., as had some eighty other officers, led to a polite, eloquent but palpably outraged correspondence with the first lord of the Admiralty. Small recompense came on 16 May 1820 with his nomination as a G.C.B.

Admiral Bligh died on 30 April 1821 at his home, Belle Vue, Southampton, and he was buried at Alverstoke.

He married firstly Ann Worsley of Gatcomb Park, Isle of Wight, by whom he had issue a son and four daughters. Their son, George Miller Bligh, died as a captain in 1835. Their second daughter, Ann Caroline, married Lieutenant-Colonel Driffield of the Marines in June 1799, whilst Maria, the youngest daughter, was married to the future Vice-Admiral Charles Carter. Their third daughter, Elizabeth, married the future Admiral Shuldham Peard in December 1791, but this marriage ended in divorce in 1799 when upon his coming home from service she gave birth to a daughter five months later! Meanwhile, following his first wife’s death in July 1797 at the age of fifty-three, Bligh married fifty-five-year-old Mary Golighty of Ham Common, Surrey, on 28 June 1800 at Kingston

Bligh was a zealous officer who attended fully and quietly to his duty and was of an uncomplicated if blunt disposition. He was apparently open, honest, robust, and vigorous, was respected by his contemporaries, and was solicitous to his officers and men.