Having been commissioned lieutenant on 20 December 1777, Bertie served at the Battle of Ushant on 27 July 1778 as first lieutenant of the repeating frigate Fox 28, Captain Hon. Thomas Windsor. On 10 September the Fox was captured by the Junon 32, and Bertie became a prisoner of war prior to returning to England in the following January. Almost immediately he gave evidence at the politically charged court-martials upon Admiral Hon. Augustus Keppel and Vice-Admiral Sir Hugh Palliser with great favour to the former, and at an apparent detriment to his career. Even so, he was promoted commander on 3 June 1780, and he had the Merlin 18 from May 1781.

On the change of the government, he was posted captain of the frigate Crocodile 24 on 21 March 1782, and serving in the Channel he fought an inconclusive action with the privateer Prince de Robecq 28 on 25 April. He removed to the Recovery 32 shortly afterwards, which frigate he commanded at the Relief of Gibraltar on 18 October 1782, and which was eventually paid off in the ensuing spring.

Bertie briefly recommissioned the Nymphe 36 in the Dutch Armament during October 1787, paying her off two months later, and in May 1790 he commissioned the frigate Latona 38 to be paid off at the end of the year, having been attached to the Grand Fleet during the Spanish Armament. From August 1791 he captained the thirteen-year-old Edgar 74 as a guardship at Portsmouth, and during the same year he sat on the Bounty court-martial, one of the accused from the mutiny of 28 April 1789 being his kinsman, Midshipman Peter Heywood. 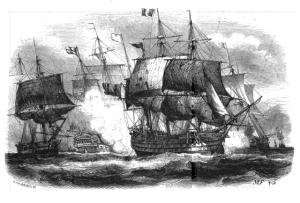 He retained the Edgar at the commencement of the French Revolutionary War and took the East India convoy out to Cape Finisterre under the orders of Rear-Admiral John Gell during April 1793, thereby sharing in the capture of the French privateer General Dumourier and her exceedingly rich Spanish prize, the St. Jago on 14 April, for which he was reported as receiving £56,000, or £8m in today’s money. He then participated in the Channel fleet cruise during July – August.

On 26 February 1794 he was appointed to the newly commissioned Thunderer 74 which fought at the Battle of the Glorious First of June. His ship was the only one of the fleet not to suffer a single casualty and at one point, when it was considered that she was engaging from too far to windward, he suffered the ignominy of being ordered to close with the enemy by Admiral Thomas Graves. In 1795 the Thunderer joined Commodore Sir John Borlase Warren’s expedition ferrying French Royalist forces to Quiberon Bay, but although she was detached when this officer learned of the French fleet being at sea, she arrived too late to participate in the Battle of Groix on 23 June 1795. After returning to the French Royalist expedition Bertie led four gunboats up the River Vannes to destroy a sloop and a cutter, and following a spell in the Bay of Biscay under the promoted Rear-Admiral Sir John Borlase Warren he left the Thunderer in March 1796.

He commissioned another new ship in August 1798, the Renown 74, serving in the Channel and being present under the orders of Rear-Admiral Charles Morice Pole in the blockade of five Spanish sail of the line at Rochefort during the campaign caused by the Brest fleet’s breakout on 25 April 1799. From the end of the year, he commanded the Windsor Castle 98 in home waters, briefly carrying the flag of Rear-Admiral Sir Charles Cotton that winter before leaving her in the following summer. During May 1801 he commissioned the captured Guillaume Tell as the Malta 80, serving in the Channel and then Bantry Bay until April 1802 when she was paid off at Plymouth after suffering a dangerous fire whilst guarding the entrance to Portsmouth Harbour off St. Helens. His calmness and sagacity in persuading the crew to remain aboard and prevent the blaze from reaching her magazine earned him great credit.

After the resumption of hostilities in 1803 Bertie had the Windsor Castle 98 once more at Portsmouth. He was promoted rear-admiral on 23 April 1804 and flew his flag off Ireland and in the Channel from May to November 1807 aboard the Foudroyant 80, Captain Norborne Thompson, and from the latter month to May 1808 in the Channel aboard the Bellerophon 74, Captain Edward Rotheram.

He was further advanced to the rank of vice-admiral on 28 April 1808 and subsequently appointed commander-in-chief at the Cape, going out a month later in the Leopard 50, Captain James Johnstone, and arriving in August. His flag remained on this vessel until March 1810 when it was removed to the Boadicea 38, Captain Josias Rowley, and later in 1810 he hoisted it aboard the Africaine 38, Acting-Captain Charles Gordon. During this period, he convened the court-martial of Captain Robert Corbet at that officer’s request on 3 February 1809 following complaints of cruelty from the crew.

Towards the end of the year, he controversially assumed command of the forces at the lucrative capture of Mauritius, taking advantage of the fact that the French had already been weakened by Commodore Rowley’s brilliant campaigning from July. By the time of his arrival the choice of a landing site had already been decided, and it was understood that the enemy forces could barely provide any resistance. To make matters worse Mauritius was beyond the limits of his authority, and in taking command he superseded Vice-Admiral William O’Brien Drury, the commander-in-chief in the East Indies station, who had masterminded the whole operation. Not surprisingly Drury considered himself to be ‘insulted and injured’ and upon Bertie’s return to the Cape he found himself recalled to England, his fragile reputation having been further damaged by a dispute with the local commissioner of the navy.

Bertie’s request for a court martial into his conduct was disdainfully rejected by the Admiralty but within a year, following another change of government, he found himself back in favour with his elevation to a baronetcy on 9 December 1812. Even so he was never employed again, and instead retired to his estate at Donnington, Berkshire. By then he had at least redeemed some credit by his advocating of a baronetcy for the deserving Rowley.

He married Emma Heywood of Maristow, Devon, on 1 July 1783 and had two daughters and a son, Lyndsey-James, who entered the Army. His wife died in March 1805. His nephew, Captain Bertie Cornelius Cator, the son of his illegitimate sister, was born in 1787, served with him at the Cape, and was posted captain in 1814.

Bertie was related to the Heywood family, which no doubt was of some significance in the pardoning of young Peter Heywood when Bertie sat on the court martial into the loss of the Bounty. He was also a friend of Vice-Admiral Lord Nelson. He was regarded as benevolent, but his reputation suffered greatly as a result of his avaricious behaviour at Mauritius.