Having been entered into the books of the Niger 32, Captain Francis Banks, in 1770, Murray went to sea two years later aboard the Panther 60, Captain Cornthwaite Ommanney, flying the broad pennant of Commodore Molyneux Shuldham on the Newfoundland station. He apparently served aboard the Romney 50, Captain Elliot Salter, the flagship of Rear-Admiral John Montagu on the same station from 1776, but if so this must have been a brief posting for he was aboard the Bristol 50, Captain John Morris, the pennant ship of Commodore Sir Peter Parker, at the attack on Sullivan s Island on 28 June 1776. In the following month he removed with Parker to the Chatham 50, Captain Tobias Caulfield, serving at the capture of Rhode Island on 8 December.

By the start of 1778 Murray had moved to the Eagle 64, Captain Roger Curtis, flying the flag of the commander-in-chief in North America, Vice-Admiral Lord Howe, based initially at Philadelphia before serving in the campaign against the French fleet at New York in July 1778 and Rhode Island in August. He returned to England with Howe aboard the Eagle in October of that year. 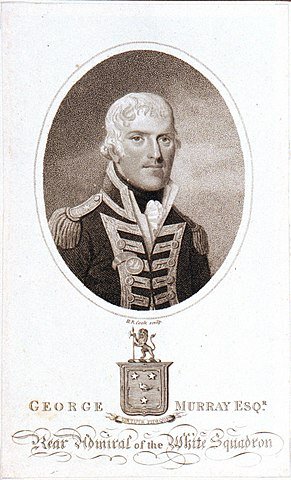 After passing for lieutenant in England on 19 November 1778 Murray was appointed to the Arethusa 32, Captain Charles Everitt, with a commission dated 31 December. On 19 March 1779 the Arethusa was wrecked on the Breton shore whilst in pursuit of a French frigate and Murray became a prisoner of war. Within two years he was released on parole, apparently due to a French officer s approval of his honourable behaviour in the chastisement and beating of an American privateer who had cheekily worn an English naval uniform with a royal cockade in his hat to impress a young woman. If Murray s release was somewhat bizarre and fortunate it was probably deserved, for he had not wasted his time in imprisonment but had engaged in a thorough study of the French language and her navy.

After being exchanged in early 1781 he joined the Monmouth 64, commanded by a fellow native of Chichester, Captain James Alms, which ship was attached to Commodore George Johnstone s squadron that departed in March to attempt the conquest of the Cape from the Dutch. Accordingly Murray found himself serving at the Battle of Porto Praya on 16 April and at the capture of the Dutch merchantmen in Saldanha Bay, following which the Monmouth was forwarded by Johnstone to the East Indies station.

During 1782 the Monmouth was present in Vice-Admiral Sir Edward Hughes battles with the Balli de Suffren off Sadras on 17 February and Providien on 12 April. Murray then joined Hughes flagship Superb 74, and was wounded at the Battle of Trincomale of 3 September. Promoted commander of the fireship Combustion on 9 October, he was posted captain of the San Carlos 20 three days later on 12 October. Following the fifth battle between Hughes and Suffren off Cuddalore on 20 June 1783 Murray moved to the Inflexible 74, in which he returned to England to be paid off in June 1784.

During the peace Murray resided for a further period in France, where he advanced his study of both her language and literature. He returned to duty in the Spanish Armament of 1790 when he commanded the frigate Triton 28 from June. Retaining her thereafter, he surveyed the Great Belt in 1791 before going out to Quebec and Halifax, and in September to Jamaica.

By the time that the Triton returned home in June 1793 Britain was at war with France, but Murray remained out of employment until he joined the twelve-pounder frigate Nymphe 36 during the following January in succession to the hugely successful Captain Sir Edward Pellew. He was with Commodore Sir John Borlase Warren s squadron on 23 April 1794 when it captured two French frigates and a corvette and drove another frigate into Morlaix, although the Nymphe was unable to play any great part in the action. In June 1795 she joined Admiral Lord Bridport s fleet and was present at the Battle of Groix on 23 June.

After returning to Plymouth from Quiberon Bay towards the end of August 1795 in the company of the Irresistible74, Captain Richard Grindall, Murray was reportedly appointed to that vessel, although if he did assume this command it was only for a very short time. From the autumn he spent a long period in temporary command of the Formidable 90 for Captain Hon. George Berkeley who was away on parliamentary business, flying the flag of Rear-Admiral Sir Roger Curtis in the Channel Fleet from the spring of 1796 until October of that year.

Towards the end of 1796 Murray moved to the Colossus 74 in which he went out to join the Mediterranean fleet with Rear-Admiral William Parker s reinforcements. This vessel fought at the Battle of Cape St. Vincent on 14 February 1797 where she had to be rescued by the Orion 74, Captain Sir James Saumarez, after suffering a partial disablement in an engagement with a Spanish three-decker. During the battle the Colossus suffered casualties of five men wounded.

After serving off Cadiz in command of the inshore squadron, in which capacity he declined an invitation to a bullfight from the local Spanish admiral, Murray was at Malta with the Colossus in October 1798, and upon joining Rear-Admiral Lord Nelson at Naples he was ordered to convey home the fleet s invalids and the massive art collection that had been compiled by the British ambassador, Sir William Hamilton. Unhappily a third of the diplomat s booty was lost on 10 December 1798 when the barely serviceable Colossus was wrecked on a ledge of rocks in St. Mary s Roads in the Scilly Isles, suffering the loss of one life in the process. Murray was acquitted of any blame for this disaster at a court-martial held on 19 January 1799.

Within a few weeks he was appointed to the Achille 74 in the Channel, but he suffered more ill-fortune on 13 June 1799 when she ran aboard the Caesar 80, Captain Sir James Saumarez, off Plymouth. The Achille later served at the blockade of Cadiz.

In February 1801 Murray exchanged with Captain Edward Buller into the crack Edgar 74, and on 2 April led the line at the Battle of Copenhagen, this honour having been granted him by Admiral Sir Hyde Parker because of the survey work he had done on the approaches to Copenhagen ten years earlier. During the battle his ship suffered the enormous casualties of thirty-one men killed and one hundred and eleven wounded. In the aftermath of the engagement he hoisted a commodore s broad pennant aboard the recalled Admiral Parker s flagship London 98, commanding seven sail of the line off Bornholm whilst Vice-Admiral Lord Nelson took the rest of the fleet to Revel. Having officially left the Edgar in August he was then back in England to sit on the court-martial into the loss of the Hannibal 74 at the Battle of Algeciras on 1 September, but otherwise remained out of employment throughout the last months of the French Revolutionary War and the ensuing peace.

Murray led the fleet at the Battle of Copenhagen in 1801

In April 1803, following the resumption of hostilities with France, Murray was initially appointed to commission the new Spartiate 74, but almost immediately he was asked to undertake the role of captain of the fleet to Vice-Admiral Lord Nelson in the Mediterranean. Initially he refused the appointment as he believed that it would put their friendship in jeopardy, but Nelson s reassurances persuaded him to accept the role. He was promoted rear-admiral on 23 April 1804, and was with the fleet when it chased the French to the West Indies following the breakout from Toulon on 29 March 1805. When the Victory returned to England he went ashore in August to assume the role of executor to his father-in-law s estate, and he thus missed participating in the Battle of Trafalgar. It said much for his reputation that Nelson did not replace him in the role of captain of the fleet, as he claimed that none but Murray would do .

In October 1806 it was announced that he was to raise his flag at Portsmouth aboard the Polyphemus 64, Captain Peter Heywood, and was to take command of an expeditionary force congregating at Falmouth in place of the convalescing Commodore Sir Samuel Hood, who was seeking an election to parliament. It soon became clear that this force, in company with an army under Brigadier-General Robert Crauford, was bound for the River Plate in South America. After remaining wind-bound at St. Helens for many weeks, and twice sailing but being forced back by contrary gales, Murray finally got away at the beginning of January 1807, by which time the army transports had sailed from Falmouth. In July 1807 he eventually superseded Rear-Admiral Charles Stirling in South America, and it was hoped that he and Crauford would be able to make capital out of Commodore Sir Home Riggs Popham s adventurous foray against Buenos Aires and the capture of Montevideo on 3 February 1807. Unfortunately however they were unable to obtain any assistance from the inhabitants in overthrowing the Spanish colonial power and Murray eventually returned home to Portsmouth via Cork in January 1808.

Having retired to Chichester he became a leading member of the society in that city and from 1815 served as the lord mayor. In the meantime he had been promoted vice-admiral on 25 October 1809 and created a K.C.B. on 2 January 1815.

He married Ann Teesdale, the daughter of a colonel, on 15 September 1795. She survived him by forty years and died at Boulogne in 1859. The couple had a son, George St. Vincent Thomas Nelson Murray.

Murray was apparently of a mild and gentle disposition, and in addition to his knowledge of the French language and culture was also a proficient surveyor. He was held in high regard not only by Nelson, but also by Admiral Lord Howe. Admiral Sir George Montagu was a good friend of his father, whilst in turn Murray was a patron of Captain Sir John Phillimore. The Ship Hotel in Chichester was originally built as a residence by Murray.