1734-1808. He was born on 2 March 1734, the fifth son of James Pasley of Craig, Dumfriesshire, and of his wife, Magdalen Elliott. He was the uncle of Vice-Admiral Sir Charles Malcolm, Admiral Sir Pulteney Malcolm, and Admiral Sir Thomas Briggs. 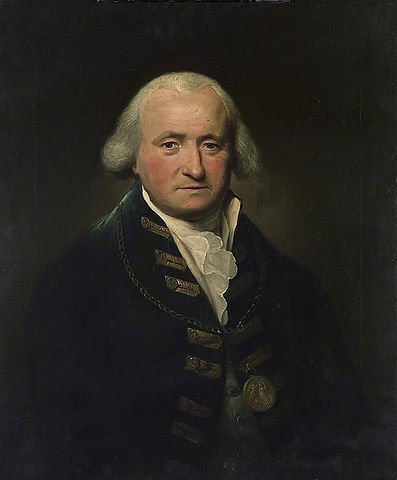 He returned to England in 1757 with Captain Digby from the West Indies as an acting-lieutenant aboard the Biddeford 20, which vessel had been carrying bullion to the value of 300,000 guineas, and which treasure Pasley was charged with transporting safely to London and the Bank of England. Returning to Portsmouth, he joined the Dunkirk 60 to which Digby had been appointed, and following the unfortunate Rochefort Expedition and the return of the ship to Portsmouth he was commissioned lieutenant on 10 October 1757. Thereafter he had a brief spell with the fire-ship Roman Emperor, Commander William Newsom.

At his own request Pasley transferred shortly afterwards to the Hussar 28, commanded by his kinsman, Captain John Elliott, whom he followed to the Aeolus 32 as her second lieutenant. He was subsequently present at the capture of the Mignonne 20 off the French coast on 19 March 1759, and in December he captured a French vessel in the frigate’s barge after the Aeolus had been ordered to harry the French coast near the recently occupied Isle de Dieu. He was later present in the engagement with Commodore Thurot’s squadron off Ireland on 28 February 1760 where he led the boarders in capturing the French frigate Belleisle, and he thereafter remained aboard the Aeolus as her first lieutenant, the frigate being commanded from the summer of 1761 by Captain William Hotham.

On 9 August 1762 Pasley was appointed commander of the sloop Albany 10, operating out of Milford, and after paying her off at Woolwich in early 1763 he had the Ranger 8, serving in Irish waters from July 1763 until 1766.

In March 1769 he commissioned the Weazle 16, going out to West Africa in June, and again in February 1770. Whilst employed off the African coast a sickness wreaked such havoc aboard the Weazle that he was forced to press some seaman out of a merchant vessel in order to get her home, this being one of the rare occasions that men were pressed into the service during peacetime. He resumed his duty with a fresh crew, but on the threatened dispute with Spain in 1770 he was sent in the sloop Pomona 18 to the Clyde to press men for the fleet before taking her down to Plymouth in the following spring to pay her off. On 21 July 1771 he was posted captain of the Seahorse 20, going out from the Thames to the Leeward Islands in August, and retaining her until returning home in early 1773.

From the late summer of 1776 Pasley captained the Glasgow 20, with which he escorted a convoy of over one hundred and twenty sail out to the West Indies. During the summer of 1777 he took a number of prizes off the West Caicos Islands, and he also saw service on the Jamaican station and off Rhode Island in 1778 before returning home.

He commissioned the new Sibyl 28 in October 1778, going out to Newfoundland in the following spring, and in retuning to European waters he captured the Salem privateer Rambler 14 whilst on passage to Lisbon on 21 October 1779, and the Coruna-bound Spanish packet Patagon 16 on 8 November. He was then engaged in convoy duty to the Cape during the following year.

In late 1780 Pasley was appointed to the Jupiter 50, and in the spring of the following year he joined Commodore George Johnstone s East India-bound force, and was thus present at the Battle of Porto Praya on 16 April 1781, and the ensuing attack on a Dutch East Indiaman squadron in Saldanha Bay. He was then sent in company with the Rattlesnake 14, Commander Phillipe d Auvergne, to investigate whether the barren two mile wide island of Trinidade, some seven hundred miles off Brazil, would be viable as a staging-post for the East India trade.

After returning to England in the winter of 1781 he saw service in home waters where he captured the privateer Boulogne on 8 March 1782. In May he conveyed Admiral Hugh Pigot out to assume the command of the Leeward Islands station, and he remained in the Caribbean until the peace, during which time he captured a French schooner carrying 3,000 dollars, and five merchantmen on one day off Havana. At the conclusion of this action the Jupiter stuck fast on a shoal, and two Spanish sail of the line, one of 84 guns and another of 64 guns, were sent to capture her. Although she was refloated, the larger Spanish vessel rapidly gained on the Jupiter in the subsequent chase so that Pasley was obliged to shorten sail and await an engagement. This the Spanish declined. Some time afterwards the Jupiter s crew fell victim to a severe outbreak of scurvy off Brazil, and Pasley later claimed that he was able to alleviate a great deal of the men s suffering by laying them out on the earth of his on-board garden. After returning to England he paid his command off at Chatham in July 1783. 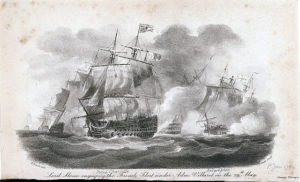 The Bellerophon, on the right of the picture, seconds the Queen Charlotte at the Battle of the glorious first of June in 1794

Pasley was appointed the commander-in-chief in the Medway with his broad pennant aboard the Vengeance 74 in 1788, and after recommissioning the Scipio 64 in March 1790 he commissioned the new Bellerophon 74 at Chatham in July, joining the Downs squadron in August and seeing service in the Channel from the end of September during the Spanish Armament of 1790. Resuming his command in the Medway following the settlement of the dispute, he remained in that post for the next three years, during which time the Bellerophon was paid off at Chatham on 9 September 1791, following the end of the Russian Armament, and he hoisted his broad pennant once more aboard the Vengeance.

In March 1793 Pasley recommissioned the Bellerophon and returned to the Channel where he raised his broad pennant as a commodore on 11 September, participating in the fleet cruise of October-December 1793, and being active in the chase of Rear-Admiral Vanstabel s squadron on 18 November when he was obliged to escape from the majority of the French ships. During the winter he enjoyed a period of leave with his family in Winchester, and from the following January Captain William Johnstone Hope served as his flag captain.

He was advanced to the rank of rear-admiral on 12 April 1794, and he commanded the first division of the van squadron in the Channel Fleet, leading an attack on the French rear on 28 May, but being badly wounded at the Battle of the Glorious First of June where he lost a leg to an eighteen pound ball. Whilst spending some time recovering in Haslar Hospital he was awarded a pension of 1,000 guineas, and he was created a baronet on 26 July.

Pasley was advanced to the rank of vice-admiral on 1 June 1795, and during the mutinies on the North Sea station from 27 May 1797 and at the Nore from 12 May he acted as a go-between with the disaffected men for the Admiralty. He later presided over the court-martial of the chief mutineer at the Nore, Richard Parker, and from 1798 he commanded the Nore station. He transferred to the chief command at Plymouth in March 1799, which post he retained until 1802 with his flag aboard the Cambridge 80, Captain John Wickey, and from the beginning of 1801 Captain Charles Henry Lane. He was further advanced to the rank of admiral on 1 January 1801.

Pasley died of dropsy of the chest on 29 November 1808 at his estate near Winchester, Hampshire.

In 1774 he married Mary Heywood, the daughter of the chief justice of the Isle of Man, and the aunt of Captain Peter Heywood. She died at Avignon on 26 April 1788 having had issue two daughters. His grandson, Sir Thomas Sabine Pasley, inherited his baronetcy and after entering the service in 1817 also achieved flag rank.

A large thickset man, Pasley was a friend of Admiral Sir George Montagu and obtained a berth on the Providence, Captain William Bligh, for the future explorer Matthew Flinders, in 1791. He was regarded as a strict but fair officer with a kindly visage and disposition who inspired loyalty and respect in his men. Captain Lord Cranstoun, who succeeded him in command of the Bellerophon, blamed Pasley for having allowed a lax disciple to build up on the vessel. During his tenure at Plymouth he earned a reputation for his benevolent hospitality, and in particular he loved the game of chess.