1738-1828. He was born on 17 December 1738 at Blackheath, the only son of Robert Hamond, a merchant and multiple ship-owner from Blackheath, and of his wife Susanna, daughter of Robert Snape. He was the father of Admiral of the Fleet Sir Graham Eden Hamond, and uncle of Captain Sir Andrew Snape Douglas.

Hamond entered the navy in 1753 and on 18 June 1759 was appointed a lieutenant in the Magnanime 64, commanded by Captain Lord Howe, which vessel was first into the action at the Battle of Quiberon Bay on 20 November. During April1763 he commissioned the cutter Grace 6 for service in the Solent, retaining her until the following year.

On 20 June 1765 he was promoted commander, and from 1767 had the sloop Savage 8, coming home from Lisbon in the spring of 1768, and which he nearly lost in rough weather after leaving Ireland for Portsmouth in March 1769, the sloop only staying afloat with half of the crew at the pumps having thrown the guns overboard. She later went out to Newfoundland in June 1769, returning to Portsmouth in September and being paid off in 1770.

On 7 December 1770 Hamond was posted captain and he commissioned the new Barfleur 90 at Portsmouth as the flag-captain designate to Rear-Admiral Lord Howe in the Mediterranean in the event of war with Spain. When the dispute was amicably settled his command remained as a guardship at Portsmouth. In the meantime, in January 1771, he recommissioned the frigate Arethusa 38 for service initially in home waters, and from October of that year in North America where he remained until being paid off in 1773. 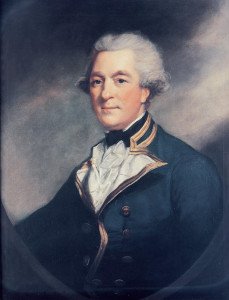 In July 1775 he was appointed to commission the new Roebuck 44 at Chatham, serving in the Channel and then sailing in September for the North American station where he remained bar a cruise with several frigates to the West Indies in the following year. During May 1776 the Roebuck was stationed in the Delaware with the Liverpool 28, Captain Henry Bellew, where on the afternoon of the 9th they were attacked by a host of small rebel craft coming down from Mud Island. The Roebuck grounded during this action, was re-floated during the night, but the next day both vessels were obliged to retire downriver when the attack was resumed. Hamond s command later took part in New York campaign of July – October 1776.

In 1777 she briefly visited Newfoundland and then cruised off Cape Henlopen for several months, capturing the rebel ships Defence 14 on 2 April in company with the Perseus 20, Captain Hon. George Keith Elphinstone, and the sloop Sachem 10 three days later. After meeting Vice-Admiral Lord Howe s fleet and advising on the feasibility of investing the Delaware Hamond served in the Philadelphia campaign from 25 August to 22 November 1777, leading the initial clearance of the American obstacles in that river. He remained in command of naval forces off Philadelphia throughout the winter, and following the city s evacuation commanded a squadron off the Chesapeake. During July 1778 he served at the defence of Sandy Hook and in August 1778 in operations off Rhode Island, for which he was knighted. On 24 February 1779 the Roebuck took the rebel privateer Revenge, and after a refit at Woolwich that spring captured the privateer Lady Washington on 5 December. In April 1780 Vice-Admiral Marriot Arbuthnot hoisted his flag on the Roebuck during the activity which resulted in the reduction of Charleston on 11 May 1780, and Hamond was sent home later in the year with the despatches aboard the Perseus with Captain Hon. George Keith Elphinstone.

At the end of October 1780 he was appointed lieutenant- governor of Nova Scotia and resident commissioner at Halifax assuming the role of commander-in-chief of that station. He fully expected to be appointed governor but in the event a new man was sent out to assume this civilian post in the summer of 1782, and although Hamond angrily resigned his lieutenant-governor role he remained in his naval duties until January 1783.

On 10 December 1783 he was created a baronet, and from 1785-8 was commander-in-chief at the Nore with his broad pennant in the Irresistible 74, his son being rated captain s servant. During the Spanish Armament of 1790 he commissioned the new Vanguard 74, being paid off in September 1791 following the Russian Armament, and afterwards had the guardship Bedford 74 at Portsmouth from September 1791 through to the beginning of 1793, flying the flag of Vice-Admiral Mark Milbanke. He then commanded the Duke 98 from March 1793, as well as sitting on the court-martial into the Bounty mutineers in 1792, subsequent to the mutiny aboard Captain Bligh s unhappy ship on 28 May 1789.

In the spring of 1793 Hamond accepted an appointment as a commissioner of the navy, and in February 1794 became deputy comptroller of the navy at Somerset House, taking on the role of comptroller as well as head of the Navy Board from 30 August, and remaining in this position despite changes of government until 1806. When he finally left office it was with the compensation of a huge and coveted pension of 1,500 guineas although by then doubts as to the credibility of his tenure had been raised, not least because during August 1802 he was obliged to defend both himself and the Board of Admiralty against Admiral Lord St. Vincent s accusations of fraud.

In 1809 he purchased the Terrington estate near Lynn in Norfolk where he died on 12 September 1828, being of sound intellect to the end. Such was his venerability that but for his civil appointments he would have achieved the ultimate rank of admiral of the fleet.

He married Cecilia Sutherland on 11 April 1763 at St. Margaret Pattens, London and had no issue. After her death he married in 1779 Anne, the only daughter and heiress of Major Henry Graeme of Hanwell Heath, Middlesex, who died in 1786 whilst serving as lieutenant-governor of St. Helena. Hamond had issue from his second marriage a daughter, Caroline, who was married in 1804 to a grandson of Viscount Hood, and a son, Admiral of the Fleet Sir Graham Eden Hamond. His residence was Holly Grove, Berkshire and at the turn of the century he also had a house in Fulham.

Despite an early friendship that remained cordial until 1802, he was one of the many officers disliked by Lord St Vincent, mainly for his peculation when in control of the Navy Board, where he wasted no opportunity in lining his pocket, and cut a far different figure to that of the dashing, cool and resolute captain of his youth. Midshipmen coming to Somerset House hoping to be made lieutenant did so in the knowledge that they were sure to get little sympathy or favouritism from the feared Hamond. By 1801 he was seen as having a warped character and was known as the jobbing comptroller who was protected by people of influence, especially William Pitt. Nevertheless his reputation survived and in old age he was revered for his daring exploits in the Roebuck and regarded as a wise old counsellor by younger politicians

From 1796-1806 he was M.P. for Ipswich, and he was also a Fellow of the Royal Society and one of eleven Brethren of the Trinity House. He was a friend and correspondent of Vice-Admiral Lord Nelson, and a patron of Captain Josias Rogers. Apparently his handwriting was exquisite, his memory excellent, and his mind very sharp.