1731-98. He was the second son of John Sawyer, the M.P. for Downton, by his wife, Anne Duncombe, the sister of Lord Feversham.

In 1747 Sawyer entered the navy, spending three years in the West Indies aboard the Gloucester 50, Commodore George Townshend. He passed his examination for lieutenant on 30 August 1753 and was commissioned on 4 March 1756. In the following year he served aboard the Grafton 68, Captain Thomas Cornewall, flying the broad pennant of Commodore Charles Holmes off Louisbourg.

On 19 May 1758 he was promoted to the command of the sloop Happy 8, and by October was serving in the sloop Swallow under the orders of Captain Hon. Richard Howe off the coast of France. He was posted to the Chesterfield 44 on 26 December, moving to the Active 28 shortly afterwards and taking her out to the Mediterranean in April 1759. 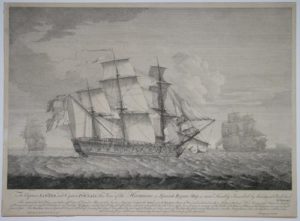 On 21 May 1762, being in company with the sloop Favourite, Commander Philemon Pownall, he captured the treasure ship Hermione which was in passage from Lima to Cadiz, the British officers enjoying a great advantage over their Spanish counterparts who were unaware of the commencement of hostilities. Sawyer s own share of the prize amounted to 65,053 guineas, a sum that was almost without parallel for a naval officer, even though he shared this with Captain Charles Medows, the future Viscount Newark and Earl Manvers, in accord with their agreement to pool any prize-money. The Active was eventually paid off at the end of the Seven Years War in 1763.

Sawyer remained unemployed and revelled in his riches until 1777 when he was appointed to the Boyne 70, serving in home and Irish waters, and in the following spring he went out to join Rear-Admiral Hon. Samuel Barrington in the Leeward Islands. The Boyne participated in the marvellous defence of St. Lucia on 15 December 1778, where Sawyer famously commanded his vessel from a chair on the quarterdeck after being wounded. At the Battle of Grenada on 6 July 1779 his ship was one of three in the van which engaged the whole French line whilst the rest of the British fleet lay becalmed, suffering casualties of twelve men killed and thirty wounded.

In the autumn Sawyer returned to Britain and from the latter part of 1780 he commanded the Namur 90 in the Channel, participating in the campaigns of June-December, June-November 1781, and the relief of Gibraltar on 12 April 1781. However, when the Namur was sent out to the West Indies in December Sawyer preferred to resign his commission, and he was not re-employed during the remainder of the American Revolutionary War.

From 1783 he commanded the guardship Bombay Castle 74 at Plymouth for two years, and from 1785 until the end of 1788 he was commodore and commander-in-chief at Halifax as a replacement for the recalled Commodore Sir Charles Douglas. Arriving in June with his flag aboard the Thisbe 28, Captain Isaac Coffin, he later shifted it to the Assistance 50, Captain William Bentinck, and when that officer was suspended in November 1785 his flag captain became his apparent kinsman, Captain Nicholas Sawyer.

In April 1787 his flag was transferred to the poorly disciplined Leander 50, commanded by the equally poorly regarded Captain Sir James Barclay with whom he returned to England in August 1788.

Sawyer was promoted rear admiral on 24 September 1787, and he flew his flag aboard the Windsor Castle 98, Captain Sir James Barclay, in the Channel during the Spanish Armament of 1790.

Sawyer married Anne Majendie of Lisbon in the early 1760 s and had issue two sons and a large number of daughters. His eldest son, the tyrannical Sir Herbert Sawyer, died as an admiral in 1833. His second son, Charles Sawyer, rose to the rank of captain but was renowned for inviting young men to his cabin and assaulting them, and after being court-martialled was dismissed the service on a charge of indecent familiarities . His eldest daughter, Sophia, died at Halifax in 1788, and another daughter married Captain Charles Hope, thereby making him the grandfather of Admiral Sir Henry Hope. Sawyer s address in his will was given as Wellington Court, Somerset.

Prior to the capture of the Hermione Sawyer had sought the hand in marriage of his future wife, as had Captain Pownall of her sister, but they had been rejected by the girls wealthy Lisbon-based father because of their poor economic prospects. Subsequent to the capture of the Hermione the two officers returned, found that the father had been impoverished in the aftermath of an earthquake, and were promptly accepted into the family.

Sawyer was on poor terms with his captains when commanding at Halifax, although they in turn were regarded as unusually inefficient.