1760-1835. Born in County Cavan, Ireland, he was the third son of Peter Tyler, a captain of the 52nd Regiment who fought at the Battle of Bunker Hill, and who had married Hon. Anne Maria Roper, the daughter of the 8th Lord Teynham.

In 1771 Tyler entered aboard the guardship Barfleur 98 at Chatham as a servant to Captain Andrew Snape Hamond. When the latter moved to the Arethusa 32 on the North American station Tyler went with him, before transferring in 1774 on that station to the Preston 50, Captain John Robinson, flagship of the commander-in-chief, Vice-Admiral Samuel Graves, which afterwards flew the broad pennant of Commodore William Hotham. In 1777 he sustained an injury to his left leg which left him on crutches for the next two years, and which afflicted him afterwards with a permanent lameness. He officially left the Preston in August 1778. 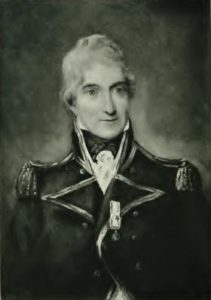 He was commissioned lieutenant on 5 April 1779 and joined the Culloden 74, Captain George Balfour, serving in the Channel where in September of the following year he moved to the Britannia 100, Captain James Bradby, the flagship of the commander-in-chief, Vice-Admiral George Darby. Accordingly he would have been present at the Second Relief of Gibraltar on 12 April 1781 and in Rear-Admiral Kempenfelt s brilliant attack on a French convoy on 12 December, on which occasion the Britannia was commanded as a private ship by Captain Bradby. Tyler removed in May 1782 to the Edgar 74, Captains John Moutray and William Cayley, flying the broad pennant of Commodore William Hotham in the Channel, and in which ship he was present at the Third Relief of Gibraltar in October, and at the subsequent skirmish with the Spanish fleet off Cape Spartel.

On 31 December 1782 Tyler was promoted commander, and he joined the armed ship Queen, stationed at North Shields and engaged in convoy duty in the North Sea to counter enemy privateers.

Following the peace Tyler was appointed to the armed ship Chapman in July 1783, remaining on the North Sea station until early 1785 when he removed to Milford Haven in command of the sloop Trimmer 16, being employed in home waters and in anti-smuggling operations in the Bristol Channel. This service came to an end in March 1789, whereupon he retired ashore for nine months.

In May 1790 he joined the recommissioned fireship Tisiphone 8 for service with the Grand Fleet during the Spanish Armament, being one of many officers posted captain on 21 September with an appointment to the out of service frigate Maidstone 28 for purposes of rank only.

In March 1793, following the start of the French Revolutionary War, Tyler was appointed to the newly commissioned frigate Meleager 32, which was attached to Vice-Admiral Lord Hood s Mediterranean Fleet after going out in May with Vice-Admiral William Hotham s squadron. He saw some service in the occupation of Toulon in addition to running errands up into the Mediterranean. During the spring of 1794 he was appointed to the San Fiorenzo 36, a prize taken at Calvi in the course of the Corsican campaign, which he had been instrumental in salvaging.

In August 1794 he transferred to the Diadem 64, remaining in the Mediterranean Fleet where in May of the following year he was the victim of pre-meditated insubordination by an army officer serving aboard his command in lieu of a marine subordinate. In what became a test case the navy court-martialled Lieutenant Gerald Fitzgerald of the 11th Regiment, the officer concerned, and he was duly cashiered. The Duke of York then reversed the decision, implying that soldiers could only be subject to military rule, with the result that henceforth marines replaced all soldiers aboard the ships of the fleet.

Tyler was present in the Battle of Genoa with the French on 13-14 March 1795, losing three men killed and seven wounded, and the Battle of Hyeres on 13 July. In September he was despatched on a cruise to the south of Sardinia with the Romulus 36, Captain George Johnstone Hope, in which the two vessels took five French prizes. Later in the year, after briefly leading a small squadron in the Adriatic, Tyler and the Diadem were attached to Commodore Horatio Nelson s squadron off Genoa and the Italian coast.

In February 1796 Tyler was appointed to the frigate Aigle 36, which he took up the Adriatic in September with a squadron of five frigates under his command to act in concert with the Austrian Army before rejoining the fleet with his squadron shortly after the Battle of Cape St. Vincent on 14 February 1797. Remaining off the Iberian Atlantic coast, the Aigle enjoyed some success against the enemy privateers including the capture of the Harriotte 6 off Lisbon on 12 June 1797, the Hazard 8 off Cape Finisterre on 30 July, being in company with the Boston 32, Captain James Nicoll Morris, the Manche 8 off Portugal on 13 August, the Minerve 4 on 1 December, and the Requin 20 off Corunna on 4 January 1798.

On 18 July 1798 the Aigle s career came to an end when she was wrecked on Plane Island off Cape Farina, Tunis whilst attempting to deliver despatches from Admiral Earl of St. Vincent to Rear-Admiral Sir Horatio Nelson during the campaign that resulted in the Battle of the Nile on 1 August. All the crew managed to scramble on to the barren island, from where they were thankfully rescued by a local brig, whereupon the wreck of the Aigle was set afire. At the subsequent court martial aboard the Prince 98 at Gibraltar two months later, presided over by Rear-Admiral Sir Roger Curtis, Tyler and his officers were acquitted of blame over the Aigle s loss, and he returned to Portsmouth at the end of November aboard the Orion 74, Captain Sir James Saumarez.

After wintering ashore at Pembroke Tyler was appointed to the Warrior 74 in February 1799, and taking passage out aboard the Thames 32, Captain William Lukin, to join her in the Mediterranean Fleet off Cadiz, he served in the campaign that followed the breakout of the Brest fleet on 25 April 1799. In August the Warrior returned home for a refit, and thereafter she was attached to the Channel Fleet, spending the following winter in home waters. In early April 1800 she sailed from Portsmouth to join the fleet, but in June was forced into Portsmouth to repair storm damage. Putting back to sea in August, she spent the rest of the summer in blockade duty off Brest before returning to home waters in the autumn.

In early 1801 the Warrior was seconded to the Baltic Fleet under Admiral Sir Hyde Parker, but she did not participate in the Battle of Copenhagen on 2 April, as she formed part of the commander-in-chief s reserve. After voyaging around Ireland to Cork in search of a French fleet that failed to appear the Warrior had a stint off Cadiz under the orders of Rear-Admiral Sir James Saumarez.

In January 1802 Tyler was sent in command of a small squadron otherwise consisting of the Bellona 74, Captain Thomas Hoar Bertie, Zealous 74, Captain Samuel Hood Linzee, and Defence 74, Captain Lord Henry Paulet, to join Rear-Admiral Sir John Duckworth in the West Indies where he remained until June. After returning to England in July the Warrior was paid off and Tyler remained unemployed for the next year. 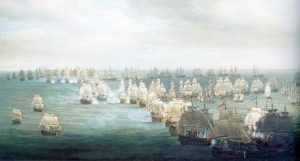 On the resumption of war with France in May 1803, and despite his wish for active employment at sea, Tyler found himself in command of a Sea Fencibles detachment based at Pembroke, which extended from Kidwelly to Cardigan. It was not until February 1805 that he replaced the late Captain William Henry Jervis aboard the Nile prize Tonnant 80, then lying at Plymouth, and he served in the Channel until the early summer.

Next being ordered to join Vice-Admiral Cuthbert Collingwood s squadron off Cadiz, the Tonnant spent two months cruising in the Mediterranean under the orders of Rear-Admiral Sir Richard Bickerton before returning to the fleet off Cadiz on 22 August 1805. Tyler subsequently fought at the Battle of Trafalgar on 21 October where his ship suffered twenty-six fatalities and fifty men wounded, and where he was badly injured in the thigh by a musket ball in the early stages of the engagement, being subsequently granted a pension of 250 guineas a year. During the battle, in which his ship was fourth in Collingwood s line but was overtaken by two other vessels in her approach to the action, the Tonnant devastated the Monarca 74, took possession of the Alg siras 74 after a particularly bloody conflict, and forced the surrender of the San Juan de Nepomuceno 74. However, both the Monarca and San Juan de Nepomuceno re-hoisted their colours.

After convalescing for three weeks at Gibraltar Tyler sailed aboard the Tonnant to Spithead where she arrived on 1 December. Such was his incapacity that he was obliged to walk with a crutch for some time, and thus he found it necessary to apply for an acting-captain in the following February, being replaced thereafter by Captain Thomas Browne.

By the spring of 1807 Tyler had recovered sufficiently to seek employment, but other than the offer of a shore-going position none was forthcoming. On 28 April 1808 he was promoted rear-admiral, and in May he became the second-in-command at Portsmouth, hoisting his flag aboard the Gladiator 44, Lieutenant John Price. Active employment followed almost immediately, for in June he raised his flag aboard the Barfleur 98, Captain Donald M Cleod, as second in command to Admiral Sir Charles Cotton off Lisbon. When that officer received the surrender of the Russian fleet Tyler was charged with escorting Rear-Admiral Seniavin s ships to England following the Convention of Cintra on 30 August. In command of an escorting squadron of eight sail of the line he reached St. Helens on 7 October, where he struck his flag a month later.

For the next four years he remained unemployed, despite further requests for a position, and during which time he turned down a command at Malta for a wish for something more substantial. Finally, following Hon. Robert Stopford s request to come home, he was appointed commander-in-chief at the Cape in 1812. Raising his flag on 2 October at Spithead aboard the Semiramis 36, Captain Charles Richardson, he reached the Cape in January 1813 and transferred to the Lion 64, which from April was commanded by Captain Henderson Bain. He later transferred his flag to the Medway 74, Captain Augustus Brine, and sailing for home with this flagship in January 1816 he retired from active service on arriving in March to reside at Cottrell House, Glamorgan.

He was twice married, firstly in April 1783 in Hampshire to Anne Rice of Hambledon, who was the daughter of a surgeon, Charles Rice, and has been stated as being the widow of a Captain Pike of the Royal Navy. This lady died in 1784. He was married secondly on 25 March 1788 at St. Mary s Church, Pembroke to Margaret Leach of that town, who predeceased him by two months. The only son from his first marriage, Charles Tyler, retired as a captain in 1844, having entered the navy in 1793, served with his father on the Aigle and Warrior, and then ran away from his ship with a Neapolitan dancer at Malta in 1805 before later rejoining the service. Sir George Tyler, 1792-1862, the eldest son from his second marriage, entered the navy in 1809, lost his right arm in a boat attack in Quiberon Bay in 1811 whilst employed on the Spartan 38, Captain Edward Pelham Brenton, and later served as flag-lieutenant to his father at the Cape. He became a commander in 1815, a captain in 1822 and from 1833-40 was the lieutenant-governor of St. Vincent. He was advanced to the rank of rear-admiral in 1852, vice-admiral in 1857 and died in 1862. Tyler also had four elder daughters and a second son who entered the clergy from his second marriage.

Tyler was described as a good-hearted gentleman . His early career was patronised by Admiral Lord Hotham, and he himself was a patron of Captain George Nicholas Hardinge. He was distantly related to the eminent Whig politician Lord Camden.