Little is known of Goodall’s origins and beginnings other than that he entered the navy in the 1750’s. Having been commissioned lieutenant on 1 September 1756 he was promoted commander of the sloop Hazard 8 on 2 June 1760, serving in the North Sea. On 7 August he captured the French privateer Duc d’Ayen 8 which was at anchor off Egersund on the south-west coast of Norway, resulting in much correspondence over this alleged infringement of Danish neutrality, with Goodall insisting that the Frenchman had taken prizes within a league of the shore and that the Danes had failed to offer any neutrals their protection.

Having gone out to the West Indies, he was posted captain on 3 January 1762 and appointed to the Mercury 20 in which he served at the reduction of Havana in the summer, and in the following year off Georgia. Returning home to pay the Mercury off in June 1764, he commissioned the new Winchelsea 32 for the Mediterranean in February 1769, and in the following year was at Leghorn and off Smyrna in Turkey where he was instructed to protect British interests following the Russian-Turkish battle at Chesme Bay. During 1771 he was back in the western Mediterranean, and by May of the following year had returned to Portsmouth where his command was paid off.

In February 1778 Goodall commissioned the new Defiance 64, and on 27 July 1778 commanded her at the Battle of Ushant, suffering casualties of eight men killed and seventeen men wounded. At the end of the year he served in Vice-Admiral Lord Molyneux Shuldham’s fleet which escorted a number of convoys out of Portsmouth.

During the early part of 1779 he transferred to the Valiant 74, serving in the Channel, and in April was a member of the court martial that investigated Vice-Admiral Sir Hugh Palliser’s conduct at the Battle of Ushant. The Valiant participated in the Channel fleet s retreat of August 1779, and was with Commodore Charles Fielding s squadron in the Channel that detained a Dutch convoy commanded by Count Van Bylandt on 31 December 1779. He participated from September of the following year in the June-December 1780 Channel Fleet campaign, and on 4 January 1781, in company with the Courageux 74, Captain Lord Mulgrave, he captured the French frigate Minerve 32 after a most gallant resistance. This ship, the ex-British Minerva, was appropriately bought into the navy as the Recovery. The Valiant was subsequently present at the Relief of Gibraltar on 12 April 1781, and at Rear-Admiral Richard Kempenfelt’s action with De Guichen on 12 December 1781, as well as the Channel fleet campaign from June to November of that year.

In early 1782 he proceeded with Admiral Sir George Rodney to the Leeward Islands, arriving at the end of February. He commanded the Valiant at the Battle of the Saintes on 12 April 1782, where he lost a lieutenant and nine men killed in addition to another lieutenant, the master, and twenty-six men wounded. In the aftermath of the battle the Valiant’s speed allowed her to out-sail her consorts in the Mona Passage on 19 April and force the surrender of both the damaged Caton 64 and the Jason 64, a not inconsiderable feat given that each of the ships outmanned his. After sailing north with Admiral Hugh Pigot in July, and then returning to join the blockade of Cap François at the end of the year, the Valiant briefly saw service at Jamaica in 1783 and returned to England at the peace, being paid off in the early summer of 1783.

During 1789 Goodall commanded a squadron of observation numbering seven sail of the line in the Channel with his broad pennant aboard the Carnatic 74, Captain John Ford, and he staged a mock battle for the delectation of the King during the Plymouth Naval Review of 18 August. In October 1790 he was a member of the court-martial that tried Captain William Bligh for the loss of the Bounty on 28 April 1789, and he commanded the Gibraltar 80 during the Spanish Armament of 1790, having commissioned her in May. On 21 September 1790 he was promoted rear-admiral, raising his flag in the Channel aboard the London 98, Captain George Westcott. He was also employed with this ship and officer under Vice-Admiral Lord Hood during the Russian armament of 1791, and in June 1792 with his flag in the Romney 50, Captain William Domett, he went out to the Mediterranean as commander-in-chief. 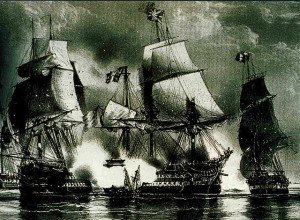 In April 1793, having returned home with the Romney, he raised his flag aboard the Princess Royal 98, Captain John Child Purvis, and went out to the Mediterranean once more where he served with Vice-Admiral Lord Hood s fleet at the Occupation of Toulon from August 1793, and became the city’s governor pending the arrival of a diplomat to fill that post. Thereafter he was praised for his conduct in the Corsican campaign which began on 8 February 1794.

Goodall was promoted vice-admiral on 12 April 1794 and was second in command to Vice-Admiral William Hotham in the Mediterranean during 1795, being conspicuous with Captain Horatio Nelson in trying to get the commander in chief to continue the action with the French on 13-14 March at the Battle of Genoa, his flagship losing three men killed and eight wounded in that engagement. He later fought at the Battle of the Hyères Islands on 13 July, but at the end of the year struck his flag, supposedly as a consequence of his discontent at not having been offered the command of the fleet on Hotham’s retirement.

Goodall became an admiral on 14 February 1799 and died at Teignmouth on 21 April 1801, his funeral being somewhat of a curiosity in so much that his coffin was borne by six aged seamen in the company of six maidens. He had never married.

He was highly esteemed by Nelson with whom he maintained a regular correspondence. His character can be best illustrated by his display of fury with Admiral Hotham during the insipid actions with the French in 1795, where he even resorted to kicking his hat around the deck, so incandescent with rage was he when the commander-in-chief discontinued the action. A friend of Admiral Sir Hugh Palliser, he also displayed a kind disposition to his midshipman, allowing one future admiral, Lord Saumarez, to make use of his library