During the late autumn the government began receiving intelligence of a large French convoy that was congregating at Brest with a view to reinforcing their war effort in both the West and East Indies. Once it became apparent that this convoy would be escorted clear of the Bay of Biscay by the experienced and circumspect Vice-Admiral Louis-Urbain de Bou nic, the Comte de Guichen, it was decided that a force should be sent to intercept it. With the commander-in-chief of the Channel fleet, Vice-Admiral George Darby, suffering from poor health his fourth-in-command, the highly regarded Rear-Admiral Richard Kempenfelt, was selected to lead this task, and after fitting out a squadron at Portsmouth he eventually sailed on 2 December with twelve sail of the line and several frigates. 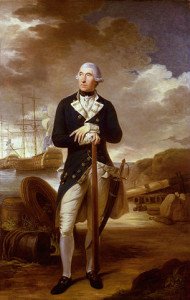 Initially the intelligence had indicated that only seven French sail of the line would comprise the escort of the convoy, but despite the lateness of the season, and because of the sheer importance to their war effort of the convoy, the French authorities at Brest had applied themselves assiduously to refitting as many ships as possible to support de Guichen. Thus by the time Kempenfelt sailed the actual number of French men-of-war had risen to nineteen, including five ships of over 100 guns. Nine sail of the line were to make for the West Indies in escort of the greater part of the convoy under Rear-Admiral Louis-Philippe de Rigaud, the Marquis de Vaudreuil, and this reinforcement would provide Admiral Francois Joseph Paul de Grasse-Tilli with the strength to attack Jamaica. Of the remainder, two sail of the line were destined for the East Indies with ships carrying troops and supplies for the French forces there, and eight sail of the line, including the five of over 100 cannon, were to continue under the orders of de Guichen to Cadiz and join a dozen Spanish in preventing any British relief of Minorca.

That Kempenfelt might be outnumbered by his French opponent was understood by the British Admiralty, but it was felt that if he were supplied with a flying squadron of swift copper-bottomed vessels he would at least be able to disrupt the French convoy. So it would prove.

Following days of squally weather Kempenfelt s scouting vessel, the fireship Tisiphone, Commander James Saumarez, sighted the one hundred-sail French convoy some one hundred and eighty miles to the south-west of Ushant soon after daylight on the murky and windy morning of 12 December. The French were themselves two days out of Brest and to leeward of the British, the wind being in the south-east. At about 10.30 a.m. the French men of war were identified further ahead and somewhat unaccountably to leeward of the convoy, although at this stage it was still impossible to gauge their true strength. It could nevertheless be seen that de Guichen was forming a line of battle, and so despite signalling his wish to form his own line of battle Kempenfelt resolved to deal with the convoy first and then tackle the men of war afterwards.

Keeping to windward of the enemy fleet and convoy, Kempenfelt maintained a parallel course until the French centre and rear divisions carelessly drifted apart, whereupon he crowded on sail and darted between de Guichen s line of battle and the convoy. The French Triomphant 84, which had been detached to collect the convoy, attempted to dispute the progress of the leading ship in the British van, the Edgar 74, by crossing her bows and unleashing a raking broadside. The Edgar, flying Commodore John Elliot s broad pendant, skilfully bore up and then luffed, thereby evading any great damage and presenting her full broadside to the Frenchman s stern. In this brisk and fierce action the Frenchman came off worse, losing a main-topmast and main-yard.

With the French men-of-war looking on helplessly in the heavy conditions to leeward, Kempenfelt was now able to pick off his prizes at will, and in total fifteen ships with over a thousand troops and other valuable stores were taken. Additionally two or three vessels were sunk, whilst others also struck their colours but could not be taken possession of. As the evening came on and even heavier weather set in, Kempenfelt tacked in order to rejoin several of his ships that had been left astern in the rampage through the convoy, and he then signalled his intention to form line of battle before putting about on the same tack as the French.

Daylight revealed the full extent of the French strength, so despite holding the weather-gauge Kempenfelt wisely declined an engagement with his superior opponent and instead made for Plymouth with his prizes. In so doing the British easily repelled a number of sorties from detached elements of the French fleet. Meanwhile the Tisiphone was despatched to warn Rear-Admiral Sir Samuel Hood in the Leeward Islands of the possible arrival of the remainder of the French convoy on that station.

In the following days the Agamemnon 64, which had been ordered to follow the remainder of the dispersed convoy with the frigate Prudente, took another five Martinique-bound merchantmen, and although, the Triomphant 84, Brave 74, and five transports did get through to the West Indies the remainder of the French vessels were forced to retire to Brest in disarray after a heavy storm on Christmas Day.

Upon details of the engagement becoming public many of his contemporaries proclaimed Kempenfelt s raid on the convoy to be the greatest tactical feat of the war, and his reputation, which prior to his achievement had been that of a diligent and innovative but largely unknown officer, soared to such an extent that by the time he rejoined the Channel fleet at Spithead on 20 December he had become a role model for all his subordinate officers. Even so, Kempenfelt vented his frustration at having been sent out by the Admiralty with such an inferior force to meet an enemy that his brilliance might have defeated.

Surprisingly, Kempenfelt s great feat was not good enough for some. The King felt that he should have remained in contact with the French and taken more troop ships, whilst both Admiral Sir George Rodney, who at this time was convalescing in England, and Rear-Admiral Sir Samuel Hood, argued that he should have proceeded with his ships to reinforce their station in the Leeward Islands rather than return to Plymouth. That said, Rodney could never trumpet the success of any other admiral above his own, Hood habitually moaned about his contemporaries, and events in the following year would show that in preventing the French from reinforcing their own West Indian fleets with anything more than the two 74 s and five transports Kempenfelt s inferior force had in fact paved the way for Rodney to achieve a comprehensive victory at the Battle of the Saintes.